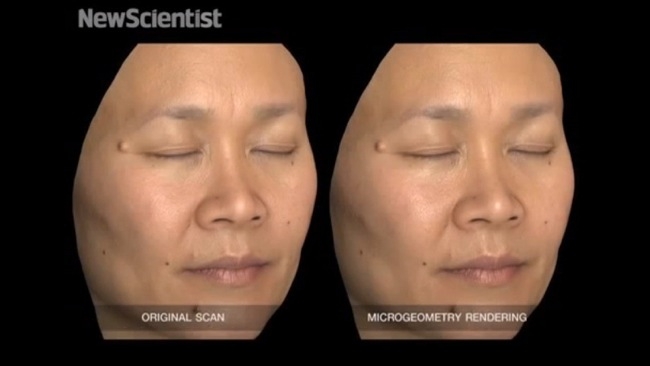 The Uncanny Valley is a virtual gulf between robots and animations looking convincing (on the surface) and actually convincing us. The trouble, it seems, is that the more "real" an animation gets, the more alarming to us it also gets.

Perhaps it's because we react badly to things that look real but aren't totally convincing. Perhaps they're imposters? Perhaps they're going to kill you? This is a modern problem whose roots go back hundreds of thousands of years, to a time when a twig snapping or a branch rustling might mean that something is nearby, and it wants to eat you.

Four light beams, each reacting to a different layer

New Scientist reports that researchers at the University of Southern California have applied a light reflection technique involving splitting a light beam into four, each reacting with a different layer of skin. In conjuntion with this they have used detailed 3D scans of real skin to create a method to accurately model individual skin pores.

Here is a video showing the result:

This looks impressive, but these are just still images. It would be good to see in the future how this looks when it is animated.

You can find an amazing demonstration from Nvidia here