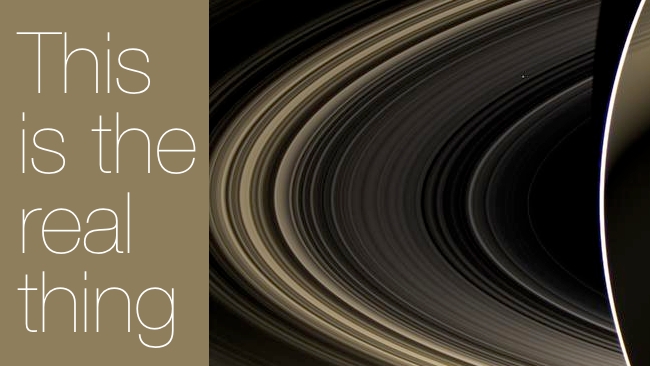 Well this is a coincidence! Yesterday we showed you this shot of the SpaceX Grasshopper craft on a test flight, looking more like a CGI creation than a real thing, and now, PetaPixel has brought our attention to this trailer for a film about Saturn which is in 4K definition, and achieves this pinnacle of resolution by being the result of years of work filmmaker and space-obsessive Stephen van Vurren

There's a definite space and CGI (or, specifically, not CGI) thing going on this weekend.

How does someone without their own interplanetary spacecraft make a 4K film about an planet that's around a billion miles from the Earth?

Stephen has taken the million or so shots from various craft that have been near or pointed themselves at the Earth and Saturn, and by stitching the photos together has created extremely high resolution animations simulating flypasts and close encounters.

This is another case of reality looking unreal. It makes your perception tilt a little on its axis, to use a planetary analogy.