"The other half of your camera". BulletProof: We interview its creator 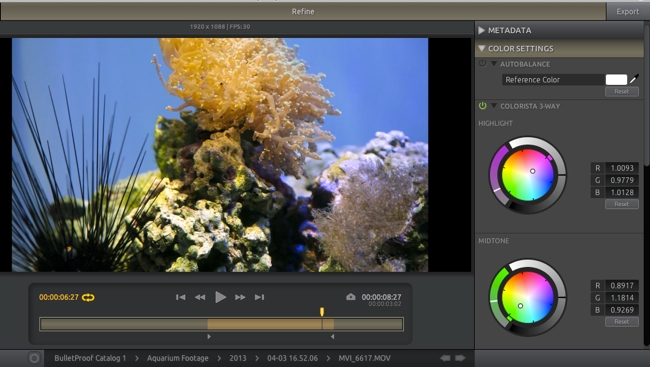 The birth of a new class of video software. BulletProof: it's designed to be "the other half of your camera".  We interview its creator, Sean Safreed from Red Giant software

RedShark (RS): At what point did you realise there was a need for software like BulletProof?

The idea has been discussed back in 2009 and I wrote the spec for what eventually became BulletProof in 2010.

RS: What was it that made you realize this? Was this something you perceived yourself or did your customers ask for it? (Virtually no-one asked for an iPad...).

As you know, we have a number of film makers that work with us, Stu Maschwitz, and Seth Worley. The form of BulletProof really started to come into shape when we started thinking about the problems that our own film makers were running into during a shoot. Red Giant Grinder solved the problem of getting footage into a nice edit-friendly codec like ProRes. But we realized that there were a bunch of other pieces that they needed to confidently deliver great looking footage to the editor. Things like metadata input, robust backup, and color correction were all things that we felt were a challenge for on our films. Even on a basic level there was some need to make the process of just generating things like H.264 format proxies easy. These features came together into BulletProof.

RS: How long did it take from planning to programming to testing to release?

We did early prototypes of the software in 2011 and had a version of the user interface built by February 2012. It has take us about 18 months to get to a release that we are happy with and want to put in customer's hands.

RS: File-based workflows change all the time so how does the architecture of BulletProof reflect the need to add to it and update it?

We designed BulletProof 1.0 for file-based workflows from the start and decided to target Canon DSLRs and GoPro cameras because that was what we were using and shooting with. There are plenty of other great cameras out but the best of the DSLRs today is the 5D mkIII. Yes, it has soft video, and yes it is missing a bunch of video friendly features but against that is a fantastic selection of lenses that no other manufacturer has been able to match. I personally have a number of different cameras including the Panasonic GH3 which shoots superb video.

We have built BulletProof with camera extensibility in mind. In fact our camera support is built as a plug-in that we can update without updating the entire application. This means more camera support, faster. When we talk about camera support, we also want to do it right. That means testing with data directly from a given camera model, making sure we can extract and display all the metadata the camera can supply accurately, and lastly making sure that the images that we produce look correct. Some formats like the .mov format on the GH3 would be easy to support (and in fact I can view and transcode those files now) but to truly support that camera, we want to make sure that we can support all the formats in the camera which includes movies in .mp4 format and in AVCHD. 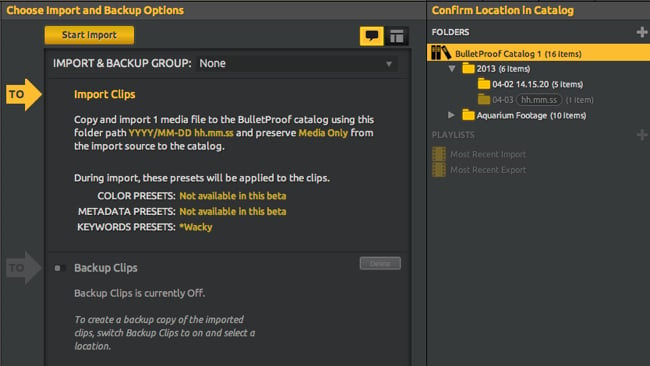 We will be aggressively adding more cameras in 2013 and 2014. You will see support for some of the high-end cameras like the Canon Cinema cameras as well as the Arri Alexa in ProRes and DNxHD format. We also want to support the ProRes recording mode on the BlackMagic cameras.

RS: How much of RedGiant's existing tech were you able to use in BulletProof?

We already had a multithreaded transcode engine built in Grinder and a big part of that is in BulletProof. We also moved a number of our color algorithms into the real time playback architecture of BullletProof as well. That is really only two components out of dozens. We have built a really extensible architecture with a true database storage to manage tens of thousands clips. We also created a web-centric client-server architecture for the app. That means we can work with data that lives on more than just a laptop. The client piece is also built on Chromium even though it runs on Mac OS and Windows to allow to use HTML, Javascript and CSS to create the user experience. Very few other applications in the video market that are built this way. You can imagine that gives us great flexibility in where we might run the interface in the future (*cough* iPad *cough*). But before we get there, we are going to get to Windows 7 and 8 in short order after shipping on the Mac.

RS: What is the reaction of "traditional" DITs to the product?

We spoke to a number of DITs long before we went to alpha about their challenges and needs from a tool like BulletProof. Their reaction has been overwhelmingly positive. They love that they can setup something like BulletProof to help out film makers on a shoot where they aren't the data wrangler so that they don't have to come in later in clean up somebody else's mess. While this does make it easier for a production assistant to do some of the work on set like backup and even footage prep, the DIT still has a crucial role to play in making sure that the media is not just backed up but looks correct and that shots don't have errors. BulletProof is really built for the DIT but we have tried to make it as easy to use as possible.

The reaction so for has been awesome. Over 10,000 (!) people signed up for the beta in a couple of weeks and in the first couple of days we got a few thousand installs. I couldn't be more pleased with the uptake. I think we struck a real chord with users that have been hungry for a tool like BulletProof.

Don't forget that the Beta software is still available for free download, but, remember, it is Beta!