The biggest DSLR story of the year! 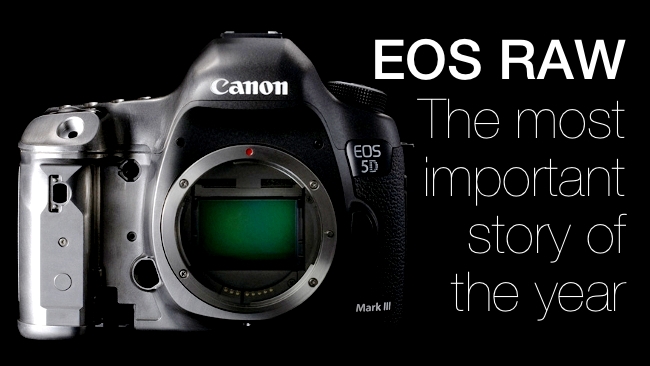 Think about this for a minute: what if Canon were to suddenly announce that their video-capable DSLRs could now output RAW video? That would be sensational, wouldn't it? At the very least it would be a candidate for the "biggest story of the year". Well, that's what happened yesterday. Almost

The difference is that it wasn't Canon making the announcement, but it was most certainly about their cameras.

Magic Lantern, already well known for their modifications (or "Hacks" depending on your commercial or legal perspective) has succeeded in extracting 1080p RAW video from a Canon EOS 5D mk III. So now, the full dynamic range of this camera's sensor is available as a moving image. And there are videos to prove it.

So, perhaps not as seismic a moment as if Canon themselves had announced this, but no less breathtaking from an interested bystander's point of view.

There are caveats. Lots of them. In fact there are more caveats than raw video at the moment, but that could all change. It's just all a bit uncertain.

At the end of this article, there's a link to Freya-Black's original article, penned on Sunday night as the news broke. If there are any more updates, we'll publish new articles and link to them from here.

How significant is this?

Meanwhile, what does this all mean? How significant is it for film-makers and industry vendors?

Well, RAW is the medium of the moment. It's what enables video to look like film (to oversimplify it). RAW video, straight from the sensor of a camera, requires a more complicated workflow, but it's worth it, because it contains so much more information than conventional Rec 709 video (the standard for HD TV). Which means that you can "stretch" it in post to give you virtually whatever look you want. It's an absolute gift for creative directors and editors, and the viewing public is starting to expect a rich and nuanced look to the films and videos that they watch.

With the normal 8 bit output from either the HDMI or the compressed media storage on DSLRs, there aren't enough bits to stretch or modify the signal much in any direction. Doing so risks unsightly banding as what should be smooth gradations between shades of the same colour start to resemble rainbow  staircases. If video is to replace film, it needs something better than that.

And it's because of these DSLR shortcomings that Canon itself has its "C" range of digital cinema cameras, the top end of which, the C500, does allow access to the RAW images. Canon makes its own sensors and these cameras have been widely praised for their images.

There's also Digital Bolex with their D16: not yet out but a very compelling product for certain types of filmmaking.

Arguably a Canon DSLR equipped with the Magic Lantern software would compete with all of these in one way or another, but I don't think they really do.

A bit of a hobby horse of mine but I'm not the only one that thinks this: with such a large sensor, focusing is ultra-critical, and it's too easy to lose a great shot if it's not set up perfectly. Yes, it's a different technique, but it's not for everyone. The competitors mostly have smaller sensors, and hence are easier to focus, at the expense of hyper-shallow depth of field. This is nothing much to do with the camera's output format but I think it is relevant to mention it here.

There's no explanation needed here: the Blackmagic Pocket Cinema Camera will cost $995 when it ships.

Some of the competing cameras (Eg. the Blackmagic 4K Production Camera and the Digital Bolex D16) sport a global shutter and that's a big deal for a lot of people.

Nobody knows how widespread and how widely used the Magic Lantern modifications will be. It's well worth taking a bit of a sanity check here and remembering that these RAW developments are about as pre-alpha as it's possible to get. They should be compared with Mankind's first steps on Mars, as opposed to arriving at Mars Terminal 1 in a commercial passenger spaceship. This is exploration in every sense of the word (including danger to the camera itself). And that's OK because it's fun and to many people it will be worth risking their warranty - even if only out of sheer curiosity.

Compare and contrast this with how Japanese companies develop software, which is by a long and meticulous process. It's meticulous, because Canon (or Sony, or Nikon, or JVC etc) cameras are never supposed to crash. They're software-driven hardware devices that are supposed to act like they're hewn from a solid piece of metal Crashes are out of the question and firmware updates are almost tested out of existence. The idea that Canon would sanction software that is written in such an ad-hoc way (absolutely no criticism of Magic Lantern intended!) is just inconceivable.

Will Canon write their own software to facilitate RAW video from their DSLRs?

From the existing range? I don't think so. In future products? I think somewhere between "possibly" and "likely". They might do this simply to add functionality to differentiate new products from existing ones. They might do this at the same time as they release more 4K-capable DSLRs.

So why is this the most important story of the year? It's because every camera sensor produces raw image data. Only time - and hard work from the likes of Magic Lantern - will tell us how many cameras, present and future, will become real, RAW-producing cinema cameras.

We're all guessing to some extent here. This is a very new development and nobody knows the answers yet. What do you think? Let us know in the comments.