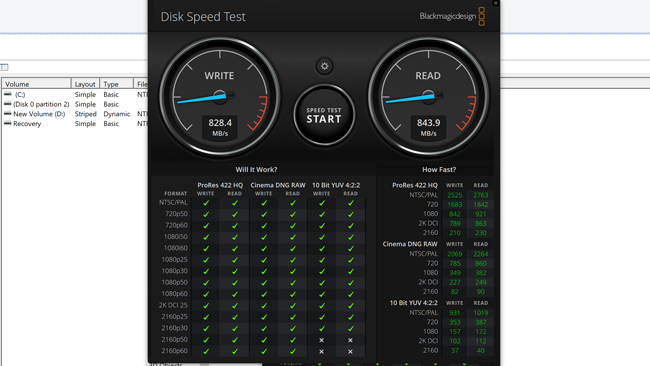 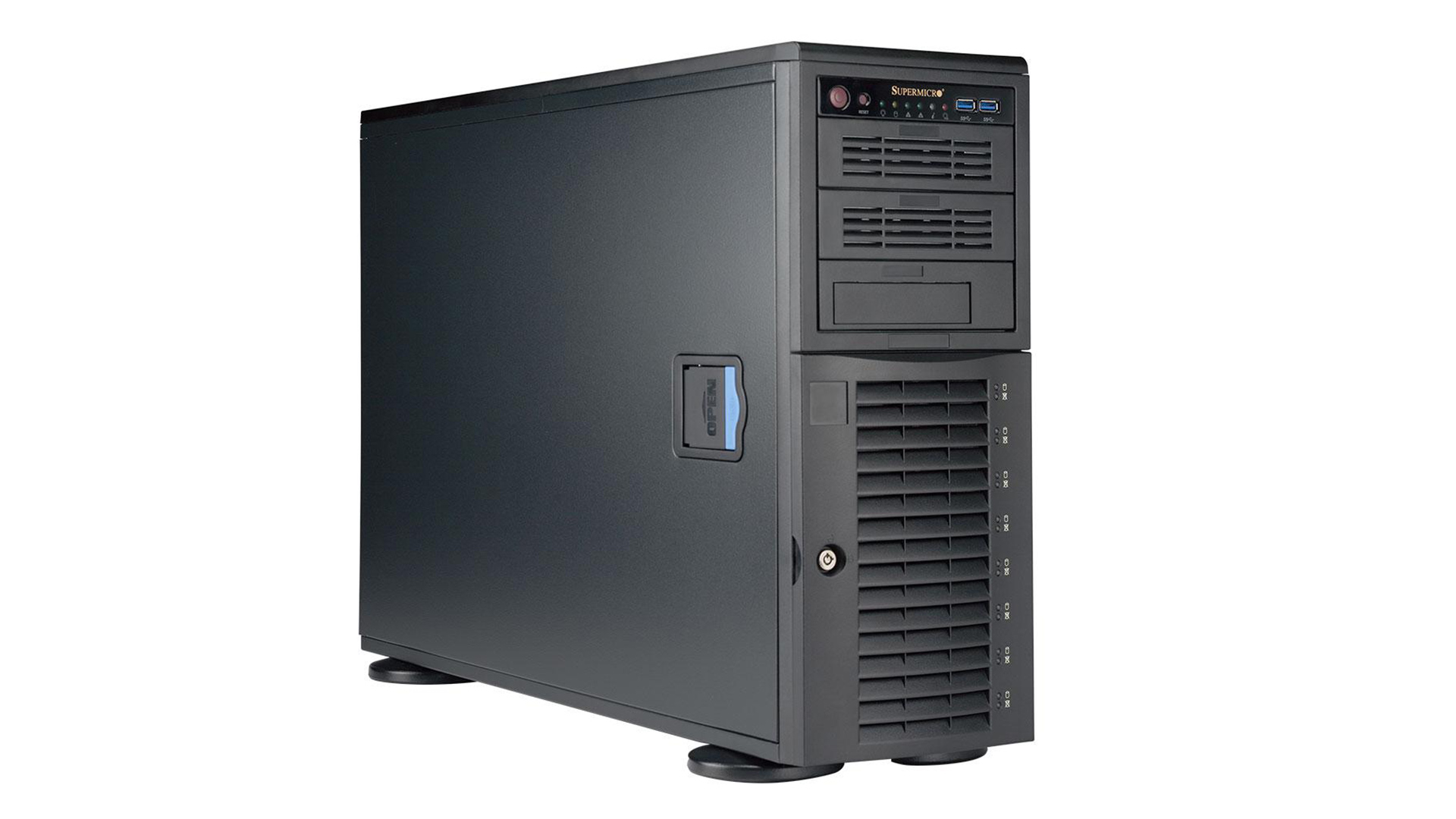 For the most computationally intense applications there is no substitute for a big, bad workstation, and the Supermicro 5049A-T, on paper at least, is a monster. Let's see how it measures up.

In a world of cloud computing and cellphones, it’s tempting to think that traditional workstations are a dying breed. Maybe one day, mobile internet will go at a gigabit per second, but even then, cloud computing applications still have to run on something, so the big iron will still need to exist. And in early 2020, if we want to finish things in high resolution, high dynamic range and high frame rates, the sheer heavy lifting involved means that a big, capable workstation is still the only way to fly.

The big, capable workstation I'm discussing here is the Supermicro 5049A-T, supplied for review in a configuration including Intel's Xeon Gold 5220 CPU, 64GB of RAM and an Nvidia RTX 2080 Super graphics card. It targets not only edit and colour, but also specialist work such as fluid simulations in 3D software which treat RAM as a sort of competitive eating challenge. The X11SPA-TF motherboard supports up to 3TB (yes, terabytes) of RAM, which might let the average water simulation create an actual ocean, as opposed to the small bucketful that’s possible on a more conventional configuration. 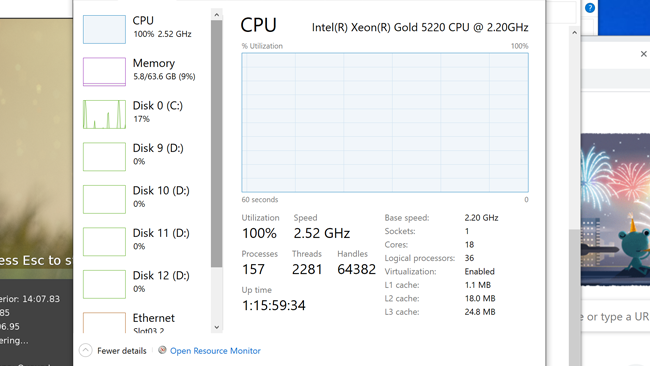 Blender's CPU benchmark shows good utilisation of the 18-core, 36-thread CPU, which has turbo'd up to about 2.5GHz under load

The Xeon Gold 5220 is an 18-core CPU with a generous 24.75MB of cache. One thing this gives us over lesser CPUs, other than the large core count, is more connectivity for PCIe devices. Modern CPUs communicate with PCIe cards using up to 16 channels – lanes – per card. Each CPU has only so many total lanes and more consumer-oriented options tend to have less than 32, which isn't great if you want to use two 16-lane graphics cards simultaneously. This CPU has a generous 48 PCIe lanes, meaning that we can avoid the compromise.

The operating system and software are stored on the now-normal, blindingly-fast M.2 SSD. For more sheer space, the case has eight SATA hot-swap bays at the front connected to the motherboard's onboard SATA controller. Seagate, via our friends at Scan, generously loaned eight of its vast 14TB IronWolf drives which slid easily into place and were configured in (approximately) RAID-10 using a combination of Storage Spaces to create four pairs and conventional disk management to stripe them together. 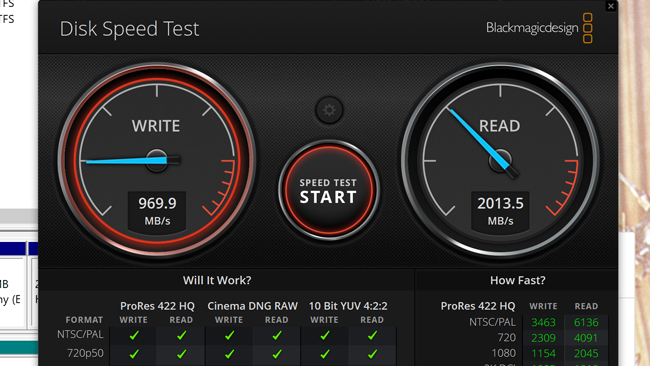 Yeah, that's a fast SSD. Purists might add another as private scratch space for software like Resolve

Panasonic also supplied its TX-55GZ1000B OLED OLED display. I’ll discuss that in more detail separately but it gives us an affordable HDR display option similar to the displays often used as client monitors in quite high-end circumstances. Blackmagic supplied both Resolve and a Decklink 4K Extreme 12G card, affording us 12-gigabit SDI and HDMI 2.1, which is required for HDR on the Panasonic display. There's a bit of setup to do with Resolve, the Panasonic display and Decklink board which I'll discuss in a separate piece, but overall, it’s a setup which makes a lot of sense for, say, the serious Resolve user.

Clearly, this is a high-performance workstation, not a low-cost one. Prices vary depending on configuration, but a similar setup of the basic workstation from Silicon Mechanics easily approaches US$6000. B&H list the Decklink 4K Extreme 12G at around $900 and the eight drives are $475 each, all plus tax. The system as reviewed is, therefore, pushing five figures, which isn't particularly surprising for a machine of this class. It’s not even the most expensive Xeon around; there are 24-core options too. 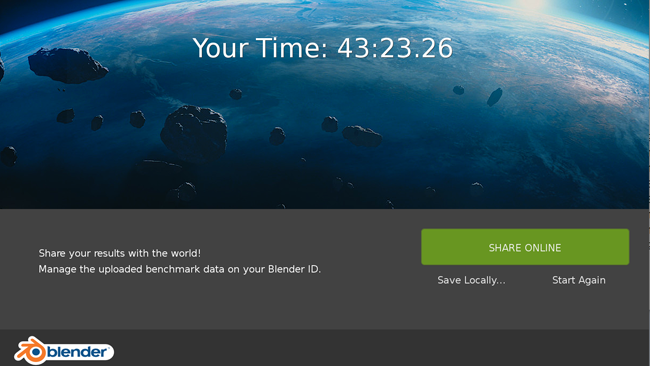 So, what do we get for our money? The CPU is not particularly fast simply in terms of its 2.2GHz clock speed. It has the ability to turbo up to 3.9, though this generally won't be possible across all the cores, at least not for long periods. Heavily multithreaded applications do best: 3D rendering software sings like an angelic chorus, although After Effects, with its notoriously lacklustre support for multithreaded working, might be a poorer fit. In something like Blender, it'll depend on exactly which renderer we're using. Turn the GPU on in the Cycles renderer, and suddenly it's more to do with Nvidia than Intel. It would, of course, be possible to add another RTX2080 for more GPU compute performance, depending on what the software supports.

Let’s look at some benchmarks. Blender’s test application, which was only announced in 2018, regrettably doesn’t seem to like RTX-series graphics cards (current installs of the main Blender app are based on newer code and are, to be clear, perfectly happy with Nvidia’s greatest). Still, in CPU mode, the Blender benchmark is a reasonably consistent measure of processor performance. The workstation rendered the “bmw27” scene in 175 seconds and the “classroom” scene in about 547, fully leveraging all 36 threads. For perspective, that’s faster in CPU mode than some benchmarks listed online using the GPU renderer. CPU-Z’s benchmark rates the system at 426.2 and 5783 on single and multiple cores respectively.

Not bad for onboard SATA connectivity

Puget’s Resolve 4K benchmark awards the system a score of 840, representing a combination of both CPU, GPU and storage performance (the 8K benchmark requires more GPU memory than the RTX 2080 has). Supermicro also supplied the machine with the 3DMark benchmarking application installed and, while it’s mainly aimed at realtime 3D rendering, it’s fun to watch. The workstation scored an extremely competent 11064, exceeding 92% of other results submitted. This is overwhelmingly a benchmark of the RTX 2080 and the remaining 8% will probably represent results from the 2080 Ti, which is about a third faster in many benchmarks. 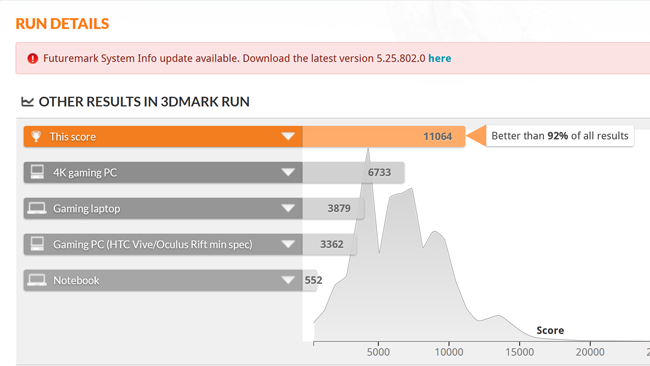 The SATA controller in Intel’s chipset seems very competent; Seagate’s disks exceed 820MB/second read and write on empty, just-formatted disks. These disks are probably capable of more on a controller with hardware RAID-10. The fact that the read and write speeds are quite symmetrical is probably down to the way Storage Spaces does its mirroring, which is not quite literally RAID-1 and may be costing us a small write performance benefit. Smaller disks might provide a keener price-space ratio, but a bit less than $4000 is keen for 50 formatted terabytes of fast, well-protected storage and it’s probably fast enough for even quite demanding 4K applications.

The market for big workstations is fairly rarefied and a place where very specific needs are addressed very specifically. That makes it hard to draw broad conclusions about value, especially as the Supermicro 5049A-T is available in a lot of configurations. A smaller number of faster cores might make sense for some and anyone interested in absolutely maximising horsepower for the money might also consider AMD’s Epyc range, which competes with Xeon and which Supermicro also supplies. Either way, the continued existence of machines like this goes to show that there will always, at some point, be a need for some heavy lifting and machines just like this to do it.