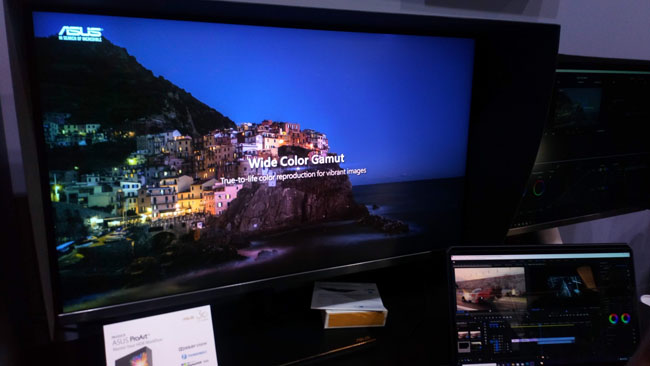 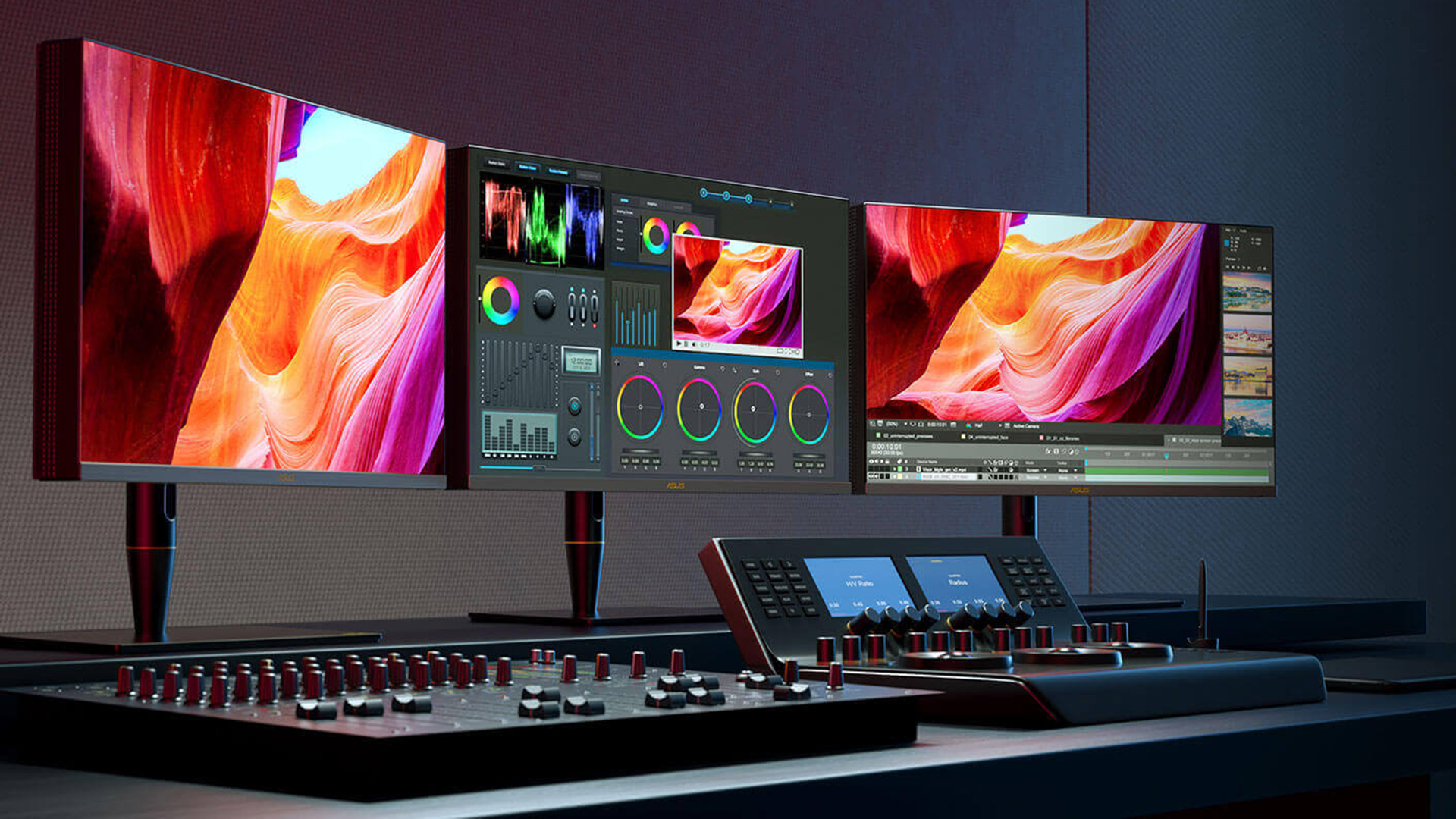 First look: The Asus PA32UCX has a lot of potential to revolutionise HDR colour grading at the all important low/mid-end of production. Phil Rhodes went along to Berlin to catch a first glimpse of what it might be capable of.

There’s understandably a lot of interest in Asus’s imminent HDR display, the PA32UCX. It was first spied, tucked away in an under-regarded spot way down the back of NAB’s south hall back in April, but despite the out-of-the-way location, it had already started to garner a bit of attention. Most people understood instinctively that it does not — and is not intended to — match the performance of a $30,000 reference display, but then again, very few things do. What’s more interesting is how it compares to things with a similar underlying technology, particularly the Canon we looked at recently and things with a similar intent which are almost all much, much pricier than the Asus display is likely to be. Asus talked in more depth about its current lineup in a press conference last week which preceded the IFA consumer electronics show in Berlin. 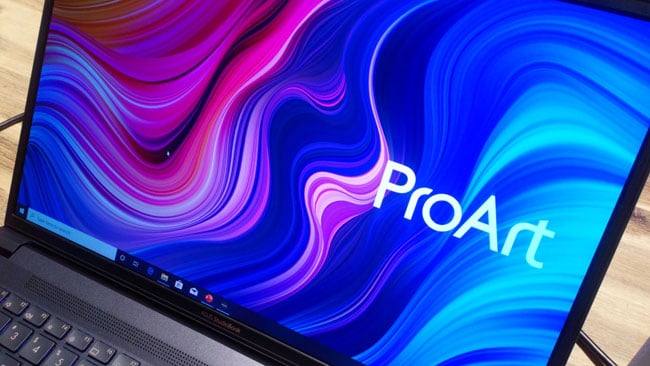 We don’t have a price for the PA32UCX yet, although an announcement should be imminent and a guess at “a few thousand” seems reasonable, based on the company’s other releases. Let's also be clear that all of this is based on a trade show floor examination – albeit in the rather more sheltered VIP area of Asus’s booth at the IFA show here in Berlin – and a completely objective assessment will have to wait until we have one on review, something that we’re promised as a priority. 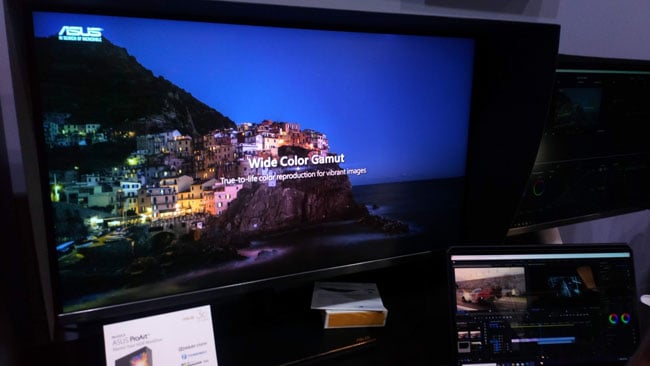 The known specifications are reasonably straightforward. It’s a 32-inch, 3840 by 2160 LCD display with 1152-zone backlight dimming. The backlight dimming provides for a healthy full-screen brightness of 1000 nits, with higher peaks possible over smaller areas. It supports 709, P3 and a promising 89% of 2020 (nothing will ever cover all of 2020, so it's a matter of degree). Given that, it’s probably fairly easy to cover 99+ percent of the more conventional gamuts. The key feature is, naturally, that backlight. On one hand, having 1152 zones sounds like a lot, though on the other hand, it’s only something like a 45 by 25 grid, assuming the zones are roughly square. Still, assuming those numbers are achieved, it’s something that will be very desirable to a lot of people.

There are a few choices of technological approach for HDR displays. There’s dual-layer LCD which is hugely capable but hugely expensive and can have strange problems when viewed off-axis. There’s high-output OLED which is more or less technology of the past due to its swingeing cost and alarming tendency to age. Finally, there’s zoned-backlight LCD which can create ghost images of often-squarish visible backlight zones around bright artefacts in the frame. The upsides of zoned backlights include near-ideal overall contrast ratio while minimising cost and not succumbing to the desaturated highlights of consumer HDR OLEDs, which tends to be the only other option in the price bracket.

How the PA32UCX compares to the best-zoned backlights out there remains to be seen, though watching a freeze-frame of exploding fireworks through cupped hands for a minute or so revealed no huge problem with ghosting. It’s there, of course, but no more than most technologically similar devices. This suggests that the underlying panel itself is pretty good, which is encouraging. Asus has done multi-zone backlights before, but often only with a handful of zones on displays which are really just intended to give games a bit of punch and don’t have much relevance to film and TV post production. 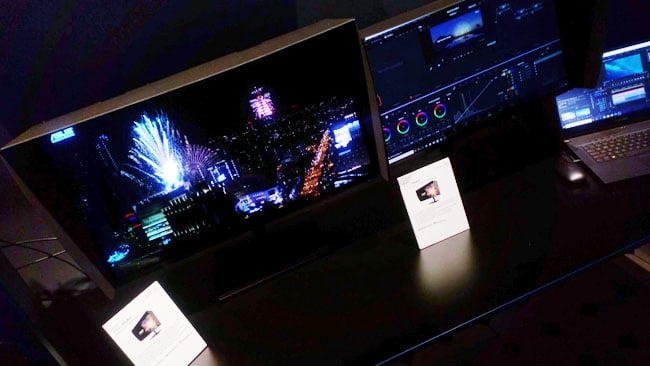 The sparks on fireworks like this are often a good way to visualise issues with backlight ghosting on zoned-backlight HDR displays, the PA32UCX performs at least reasonably

Some people might question why a company like Asus, which has been making PC components and other electronics for 30 years this year, suddenly develops an interest in the post production market. In some ways it feels like fairly natural evolution: Asus’ ProArt displays have competed for a while with things like HP’s Dreamcolor range for the eyeballs and wallets of the world’s professional photographers. Now, we live in a world where anyone who can afford a decent stills camera can also easily afford a decent video camera with high dynamic range log recordings, so it would make sense for the company to go for the HDR movie finishing scene as well. YouTube now supports HDR and few YouTube ingénues are likely to eBay for a BVM-HX310. YouTube creators are a much bigger market than the super high-end, though it’s possible that the high-end might cast an eye Asus’s way too, given the (almost inevitable) yawning chasm of a price differential between the PA32UCX and the next option up. 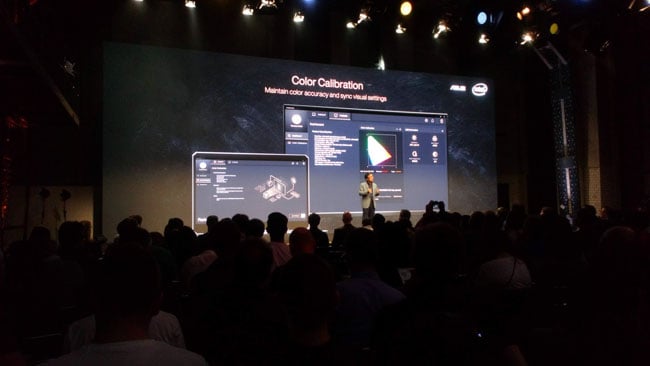 Some degree of colour calibration is built in

Apparently, the company leveraged the expertise of its laptop design people in creating the cooling system for the monitor and, while it’s chunkier than its more conventional siblings, it’s really only a couple of inches deep, which is good news for such a high brightness display. Many of them comprise a six-inch deep box full of roaring fans and while we can expect the PA32UCX to be aggressively cooled, it’s comparatively svelte for the spec. In the end, it will have been no easy task to create this thing and it’s a sign of Asus’s confidence in the market that it happened at all. 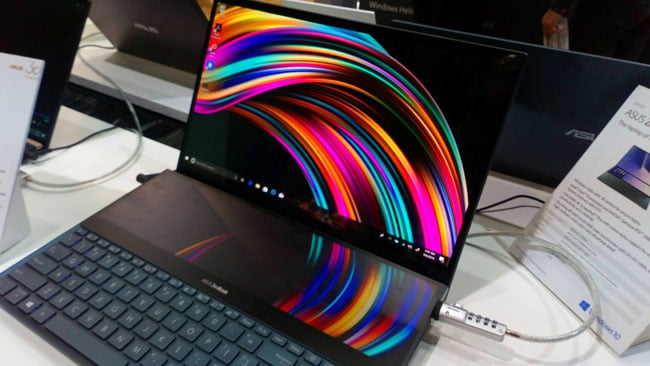 Strategically, two things are clear: going by the phone and laptop announcements made alongside the new display, Asus is continuing its laser-targeted grab for the high end of computer equipment, something that’ll bring the company into direct competition with a fairly well-established incumbent. In the film and TV world, the problem will be the Apple-centrism of companies like Pomfort, but Kyno is an increasingly plausible option for DIT work and perhaps one day we’ll see LiveGrade for Windows too. The laptops they announced, including several with an interesting dual display, are worth discussing in their own right — and perhaps a review. In the meantime, we’ll await an opportunity to examine the PA32UCX with keen anticipation.

Phil stayed in what was once East Berlin courtesy of Asus. Even though that part of the world is a more genial place than it was in the 80s, it’s still not enough to make him be nice about anything that wasn’t actually nice.