The future is here: Next generation of external recorder/monitors 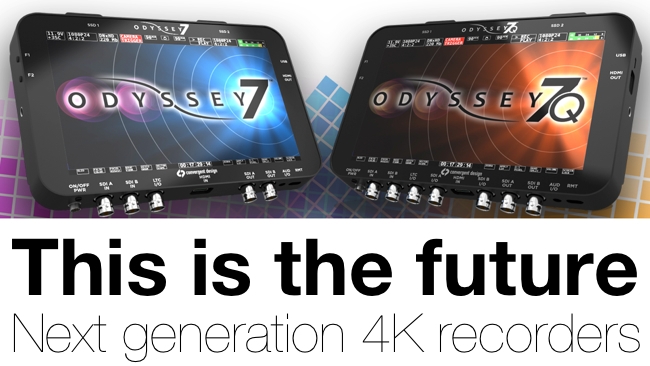 News has just come in of a significant and bold move in the External Recorder market. Until now, everyone's been wondering what the next step might be in this lucrative product space. Convergent designs, who came early to market with this type of product with the Nano Flash, have just announced a product that appears to advance the state of the art in several dimensions

First, it's a recorder-monitor, but the initial, basic configuration is as a monitor only. What this means is that it does have to be a good monitor, and the specs do indeed look pretty decent. It's a 7.7" OLED with 1280x800 pixels and a 3400:1 contrast ratio. The fact that it's OLED means that blacks will really look black.

But it can also be configured as a recorder. Essentially, it's a modular system that can be built for the job in hand. This modularity even goes as far as allowing you to license specific codecs for a day at a time if you want!

Up to 4 x SDI inputs

A more advanced model, the Odyssey 7Q adds the ability to monitor four streams in a quad-plot display 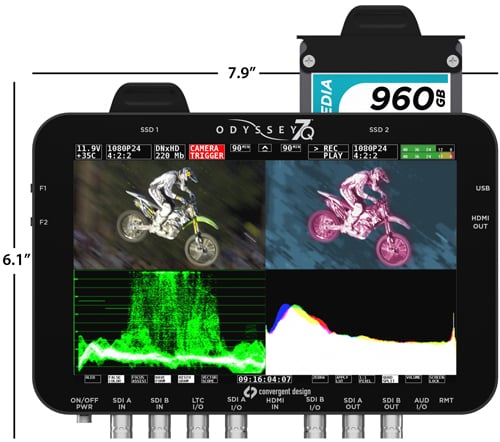 A fully-fledged OLED field monitor with focus assist and video analysis tools.
An SSD recorder that has SDI (up to quad on the 7Q) and HDMI, and which can record 4 streams at once or high speed up to 120 FPS.
The 7Q can record 4K.
Support for ARRI, Canon and Sony LUTS.
Price starts at $1295 for the monitor only.

We'll be talking to Convergent Designs at NAB and will bring you more details then but we can already see that this is a very significant product announcement. Just an SDI OLED monitor would normally cost more than this - although we'd imagine this could cost a lot more than the initial $1295 by the time all the options (and the speedy storage media) have been added.