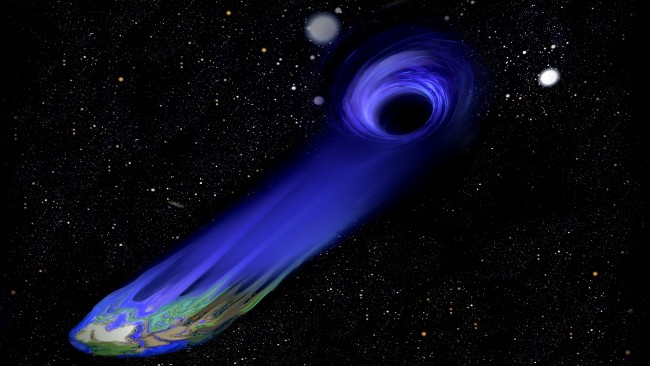 Hawking defied convention in so many ways. Diagnosed with a form of Motor Neurone disease at the age of 22, he was given two years to live by doctors.

For the majority of his life, he was unable to move more than a few muscles in his face, and yet he not only rose to the peak of the scientific community, but reached out to countless millions of non-scientists, inspiring them with a view of the universe that was stark, mysterious, and yet somehow hopeful.

Einstein developed the theory of Spacetime - a unified fabric of space and time that laid the ground for Hawking's theories around black holes, including "Hawking Radiation" - a characteristic of black holes where they  emit energy and eventually fade away, contrary to the conventional view that black holes can only absorb matter and energy.

Hawking was both an icon of the scientific community and one of its most energetic practitioners. Even in his later years, he was a communicator, with a popular Facebook account which he used to comment on current-day topics like Artificial Intelligence, which he considered a potential threat to mankind.

He also said that extra-terrestrial life, if it existed, would be unlikely to be friendly to the inhabitants of Earth, for the simple reason that any species advanced enough to travel through such a vast distance would probably regard humans as a lowly form of life. He said that if we received a signal from an alien civilization "we should be wary of answering back. Meeting an advanced civilization could be like Native Americans encountering Columbus. That didn't turn out so well."

Hawking was not only the subject of and contributor to TV and film - famously appearing in the Simpsons and Star Trek - but also gave the science fiction universe a language with which to explore topics like space and time travel, and of course, black holes.

The 2014 biopic The Theory of Everything followed Hawking, played by Oscar-winning Eddie Redmayne, through his early life as his meteoric rise  though the hallowed halls of Oxford and Cambridge university was modulated by his diagnosis.

The film portrayed Hawking as a deeply human individual, determined to experience life far beyond the restraints of his physical condition. It showed how his illness deteriorated to the point where he could only talk through a speech synthesizer, operated by the movement of a single muscle on his face in his latter years.

If it was awkward and frustrating for friends, family and visitors to have to wait for Hawking to string a sentence together  - it could take hours to speak a single paragraph - then you can only guess at the frustration of actually being Hawking, with so much to say, and such a painfully slow channel through which to say it.

The speech synthesizer became an icon in itself and was perhaps the first time a robotic synthetic voice came to be heard as the actual voice of a real person - so much so that even though speech synthesis has vastly improved over the last two decades, Hawking kept his original computer voice, because he felt that it was part of him and how he was seen by others.

There is almost nothing and no-one to compare Hawking with. If he were merely the greatest scientist of the century, then his life would have been remarkable. That he achieved all this while living on borrowed time, in a state of almost total paralysis, makes it all the more incredible. Sometimes so incredible that the only reassurance that it had actually happened was that he was still here, working daily as a university professor right up to his last days.

His biggest legacy is that he made it possible for ordinary people to talk about and to begin to understand concepts like black holes and the sheer scope and magnitude of the universe. Within the scientific community, he created the framework and the agenda for modern cosmology, and he continued to set the pace until the end.

He will be missed in ways that we may not even be aware of yet. In an age where, incredibly, science and scientists are dismissed in some quarters, he was an enduring backstop against anti-scientific nonsense. He wasn't the only great scientist alive in the last century - we're fortunate that there are some amazing minds still with us.

But you can't help feeling that he has gone at a time when we needed him most.