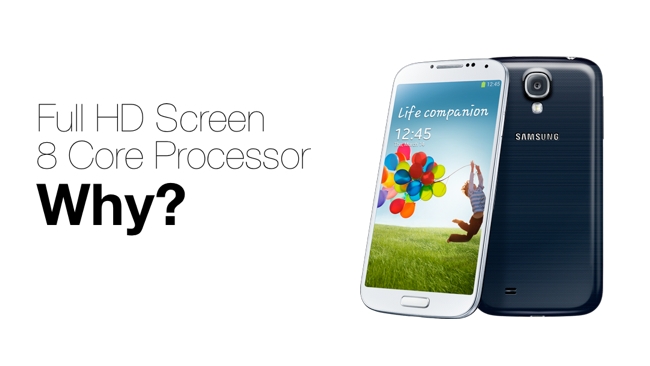 First, it's got a full HD screen. If you put four of these together in a rectangle you'd have something the around the size of an iPad, which would have 4K resolution. So we have to wonder why none of those 4K critics who say that 4K on a "mere" 55" screen doesn't make sense, think it's OK to have such a high pixel density on a phone that you hold in your hand.

Secondly, some variants of the S4 will have an 8-core processor. Just like a Mac Pro, although of course, obviously not in the same class.

The thing is that if you didn't have all that screen resolution, you wouldn't need all those cores to process the video. And the battery would last longer.

We love technological progress, but not necessary when it's not really adding anything useful.

Here's what Jan Dawson, Chief Telecom Analyst at industry-watchers Ovum had to say:

“As anticipated, the device features a slightly larger screen, an improved camera, and beefed up processor power and memory. The company also augmented various features previously available, including its eye-tracking capabilities.

“The Galaxy S 4 is a worthy successor to earlier members of this line, and will doubtless sell well. But it highlights a couple of the key challenges Samsung faces. Firstly, having innovated rapidly over the last several years to vaunt itself into top spot in the world smartphone rankings, Samsung now faces essentially the same challenge as Apple: how to continue to improve its devices year on year when existing phones are already top of their class, and there aren't obvious shortcomings? And secondly, how to set Samsung's devices apart from other devices that share the Android operating system that provides so much of the functionality? As rivals such as HTC and Sony up the specs of their devices and provide ever better hardware, it becomes more and more important for Samsung to differentiate on software and services.
“The improvements to eye tracking and the additions of S Translator and the hover feature and so on are good steps in this direction, but they can be seen as gimmicks rather than game changers. At this point, Samsung appears to be trying to kill the competition with sheer volume of new features – there should be something here for everyone, even if most of these new features won't be used by most users. For now, Samsung can likely rely on its vastly superior marketing budget and the relatively weak efforts of its competitors in software to keep it ahead. But competitors will catch up (as Samsung has caught up in many ways with Apple) and Samsung will need to continue to stretch. It also needs to build a stronger set of content offerings that cross its various platforms, so that it can extend its leadership in smartphones into the tablet space, and give consumers a reason to buy into an "all-Samsung" experience with their consumer electronics.
“Overall, there are lots of features, but based on past experience most people will never even find them on the device.”