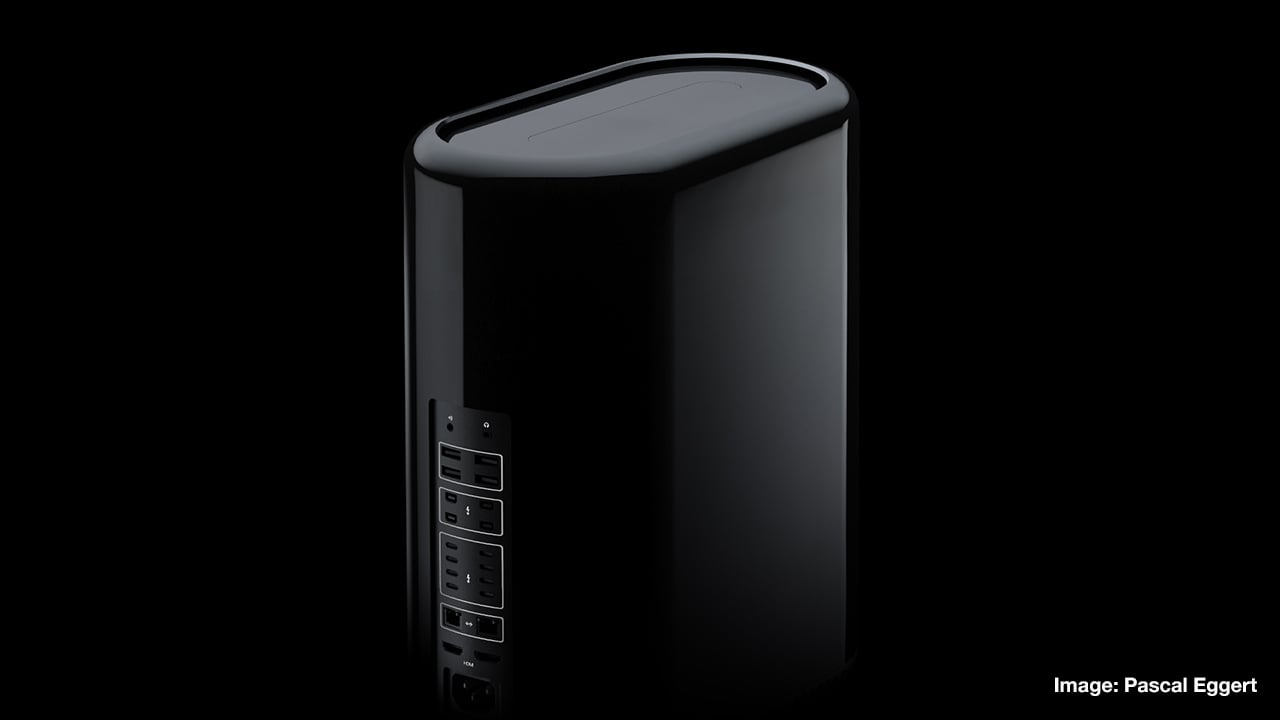 What form will the new Mac Pro 2 take?

A new Mac Pro has been the dream of Mac creatives for a long time now. We know it is coming, but what form will it take? K.Stewart blows the dust off his crystal ball and gives us his insights.

How can Apple follow the stunning iMac Pros? December’s roll-out of Apple’s iMac Pro line-up alongside an impressive (and free) FCPX upgrade is the first unalloyed good news for professionals in quite some time. A multitude of configurations, impressive performance, an innovative ARM co-processor, plus that stunning space grey finish... Even the pricing, which starts at £5k and scales up to over £13k, is competitive on a like-to-like basis with similar PC-based set-ups.

These first generation iMac Pro’s are an engineering tour de force that illustrates exactly what Apple can do with an ultra-thin chassis designed for consumers and laptop components.

But the next step is the one that will matter most: a next-generation Mac Pro with an all-new design for professional applications.

In terms of headline features, it seems inevitable that 8K will be a defining feature with support included in the December FCPX update. Every four years, the Olympics provide the broadcast industry with an opportunity to demo the most cutting-edge technology and the Tokyo Games in 2020 will feature 8K broadcasts thanks to a government-backed consortium including Sony. 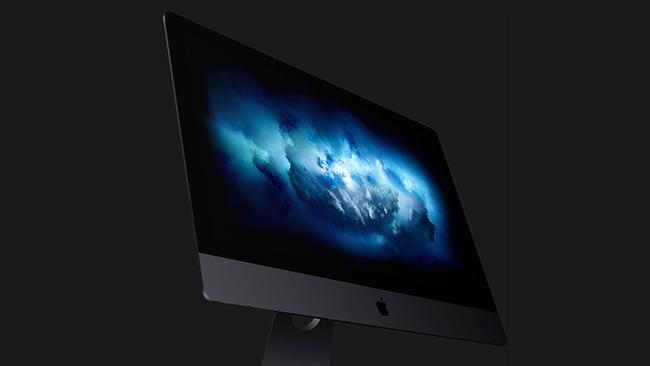 The backbone of a company then teetering on the edge of bankruptcy was creative professionals, a relationship dating back to Steve Jobs’ 1985 gamble on the LaserWriter, sparking the desktop publishing revolution.

By 2017, the Mac product grid was in obvious disarray and Apple’s relationship with professionals frayed to breaking point.

The boldly innovative Mac Pro desktop hadn’t seen a significant update since launch, while the refresh of the MacBook Pro line-up in 2016 proved spectacularly divisive.

As was to be expected, the refresh had a slimmed down chassis size and dropped ports. However, the OLED Touch Bar drove up pricing while failing to deliver a killer benefit – particularly for professionals who often use external keyboards. The new low-travel keyboard didn’t help either, with many disliking the feel and even more so its expensive fragility.

Perhaps the most infuriating of all was a 16GB max RAM limit. This wasn’t Apple being ignorant of high-end application requirements. The Intel Kaby Lake CPU’s only supported 16GB with the high-speed, low-voltage RAM used in the MacBooks. That limitation might have been more bearable if there’d still been a 17-inch MacBook that could take different RAM or if the Mac Pro had been updated recently.

Apple loyalists have seen the company through some lean times, but it now being the richest corporation on Earth building a stunning new Cupertino campus and talking up the future of iOS as a PC replacement, it seemed like the end of the line for professionals and Mac. 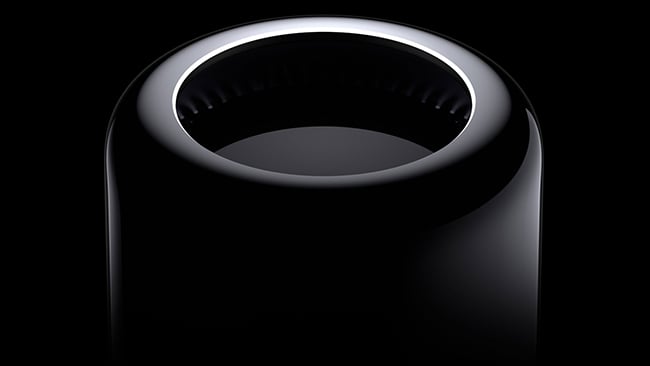 The 2013 Mac Pro split creatives. But what form will its replacement take?

So in April 2017, Apple invited journalists to Cupertino for a rare mea culpa and a promise to re-energise the professional desktop line-up with an iMac Pro by the end of the year and an all-new Mac Pro to follow.

Equally important, the company acknowledged the lack of communication that has so undermined faith in its pro line-up. Secrecy adds excitement to consumer reveals, but in the professional and corporate space, where peoples livelihoods are at stake, it’s anathema. The disastrous handling of Final Cut 7 Pro’s discontinuation still overshadows FCPX to this day.

Pivotal to the meeting with journalists was a belated explanation of what had gone wrong with the 2013 Mac Pro.

The thermal core of the Mac Pro consists of a triangle of parts, with the CPU matched against two graphics cards, all arranged around a large cooling fan, which achieves near-silent operation.

It would eventually become apparent that this was a losing gamble.

While CPU performance hasn’t improved as fast as Apple hoped, high-end applications that need intensive computational resources have increasingly turned to ever bigger and more powerful GPUs. Many VR and high-end cinematography applications, for example, can scale well across a single big GPU but not so much multiple devices. And the longer the Mac Pro went without upgrades, the less likely that any third party software maker would optimise for it.

The only way forward for Apple was to start from scratch.

I/O isn’t usually the most exciting of subjects, but Apple has a long history of innovating in this area and January 2018 saw Intel launch Titan Ridge – a new Thunderbolt 3 chipset that supports a pair of DisplayPort 1.4 singles on a single connection. This opens the door to an 8K display running at 30Hz uncompressed or twice that with Display Stream Compression. Moreover, 2018 is the year that Intel will reduce licensing restrictions on Thunderbolt 3 and make the protocol royalty free. As Apple co-developed Thunderbolt with Intel, it’s difficult to imagine the Mac Pro being anything other than a Thunderbolt 3 showcase.

Apple formally exited the standalone display business in 2016, but it was actually 2011 when the company last updated its once formidable Thunderbolt Display line-up. LG’s UltraFine5K Display with Thunderbolt 3 stepped into the gap with some glitches along the way, but Apple will re-enter the market with the Mac Pro.

While there’s no indication of its specifications as yet, 2016 saw Dell launch an 8K 32-inch monitor with as many pixels as four 4K displays and a $5K price tag. It also requires DisplayPort 1.4 which brings us back to I/O while suggesting a pretty good starting point for what to expect from Apple.

A touch interface is obviously a non-starter, but an integrated iSight camera with Face ID support? If iPhone X’s Face ID is the genesis of gesture-based UI for Apple, a flagship dev machine would seem a very good idea.

The MacPro is available with a stylish space grey mouse, trackpad and keyboard, but no Touch Bar. One theory is that existing Touch Bar devices integrate TouchID which is now giving way to FaceID, so it made sense to wait.

It’s fair to say Touch Bar has yet to find a killer app, but it’s hard to think of a better opportunity for it to shine than in partnership with the Mac Pro. NLE applications have a long history of customised interfaces, so Touch Bar V2 with a bigger display area for timeline manipulation could be a killer feature to redeem the concept.

The 1999 Power Macintosh G3 (Blue and White) mounted its logic board on a folding door that swung open for tool-free access to all the main internal components. It could be opened while still running and up to four hard drives could be fitted internally. That easily upgradeable design served professionals so well, it would be maintained and refined through 12 years, including the switch to Intel CPUs in 2006, until WWDC 2013 and the reveal of the radical cylindrical redesign that offered twice the performance of the previous model in a form factor one-eighth of its size. A single bar held the GPU cards in place allowing for tool-free replacement, while six Thunderbolt 2 ports supported up to 36 Thunderbolt devices.

It’s obvious that the new Mac Pro will ditch the Mac Pro thermal core design. The paired GPU concept hasn’t worked out, so the new modular design needs to be able to accommodate a more conventional approach for both Apple and customers to swap out the supplied CPU/GPU for upgraded models.

However, we can’t see Apple ditching its commitment to ultra-quiet operation and the easy portability of the Mac Pro could remain a design goal, while Thunderbolt 3 yet again ramps up the potential of external peripherals. The emphasis on modularity could suggest a core device that uses Thunderbolt 3 to add capability such as RAID arrays from Apple or partners in themed chassis designs.

A relatively slim-line core chassis that allows for more flexibility in CPU/GPU upgrades, plus high-speed I/O could yet work, but only if the reveal encompasses partners that have auxiliary devices ready to go. The defining failure of Mac Pro 6 was its failure to spark a winning ecosystem. Professionals who got burnt first time around won’t take on faith promises of supporting hardware. In theory, the modularity of a Mac Pro could allow for an entry-level replacement of the Mac Mini – another product long lacking an upgrade about which Apple declined, but this seems as unlikely as Craig Federighi’s joke about an octagon-shaped Mac Pro.

Apple has taken great strides with its ARM-based iOS processors, but there’s zero chance of them being at the heart of the MacPro. We expect Apple to build upon the coprocessor approach in the iMac Pros, but legacy pro applications dictate x86 and Intel. Cascade Lake is set for 2018, while Cannonlake Xeon is set for 2019. AMD’s next-generation Ryzen CPU will be considered, but thus far Intel has been the go-to choice for Apple and it’ll be a surprise if that changes.

The 2013 Mac Pro came with dual AMD FirePro workstation-class GPUs and, despite some issues, Apple kept faith with the company for the iMac Pros with the Radeon RX Vega range. If Apple is going to achieve a faster, quicker upgrade cycle, then keeping to the same family as the iMac Pro could yield benefits. GDDR6 and HBM2 advances announced in the past few weeks will help drive significant GPU refreshes soon.

In April 2017, Apple was clear that it would take ‘more than a year’ to create something great for their professional customers. So as a best-case scenario, we could be looking at a re-run of the iMac Pro schedules with a reveal at WWDC in June and first shipments in December. In fact, just the same as the 2013 Mac Pro. WWDC is the perfect venue for a pro reveal.

That said, the iMac Pro’s give no sense of being in any way compromised in price or performance to leave space for an imminent Mac Pro. Even if engineering a class-leading modular design from a clean sheet of paper were easy, which it obviously isn’t, there’s the ecosystem question. CPU/GPU choices made now require a roadmap from partners able to commit to the long term. The performance of the machine should be matched by peripheral devices ready from day one. Applications that show off its potential need to be ready to demo, third-party as well as Apple, plus there’s that pro display.

We hope for a reveal at WWDC18 reveal and December launch, but wouldn’t be surprised if WWDC serves as more of a teaser for something that might not arrive until 2019.