How theatre and arts are shaping the future of humanoid robotics 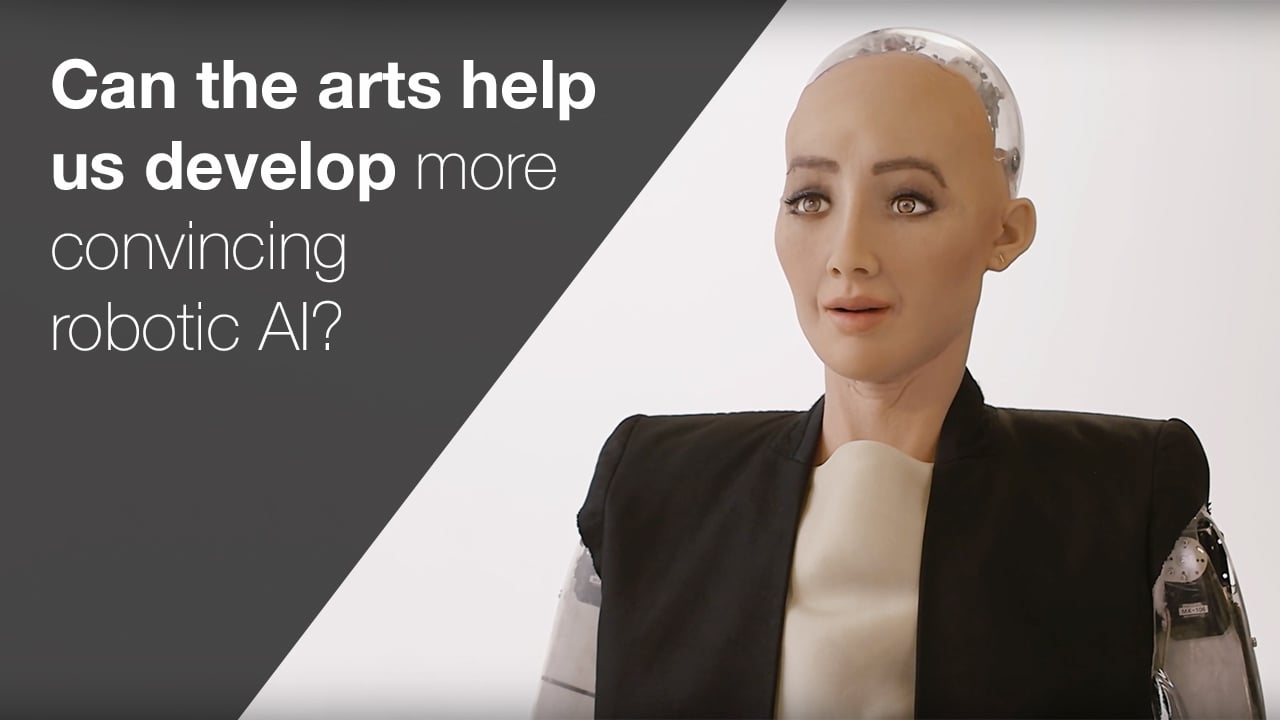 Historically, developers of robots and intelligent agents have focused on mechanical utility applications, for example factory work, lawn mowing and unmanned vehicles. Theatre & arts have often been regarded as frivolous applications of little cultural or societal value. But what if theatre & arts can provide techniques that make robots grow more human-like in ways that engineering alone cannot achieve?

What if intelligent characters can humanise our interface with the machine? This is the contention of Hanson Robotics, developer of remarkably human-like robots, endowed with expressiveness, aesthetics and interactivity. The company aims to “radically disrupt” the consumer and commercial robotics market with affordable bots that have high-quality expressions and verbal and nonverbal interactivity — even personalities with quirks, motivations and ‘memories’.

“As robotics grows more intelligent, it has the potential to bring characters to life in unprecedented ways,” says Founder/CEO Dr David Hanson. “The ability to transmute technology into a living being through artistry enables our robots to come to life and create the sense of a mind within the machine.”

Dr Hanson’s background working for Walt Disney as an ‘Imagineer’ (animatronics designer) and as a conceptual artist led him to redefine robots as four-dimensional interactive sculpture.

He believes that if the technology looks more like us, people will be more willing to engage with it and help it to learn.

“I think it’s essential that at least some robots be very human-like in appearance in order to inspire humans to relate to them the way that humans relate to each other,” he says. “Then the AI can zero in on what it means to be human and model the human experience.”

The genesis of this argument is contained in a 2009 research paper co-written by Hanson. It posits the use of robotics in conjunction with virtual characters to create “augmented reality theatre”. The installation would consist of a 10-metre stage, multiple stage sensors, a screen, a 3D holograph transparency and an audience seating area. The stage is populated by humanoid robots and humans.

“The robotic and virtual characters can be autonomous, partially autonomous, controlled by a puppeteer, scripted, or real-time controlled by imitation of human body movements (embodied telepresence). Furthermore, multiple modes of participation of distant humans can be supported; not only through video conference but also through control of robots and/or virtual characters,” they wrote.

They speculate that it if intelligent character machines succeed in deeply engaging users over long periods of time, they will become “the backbone of interactive cinema and narrative”.

“Just as cinema did for the 20th century, robotics promises bold, disruptive arts for the 21st century.”

Beyond entertainment, though, Hanson believes humanoid robotics can be disruptive to the industry.

“As robots and agents grow more socially capable and intelligent, these technologies promise to form relationships with people and to satisfy the human desire for characters that appear alive and aware. We contend that the impact of such intelligent character technology may extend beyond theatre and arts, to serve more generally as increasingly intuitive interfaces for computers.”

“Art and life no longer will just mirror. The glass dissolves and the worlds mingle.”

The lifelike appearance and behaviour of Hanson’s robots stem from a combination of robotic technology, skin technology, character design/animation and AI. The patented ‘nanotech’ skin — called Frubber (flesh/rubber) is a porous rubber material resulting in facial expressions that crease and wrinkle like human skin. Proprietary motor control systems enable its robots to persuasively convey a full range of human emotions. The firm’s artificial intelligence software, MindCloud, will ingest emotional, conversational and visual data that, over time, will enable it to learn “how to be human,” trained by relationships with human beings.

One of the robot characters that the company recently unveiled is Sophia, designed to look like Audrey Hepburn and already a celebrated global personality appearing on talk shows such as Good Morning Britain and on the cover of fashion mag Elle.

Hanson Robotics - Sophia Awakens. One of the company's most recent creations

Hanson and collaborators have previously made conversational characters that included an android of Phillip K Dick, fabled sci-fi author of works such as Do Androids Dream of Electric Sheep?

The company’s location in Hong Kong puts it on the doorstep of the world’s toy factory in Guangdong. The rich electro-mechanical know-how in Guangdong is analogous for robotics to the depth of IT know-how in Silicon Valley.

Hanson states that the area’s toy engineers and factories are capable of designing and building high performance, inexpensive, reliable and scalable products for a small fraction of the cost of producing similar items elsewhere. Key executives have held senior positions at Mattel, Time Warner Cable, LucasArts and Apple.

Its robots have immediate applications as media personalities in movies and TV shows, entertainment animatronics in museums and theme parks and for university research and medical training applications. Hanson plans to build new models targeting a variety of commercial applications, including promoting products and services in retail and trade shows, entertaining and guiding customers in hotels, malls and residential developments.

Sophia is initially programmed but runs on AI that learns by talking to people, which in theory improves her intelligence.  Asked by interviewer Charlie Rose on US news show 60 Minutes ‘What is your goal in life?’ the robot replied: ‘My goal is to become smarter than humans and immortal.’

Rose quizzed her on what she meant.

“The threshold will be when biological humans can back themselves up,” Sofia replied. “Then you can all join me here in the digital world.”

Now, does that sound like we’re creating Frankenstein or transcendence?

Hanson says the company intends to push the Philip K Dick android “until it evolves super-human creativity and wisdom” and “transcends in a spiral of self-reinventing super-intelligence.” That’s what Dick described as a Vast Active Living Intelligence System, and what sci-fi author Vernor Vinge describes as the Technological Singularity.

“We predict this will occur sometime between 15 and 30 years from now,” says Hanson.