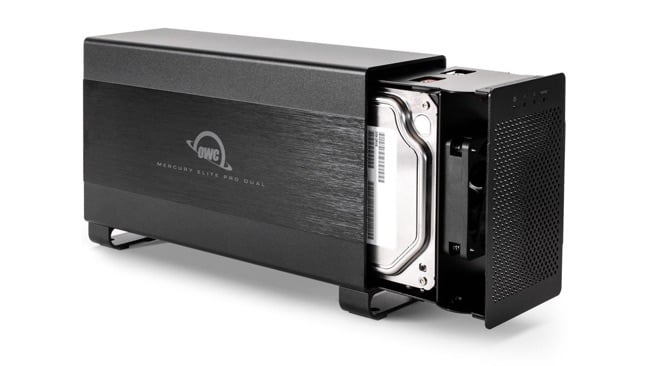 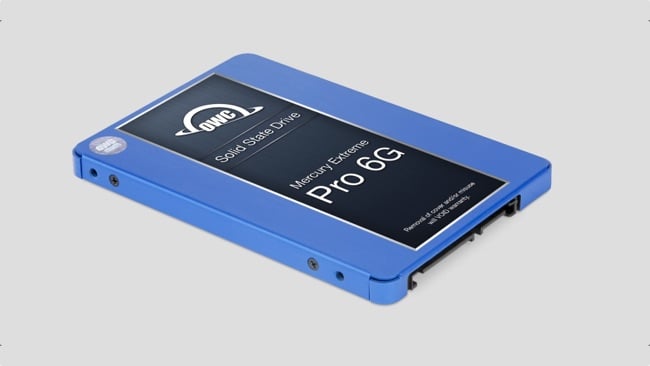 I tested a 480GB OWC Mercury Extreme Pro 6G SSD with an Atomos Shogun Flame. The Mercury Extreme Pro 6G has been certified for use in Blackmagic Design equipment and has a maximum read speed of 559MB/s and write speed of 527MB/s. My own tests revealed slightly lower, although pretty impressive figures. OWC also sent me a Mercury Elite Pro Dual, which, if you’d buy the empty one, you could install the SSDs into.

For video production, the OWC Mercury Extreme Pro 6G SSD seems like a winner. These SSDs are certified not only by Blackmagic Design but also by Video Devices, Sound Devices and Atomos. On the Atomos website, the 480GB model is rated for up to 4K/30p and HD 120p video.

Video recording performance was excellent. The SSD never got hot and there were no problems at 4K or at any of the lower resolution recordings at higher numbers of frames per second. A nice addition that comes in the box with the SSD is a full surface plastic adapter plate. Other SSDs come with a frame, but that doesn’t prevent your Atomos Master Caddy denting when you press on its top surface.

OWC also sent me their basic RAID solution, the OWC Mercury Elite Pro Dual. This nicely designed black box features two Thunderbolt 2 ports, one USB 3.1 Gen. 1 port and all of the cables you need to start using it immediately. You can set the small-footprint unit to RAID 0, RAID 1, disk spanning and JBOD modes. You can buy it as a bare enclosure or with disks already installed. I got the chance to test the 2TB version.

The Mercury Elite Pro Dual is OWC’s simplest Thunderbolt 2 RAID device. It has room for only two disks inside — my test unit came with two 1TB Toshiba drives installed — and no ON/OFF switch. To start the unit, you simply plug in the Thunderbolt or USB 3.1 cable and it starts up.

The Mercury Elite Pro Dual has been rated for a maximum throughput of 474 MB/s. My test unit achieved lower figures in RAID 0, but as I currently don’t have a Thunderbolt 3 machine at my disposal, I couldn’t test the unit at its highest performance — I didn’t get higher figures than 300MB/sec, which still is very decent.

The pre-installed Mercury Elite Pro Dual units can have up to 20TB of storage, which is enormous given that there are only two disks to install. The unit has been designed to automatically spin down during periods of inactivity and to power on and off with your Mac, but the single fan at the front of the unit was a little too loud to my liking.

Still, the Mercury Elite Pro Dual is a great backup device. I’ve been using it now for a few days via USB 3 as a Carbon Copy Cloner destination and it works brilliantly. The drive only needs to be powered on for half an hour or so. I can also see me using it as an instant backup device when shooting video on location — whenever there’s a mains power outlet available.

Away from the noise issue, the quality of build, the design and disk drives that are installed are all of a high quality. Its price is very decent as well: my test unit costs $397