The real purpose of the RED Hydrogen smartphone 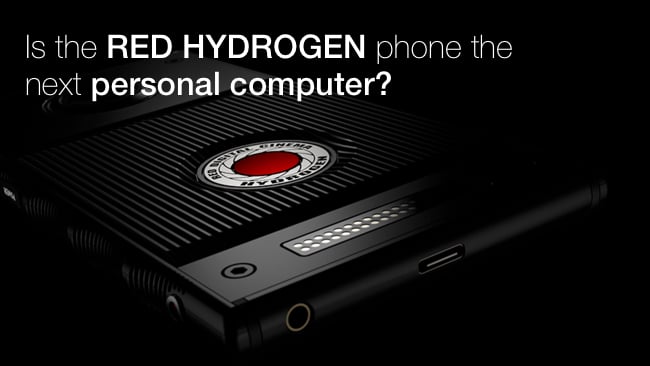 Is the RED Hydrogen the new PC?

RED's Hydrogen is not just a smartphone or even primarily a phone at all. And that's the key to understanding its potential: this could be a whole new mobile computing platform with an unprecedented degree of flexibility and expansion.

While we’re still all scrabbling around trying to understand RED’s Hydrogen One phone with the scraps of information we have so far, we should perhaps not be too distracted by the idea that you can make calls with it.

First of all, this is more than a phone. The big questions is: how much more. The answer, I suspect, is an awful lot.

You almost don’t have to reference the RED device at all to realise that virtually every phone today is much more than a phone.

Broadcast to the world from a phone

Who would ever have thought that a phone would have a Full HD display (like the current iPhone 7 plus) or much more, like the 4K Sony. Who would have thought that you would be able to broadcast HD video to the entire world from a battery powered device in your pocket or bag. It’s so simple: point it at something and press “Go Live” on Facebook.

This isn’t just about teens unboxing their latest purchase from Amazon and showing it to their friends; it’s changing the world. Governments know that protests and political meetings can be shown live, by anyone.

And who would have thought that the telephone in your hand could be as powerful a computer as a laptop.

While advances in desktop and laptop computers have tailed off in recent years, mobile technology has forged ahead. Multicore Xeons might still have the edge in workstations, but for everyday use, there’s nothing that a phone connected to a Bluetooth keyboard and a decent external display can’t do.

Except, why would you do that? Users and phones themselves are adapting to ways of working that in many ways surpass the laptop paradigm. Voice recognition and AI will see phones surpass and supplant laptops for almost everything.

And that’s before we talk about connectivity.

The most connected devices

Phones are the most connected devices ever made. My first experience with phone connectivity was putting a standard telephone headset into an acoustic coupler and downloading software at a glacial pace while paying £1 per minute for a transatlantic line. Today’s phones have 4G (soon to be 5G): connections that are as fast - if not faster - than broadband. When my local fibre connection goes down, I just tether my house to my phone, and barely notice the difference. (I realise I’m lucky enough to have fibre in my street and have line-of-sight with a 4G mast - but it shows it can be done).

To understand the Hydrogen One (based on the little we know about it) you have to focus on the idea that it’s modular. That makes it a platform. There’s that word again. You hear it all the time, but it’s worth spending some time here making sure we’re all on the same page with this, because platforms are good; very good.

A computing platform is a system that is expandable in software or hardware or most likely both. Smartphones are platforms. Platforms support apps, and apps support virtually any functionality that is within the capabilities of the overall system. The diversity in apps is astonishing. Everything from jokey games to heart monitors.

The limit to the phone/app ecosystem is the power, the features and ultimately the form factor of the phone. The CPU/GPU and battery life will also constrain the ambitions of the device.
But that’s until the Hydrogen One came along. The new RED phone has something that no other phone manufacturer has implemented and marketed successfully: a high-speed expansion bus.

A new bus is coming

With this one feature, the Hydrogen One is differentiated from every other phone on sale. We don’t know yet how this is going to work but the potential is enormous. For the first time, you will be able to hold in your hand a phone that has the same potential to change the world as the IBM PC.

If you can remember that far back, the IBM PC was an unremarkable computer in many ways. It wasn’t particularly powerful, and in its basic form it didn’t do very much. But the very fact that it had a basic version means that it was highly upgradable. It had slots for expansion cards - almost the hardware equivalent of apps! And it ran an operating system, MS-DOS, that was soon to become a world standard.

Some of the first digital audio workstations were based around the PC standard. The CPUs at the time were completely unable to process even audio (never mind video) in real time. And yet at one point I had a sixteen track digital audio workstation and sampling system sitting on my dining room table, powered by a feeble 80386 CPU running at a blazing 20 megahertz. How was this possible? Because I was able to plug expansion cards into the PC that had capabilities way beyond the native power of the ‘386 chip. One had dedicated DSP chips. Another had a hardware sampling system. A third one was a fast (for those days) disk interface so that I could use speedy external drives. The internal bus was barely fast enough for one channel of digital audio so the system had its own bus, in the physical form of a ribbon cable that ran across the top of the expansion cards. This bus ran at 256 times the audio sample rate and meant that I could make up to 256 internal connections between the “virtual” devices in the DAW.

It all worked so unbelievably well that high-end post production studios bought them to post complex audio tracks alongside movies. If you want to hear an example, just watch Aardman’s “The Wrong Trousers”, featuring Wallace and Gromit. This animated classic used 80 tracks of audio (although the system was only capable of playing 16 in real time, there was no reason why audio shouldn’t be distributed across many more “virtual” tracks).

PCs are still around, with vastly more storage, RAM and CPU power. GPUs have kept up the pace as Moore’s Law begins to fade, defeated by thermal runaway as chip components become ever smaller.

Let’s not get distracted here. The PC is a great example of how even a modest platform can become something that is very much more than the sum of its parts. But it’s had its time. Mobile computing is the de facto platform of choice now, and this, I think is where RED is looking with Hydrogen.

What has RED actually said?

Look at this paragraph from RED's original announcement:

HYDROGEN ONE is the foundation of a future multi-dimensional media system. The HYDROGEN SYSTEM incorporates a new high-speed data bus to enable a comprehensive and ever-expanding modular component system which will include future attachments for shooting higher quality motion and still images as well as HYDROGEN format holographic images.

It’s not always a good idea to analyse marketing prose too deeply. It’s not an engineering document. But, working on the assumption that each nugget of information is at least minimally the case, then this is what we can conclude.

HYDROGEN ONE is the foundation of a future multi-dimensional media system.

This, more than anything, says “platform” to me. Every platform needs a foundation: a minimum viable product that can act as the base starting point for much more. A mobile computing platform has to be mobile, and, currently, there is no form factor that is more suitable, more evolved and more widely understood than a smartphone. So while it is certainly surprising that a camera company should release a smartphone if you look at it out of context, it is at least arguable, if not highly likely, that any effort to create a modular mobile platform will have a smartphone at its centre.

"Multi-dimensional media system” is a clever phrase. Because the display, which we haven’t talked about yet, is a multi-dimensional display. And of course, the modular platform is - topologically - multi-dimensional too. “System” is a term that has a special meaning in photography and filmmaking, where it means a coordinated collection of parts (cameras, lens mounts and lenses) that work together with no incompatibilities.

This is where the system’s biggest potential is hinted at. What’s the high-speed data bus? Is it a brand new bus? Is it an existing protocol like Thunderbolt with a new form factor? Is it fibre?

We have no idea.

Whatever it is, it’s not going to use conventional connectors, and it will have to be fast. A good high-speed bus allows peripherals to truly become part of the system. This is beyond intriguing.

I’m not going to speculate about what the modules might be, beyond the obvious: that there will be camera options. And of course, we’re told that the Hydrogen will integrate with existing RED systems.

Beyond that, there’s the prospect of third parties, of which, if the platform’s a success, there will be many: since the introduction of the DSMC 2 system from RED, third party products have become an essential part of the ecosystem.

We haven’t talked much about the “holographic” display here. That’s simply because we don’t know enough about it. It’s possible that RED is introducing essentially two giant leaps for smartphone technology here. There’s the modular phone system, and there’s the “holographic” display. I’m guessing that the display will need a very capable data pathway to supply it with all that visual data.

It might be that this was simply an opportunity to introduce two important, but essentially separate, technologies in the form factor of a smartphone. What’s equally likely is that the two are interlinked: where one depends on the other to some extent.

Finally, in case you’re thinking that a smartphone CPU and GPU aren’t enough for doing the heavy lifting of computational photography and other heavy duty media processing tasks, then this, again, is where the modularity comes in. (We’re not saying that the Hydrogen One has any kind of facility like the multi-lensed Light L16 or the Lightfield-based Lytro cameras but computational photography is a new paradigm that is moving quickly towards us over the horizon).

If the “high-speed data bus” gives low-level access to memory and processor I/O, then it seems likely that at least one module could add to or even completely supplant the original processing in the system. This means that there would effectively be no limits to the ultimate power of the modular device.

You can see why this is getting exciting, even it if is still based entirely on speculation.