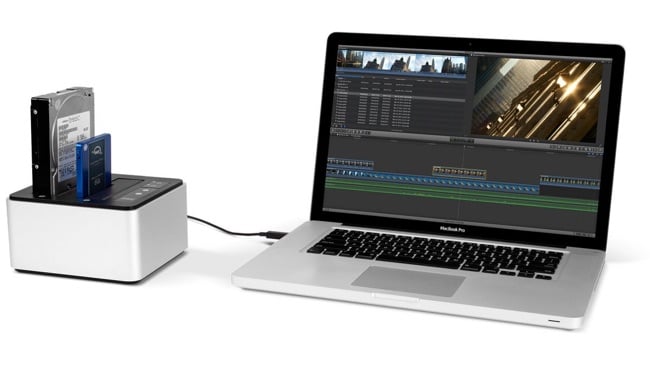 Discreet it's not, powerful it is: the OWC Drive Dock

RedShark Review: Want to use bare SATA drives with your Mac? OWC might well have the answer in a sturdy and ergonomic package that also happens to be built like a tank.

Mac users roughly have two options if they want to use bare SATA drives: a Wiebetech (now: CRU) Ultradock USB 3 Gen. 1 device or a Thunderbolt dock. If the latter is opted for, there’s either the RocketStor 5212 with one Gen. 1 Thunderbolt port, or the Thunderbolt 2 OWC Drive Dock.

The appeal of a bare drive dock is that you can hot swap and read two disks simultaneously. I personally have been using a RocketStor for about a year now to boot from a bare SanDisk SSD, squeezing out the last bit of performance of my iMac mid-2011. The RocketStor does the job, but it’s a not so nicely designed (white — would you believe it?) plastic device and it only has one port, so it needs to be the last in the daisy chain.

That’s a huge difference with the OWC Drive Dock, that has speed and expansion functionality to spare with its two Thunderbolt 2 ports and single USB 3.1 Gen. 1 interface. On unpacking the OWC Drive Dock I couldn’t help but smile. This is an all aluminium relatively large square box with independent power switches and LED activity monitors per drive bay, in addition to an overall on/off switch at the back of the unit.

The top is made from a robust matte black plastic sheet which folds the inwards-swinging dust protection covers. The whole thing is bigger than the RocketStor and built like a tank. This dock doesn’t need to sit at the end of the daisy chain. It also has its auto-switching power supply built-in and like other drive docks accommodates both 2.5in and 3.5in drives.

The whole experience is much more comfortable with the OWC Drive Dock than it has been with the RocketStor — even the SATA interfaces inside are more robust. Traditionally, people have been using docks to give bare SATA drives a second life, but I have been using the OWC Drive Dock over the past couple of weeks for a load of tasks, including backups, offloading media to internal drives and RAID systems, and more. The one and only thing I could possibly have wished for is the SATA connector sitting just a bit further off the edge so that I could use it to mount Atomos’ disk caddies when offloading video.

Alas, no such luck and for a good reason: the bare drives must rest their back against something in order to reduce the risk of breaking the SATA connector when removing the drive — which you’re bound to do often.

The OWC Drive Dock’s Thunderbolt 2 capabilities open up new usage scenarios besides the ones I mentioned earlier. For example, I tested the dock using two identical WD drives set in a RAID 0 configuration to create backup copies from video offloads quicker. It worked like a charm, although you must ensure both drives are switched on simultaneously to avoid RAID errors.

I also tested the OWC Drive Dock to start up the Mac from and I found out that I needed to remember switching on the active bay just seconds before turning on the Mac — that I didn’t have to do with the RocketStor. Forgetting it makes the Mac start with its dreaded “System not found” blinking folder-with-a-question-mark icon.

After a few weeks, I’ve more or less fallen in love with OWC’s Drive Dock. Its nice ergonomic design and sturdiness combined with its performance make for a very appealing product, especially given its $269 pricepoint