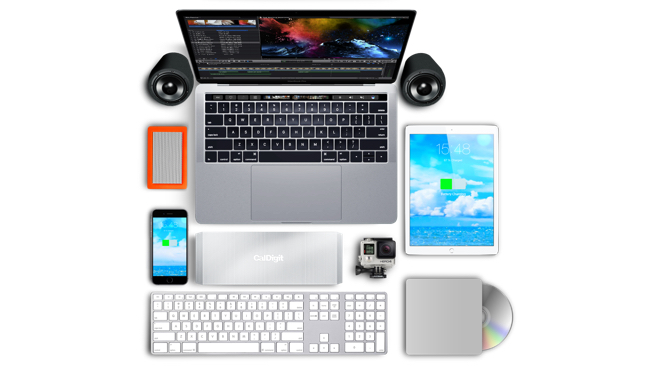 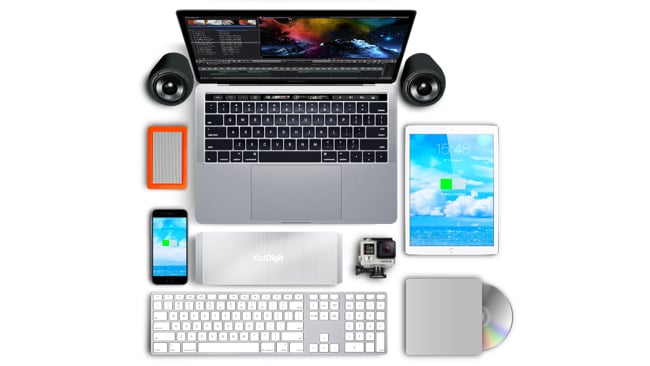 RedShark Review: MacBook Pro 2016 users need a dock to hook up their “old” Thunderbolt gear as well as USB devices, and the most efficient is to buy a dock like the CalDigit TS3 Lite or forthcoming TS3.

The TS3 Lite is available now, with the TS3 coming soon. The main differences with the Lite version and the TS3 are some design tweaks and a lack of full 85W charging, plus a few less ports.

But it still has plenty. CalDigit’s Thunderbolt Station 3 Lite, as it’s known in full, has a design that reminds one of the Elgato Thunderbolt docks. It’s a bit squarer around the edges, made of a much thicker and heavier sheet of aluminium; it has a useful blue status LED on its front bezel; and it has two 40Gb Thunderbolt 3 ports of which one is reserved for upstream connections (clearly explained in the user guide). It also comes with two USB-A 3.1 and one USB-C 3.1 (all gen.1) ports, Gigabit Ethernet, a full-size DisplayPort, and audio in/out ports.

After installing a free downloadable driver, the dock fully supports an Apple Superdrive. Just as with the Elgato, the TS3 Lite needs the driver to unlock its full power capabilities.

In the box, you’ll find the dock, a large power adapter and a 50cm Thunderbolt 3 cable that supports 20V 5A. The inclusion of a 50cm cable is quite exceptional as most other vendors will either put a flimsy, under-performing cable in the box to keep costs low or none at all.

The TS3 Lite has power capabilities but they’re limited to 15W, which is not enough to charge the MacBook Pro I had on loan for this review. However, when you connect one 5K monitor to the Thunderbolt 3 port or two 4K monitors, the 15W power succeeds at slowing down the power drain experienced by your MacBook, so it does have its merits. In addition, the TS3 Lite supports the stand-alone charging of iPads, iPhones and other low-voltage devices.

I didn’t have a 5K monitor to try it with, but I did have two 4K monitors at my disposal. One connected to the DisplayPort while the other was connected to the USB-C port on the TS3 Lite. Neither of my monitors supports DisplayPort or USB-C, so for both, I needed an HDMI adapter. The two displays worked without a flaw.

Not everything on the CalDigit TS3 Lite is perfect. All of the USB ports on the dock are limited to 5Gbps throughput. That’s great for external single-disk storage, but not so great if you want to hook up SSD-based storage that is USB-C compatible such as the G-DRIVE slim SSD USB-C. It worked great with my CalDigit Tuff drive, though.

I was also interested in knowing if the dock performed better than the Elgato when offloading video from an SSD I only use to record video with my Shogun Flame. As the Elgato is connected to my iMac, I connected the TS3 Lite to my iMac as well and compared its USB 3 performance with that of the Elgato Thunderbolt 2 dock. The TS3 Lite mounted the Atomos dock faster than the Elgato and took 20 seconds less to offload the 9.5GB of movie data that was recorded to the SSD.

Availability of the TS3 Lite is immediate and pricing is $199. The higher powered and increasingly ported TS3 will be $299 and is listed as a Q1 2017 release, so hopefully will be out soon.