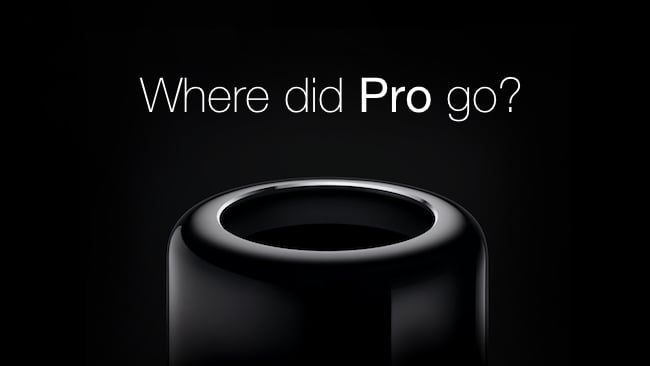 We’ve run a few articles recently about the direction Apple seems to be taking and are reaching the inescapable conclusion that the company that invented the iPhone is being consumed by consumers. “Pro” doesn’t seem to matter any more, “Thin” does. So, where does that leave us?

There’s no need to go through the lead-up to this conclusion in any great detail because it’s very clear: Apple used to be a computer company. It had the word “computer” in its name. We won’t dwell too long on that because arguably everything is a computer today; your smartphone is probably as powerful as your laptop from a decade ago, if not more so (I doubt your ten year old laptop could have powered a quad-HD screen — although iPhones seem to have maxed out for now at Full HD).

In April 2011, when Apple released FCP X to a gape-mouthed audience in Las Vegas, the idea that the Cupertino company was abandoning professionals was given all the evidence it needed in the view of many Apple faithfuls. Personally, I always felt FCP X’s awkward launch could have been avoided if the product was left a) until it was more mature and b) less obviously inadequate for professionals in comparison with its predecessor, and I think it is now fully up to strength. I would be very happy to use it as a credible alternative to all the other NLEs out there (though I am fully aware that many would disagree with me on this).

2013’s 'TrashCan' Mac Pro was controversial from the start, but was given a chance by many professionals because it was a thoughtful, if provocative, design that did at least appear to have some real professional attributes, like a cluster of Thunderbolt 2 ports, and — even though nobody said this — the prospect that this was the first in a long and glorious line of new desktop-based professional gear from the company that invented the Mac.

Well, we know the answer to that now. Despite Tim Cook’s recent assurances that professionals will be supported in the future, not only do I not think that is likely to happen in a way that will actually please professional users, but creative people are both too sensitive and too smart to actually think it’s okay to buy some future computing platform and not expect it to be abandoned like the Mac Pro, like the iMac, and like the Mac Mini have been, while the laptops - even the ones with “Pro” in the title - fall so far behind the technology curve that even luscious, svelte styling can’t redeem them. You only have to look at the comments to recent articles to see that a mass migration towards PCs is underway and has been (I suspect) for a long time. (Health warning: comments are not scientific proof of anything)

RedShark commenter Crowd_Sorcerer summed it up nicely with:

"Professional Mac users don't care what their computer box looks like, as long as it has the right card slots and connections.

Apple doesn't have to do much R&D. Just bring out a modified PC that is powerful and can run MacOS.

Make it a rectangular box. We don't need designer casing. We don't need it to look like a trashcan. Jonny Ives doesn't need to design this one. It's a workhorse. A truck."

I’m in almost complete agreement with this, except that I really would like a professional computer to look nice. Just like the old Mac Pros. I think there would be a day of international jubilation and goodwill to all people if Apple were to bring back the old Mac Pro, unchanged, even, in appearance, but with modern innards. That would not be rocket science. Nor would the marketing. It would be called the Mac Pro Classic: any inkling of a climbdown by Apple would be completely avoided by claiming it to be part of the hipster fashion for all things retro — just with a modern slant.

It’s always possible that Apple knows something that we, the professional community, doesn’t. It’s possible it has new, box-like workstations waiting in the wings, and a cast-iron assurance that they will be regularly updated with the latest technology. Or it’s possible it has some completely new and unheard-of form factor that will be so good that we will wonder why we ever wanted a “conventional” workstation. You can’t discount either approach because Apple is an innovative company with piles of cash in the bank.

You might also hope that they understand the “halo” effect of having a large and influential community of creative professionals choosing to use Apple computers. This is something that aspiring professionals look to when they’re formulating their dream purchases for future years.   (This is another common thread from our commenters).

We’ll know soon enough. By the end of this year, I think the fate of the Mac Pro will be sealed one way or another