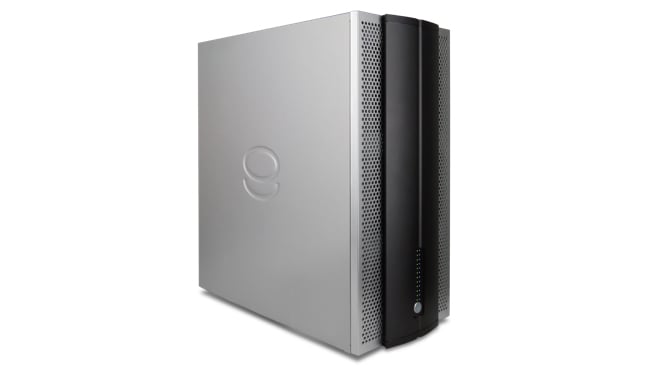 Much Thunder: The T3 has four Thunderbolt 3 connections and a PCIe Generation 3 connector

Thunderbolt is an exceptionally versatile interface. The cables are little thicker than a shoelace and yet it can be the only cable you need to get data to and from a computer. Now it its third generation, Thunderbolt is fast and it’s easy to configure.

But what it’s not designed to do is share storage with other computers. That’s a pity, because if you could share, all sorts of workflows could be built around sharing and collaboration.

You can’t “hack” into Thunderbolt. It’s not amenable to modification. And even if you could it would slow things down.

But what you can do now, thanks to Accusys, is plug multiple computers via Thunderbolt into a shared storage system - a Storage Area Network (SAN) built around a protocol that is ever faster than Thunderbolt: PCIe.

You may be familiar with PCIe because it is the underlying technology in modern PC and Mac system busses. Thunderbolt is remarkable because it’s essentially PCIe on a wire. That makes it fast but also easier to communicate with other peripherals. But although you can daisy-chain Thunderbolt devices together you still can’t connect multiple Thunderbolt devices in a way that would allow you to share data.

But there is a way. It’s technically almost perfect. But it requires fluency in Thunderbolt’s native language, PCIe.

Which is exactly what Accusys has done with their A12 series of shared storage units. Look inside and you’ll find native PCIe. Multiple Thunderbolt devices can plug into it. There’s no speed loss because instead of translating, the data is merely unwrapped from its Thunderbolt transport and exposed as “raw” PCIe compatible data. So this is how you share storage with Thunderbolt, at the PCIe level.

It’s important to understand that this is not everyday technology. It may even be rocket science! But Accusys has been building PCIe switches for several years that allow data to be routed between the physical host ports and storage. The technology is stable and reliable. Now they’ve added Thunderbolt and it’s available to buy.

We had a look at the Accusys A12 T3 Share, which is capable of sharing multiple Thunderbolt 2 and 3 connections. The T2 is specifically for Thunderbolt 2 devices.

Specifically, the T3 has four Thunderbolt 3 connections and a PCIe Generation 3 connector.

The unit itself is solidly built and looks purposeful. It’s remarkably quiet too, with only muted fan noise audible and certainly not distracting, even in the same room. In common with most Storage Area Networks, the T3 has no display output but is easily controlled from a remote device on a network. We used an Intel NUC, which is a very small but quite powerful computer “device” connected to a monitor and a keyboard. Via the NUC, we were able to configure the raid and set everything up. Software provided by Accusys for configuration is clear and simple to use, even though it goes into great detail if you need to.

Also via the network you can connect other computers - Macs and PCs - that can use the T3 as a simple NAS. Third Party software allows in-project workflow sharing.

The T3 is fast. Exactly how fast depends on how you connect it.

With Thunderbolt 2, write speed is around 1Gbit/s, but you can connect two ports for Multi Path I/O (MPIO) and get 1.9Gbit/s.

Speeds above this are limited by the capabilities of spinning disks. With Thunderbolt 3, the speed from the T3 system we saw was just over 1230 Gbit/s. If you populate your T3 with SSDs instead of spinning disks. Speeds of around 2.6 Gbit/s are achievable.

The idea of connecting multiple Macs (or PCs) via Thunderbolt is very appealing - because it’s so simple and undramatic. It just works in a way that was never intended with Thunderbolt, but without breaking any rules. The fact that you can connect other devices through an Ethernet port makes the T3 extremely flexible.

While Thunderbolt 3 is the fastest version of the protocol, Thunderbolt 2 is still available and is by far the most widely adopted version. The T2 is essentially a T3 but limited toThunderbolt 2 I/O, but all T2 units are fully upgradable to T3 level.

Being able to work collaboratively is an incredible boost to productivity. There’s no need to copy material between workstations, and it’s so much easier to preview work. Third party software like Tiger Store even allows Avid bin locking. And this is a great way to work for facilities where a DIT brings in material, ingests it centrally, and therefore makes it available to all other authorised users on the system - editors, compositors, VFX artists and colour graders etc.

This is one of the most versatile storage systems we’ve seen. It’s fast, quiet and incredibly easy to connect to multiple Thunderbolt equipped computers, and it opens up the world of collaborative working in a very straightforward way.

To find out more about the Thunderbolt 3 T3 system click here.