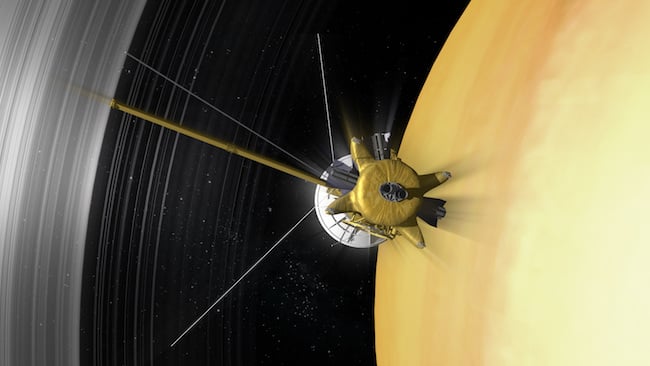 The quality of the photographs coming from remote operated spacecraft gets better and better and the latest NASA images of the Rings of Saturn is changing everything we thought we knew.

NASA's Cassini Spacecraft is half way through its 20 orbit “ring gazing” mission, which elliptically sends the spacecraft outside the edge of the main ring system, and then plunges it deeply through the gaps between the rings and the planet itself. Each orbit takes roughly six days to complete, and along the way, Cassini is able to image Saturn's rings from just about available angle including back-lit and sunlit sides.

The images will vastly improve our knowledge of how much material is in the rings, bringing us closer to understanding their origins. On board, the orbiter has a high resolution imaging system that contains a narrow angle camera which is attached to a reflecting telescope and has a focal length 200mm and a field of view of 3.5 degrees. Then there's a wide angle refractor camera that has the similar specs. Both cameras come with set of around 23 spectral filters, which can be combined and can get a resolution of 1024 by 1024 pixels.

What the images show is game changing. Before, scientists could see the rings clear enough to know their general composition, the new images offer twice the detail, which is showing that Saturn's rings have an icy debris that looks more like straw or propellers. “The new images resolve details as small as 0.3 miles (550 meters),” says NASA, “which is on the scale of Earth’s tallest buildings.” 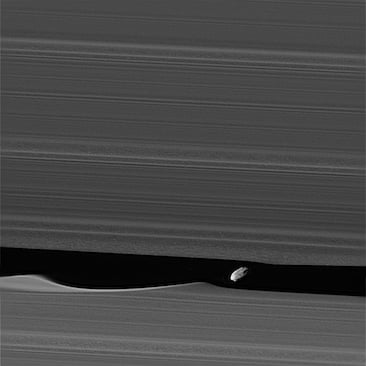 The wavemaker moon, Daphnis, is featured in this view, taken as NASA's Cassini spacecraft made one of its ring-grazing passes over the outer edges of Saturn's rings on Jan. 16, 2017. Daphnis is 8km across and orbits within the 42km wide Keeler Gap.

The icy straw-like clumps are believed to have been small, embedded moonlets that have been bashed together by the close orbits over time.

Once the mission is completed, Cassini will then move to the “grand finale phase,” which will cause the spacecraft to plunge itself into Saturn’s atmosphere, much like it's Huygens probe did for Saturn's moon Titan, except that Cassini is purposely being destroyed in the death dive, so as to protect Saturn's moons from any potential biological contamination from Earth.

The mission will come to an end on September 15, 2017, 20 years after it began. “It’s inspiring, adventurous and romantic – a fitting end to this thrilling story of discovery,” concludes a NASA press release