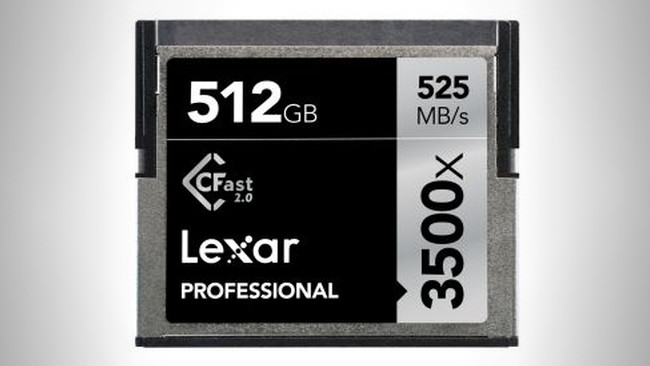 For those that need both capacity and Speed, Lexar has announced a 512 GB Cfast card that will reach a jaw-dropping 525 MB/sec.

CFast is a format of somewhat mixed fortunes. It's hugely capable, having adopted the high-performance interface standard of SATA hard disks in much the same way that pre-existing compact flash was electrically compatible with long-established ATA disks. That's great; we get the performance we need for demanding formats such as uncompressed 4K raw in a card so tiny that the whole recording subsystem has negligible impact on the bulk and weight of a camera.

However, it's hard to avoid the fact that CFast has so far been rather expensive, often more than double the price of compact flash of the same capacity. CFast has usually been more than twice the speed, but in applications that don't unavoidably need the performance, the format has been only slowly adopted.

Today, we can report some progress: Lexar's new CFast card, dubbed the 3500x, has some very large numbers associated with it. In practical terms, this would facilitate nearly 35 minutes of recording in the demanding 250MB/second ProRes 444 XQ format. In theory, recording 4.6K uncompressed raw at 30fps on an Ursa Mini 4.6K, requiring a slightly alarming 513 megabytes per second, we'd get fractionally more than seventeen minutes on a single card. (The 50% offset between raw and compressed, there, is perhaps surprisingly small, but that's a subject for another time.)

The trick, of course, is whether it's actually possible to record 513MB/second onto a single card. It's certainly not feasible to do that on compact flash cards, which top out at an absolute maximum of just under 170MB/second under the most recent UDMA 7 interface standard. Lexar tells us that the new 512GB card will do 525MB/second read (445MB/second write). This is extremely fast for something that could almost be dry-swallowed, but probably slightly too small a margin for recording of rates beyond 500MB/second. It'd probably do 24fps, though, and previous storage has been either too small or too slow to make this practical.

Building this sort of thing is difficult. This card has more sheer space than SSDs of a few years ago. SSDs have also been about this fast for a while, but they have the physical space to use arrays of individual flash chips, sharing out the workload between them. Lexar probably needs to be able to build all of the 512GB capacity of this new card into a single physical device. This means a very low tolerance of manufacturing faults.

Semiconductor manufacturing like this will be reliant on making large numbers of chips and figuring out how much of each one works properly; examples where only part of a flash device works will be packaged and used as a lower-capacity part. This is entirely normal and an efficient approach to manufacturing, but it means that the cutting-edge of capability often requires us to select only those devices which have no faults; we're paying for the chips where everything works. This affects price. Lexar's official numbers hover around $1700 and, while it's available for less, even the best prices around are still more than double that of a (much slower) compact flash card of similar capacity.

Thus, CFast is still expensive, although the principal applications for this sort of thing – shooting slow motion on Amiras, and so on – probably aren't as price-sensitive as most of the flash memory market. The hope, of course, is that ever-expanding capability will make more modest cards more affordable. This remains to be seen; if CFast continues in a niche applicable only to very high-end applications, it may never reach the point of being particularly affordable. In the meantime, if you need it enough to pay for it, the capability is there.