CES 2017 – is this really what the future will look like? 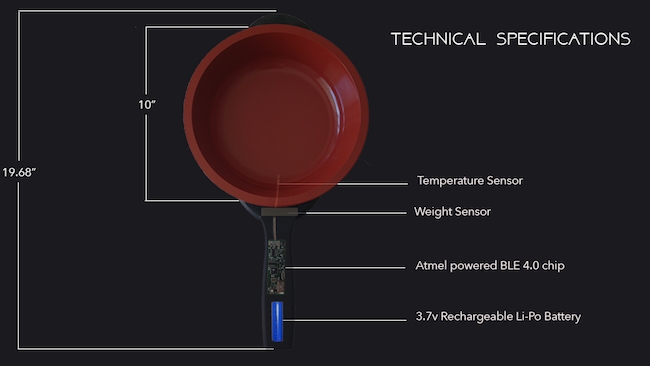 Smartypans: All that technology raises the price of the saucepan to $299

Do we look at CES as a vision of the future, or do we look at it with a mixture of laughter and astonishment at how technology companies can find very complicated ways of doing simple things?

What is notable about predictions of the future is that they tend to be influenced much more by science fiction than science. While futurologists are OK at the broad strokes, it is the details they get wrong. For a century it was predicted in the future all telephones would have pictures as well as sound; what no one saw coming was texting. While many imagined there would be some sort of networked screens in our homes, no one really foresaw YouTube or how much of it would be taken up by videos of funny cats. Many hoped computers would provide a vast amount of encyclopaedic knowledge in every home, few imagined how much of that information would be crazy, misleading or simply fake.

The Connected Home – out of the frying pan…

One theme that emerges from a century of predictions is that of the fully automated home – what we now tend to call the connected home. This is how the 50s saw the future – as one film of the time put it, ‘a press button dream coming true for Mrs Housewife’.

What is remarkable from these films (apart from the unquestioned gender stereotypes) is how unappealing the kitchens seem set against our current desires for food as far away from technology as possible. 21st century food turned out not be based on microwaves and freeze drying but the desire for simple ‘authentic’ food - Tuscan peasant cuisine, artisan bakeries and local organic produce.

But whether we want it or not, the automated/connected home was certainly a major theme at CES 2017 –  everything that can be (and many things that shouldn’t be) was connected to an app. We had connected hair brushes that listen to you hair as it’s brushed so it can tell you what you are doing wrong, connected shoes, cat feeders and cat litter trays, teapots, fridge cameras, beds, pillows, showers, water bottles, mugs, tooth brushes, mirrors, toasters and, if all that is getting too much, WiFi proof underpants that protect you from the ‘radiation’ everything else in your home is emitting. There is even a robot dedicated to folding your clothes.

So many of these devices seemed aimed to make a simple and enjoyable task problematic – solutions looking desperately for a problem - that choosing the most absurd with such stiff competition is not easy.

I was struck by the totally unnecessary Smartypans connected saucepan. If you feel your saucepan is lacking a Bluetooth chip, a battery and temperature and weight sensors, here is the answer. Weighing ingredients and adjusting the gas flame really does not need the assistance of a computer and listening to voice commands from an app to me takes away the essential pleasure of cooking. Enough smart phones are lost in toilet bowls already, let’s not lose any more in the frying pan.

From smarty pans to smarty pants: yes, the first prize must go to the particularly French daftness of Spinali Designs Essential Vibrating Connected Jeans and Hot Pants. At first I was convinced they were a send-up but, I assure you, they are for real – an extremely elaborate, expensive and clumsy alternative to the ring-tone.

‘Active managers and others looking for a solution to combat burnout will find the system particularly interesting. Indeed, the associated application allows you to configure your email settings so that the sensors will only vibrate in the case of very important information. This function eliminates the need to constantly check your phone, thus putting a technological buffer between your connected life… and your need to concentrate and relax while still remaining available for essential matters’.

Which I guess means your pants will vibrate when your lover calls but not someone trying to sell you accident insurance. And you’ll be pleased to learn that ‘If you don't wear them, they fall asleep’.

Futurologists throughout the 20th century predicted the cinema screens of the future would be huge and in colour, 3-D, surround sound and smello-o-vision. Well, they got some of that right. Although 3D TV has been and gone, screens at home have got bigger, cheaper, sharper and louder while cinema screens have got smaller, more expensive and, following the move from 35mm to 2K, lower resolution. (Are cinemas sustainable on this basis? I wonder how long many people will pay a high premium for the pleasure of sitting in the dark with strangers watching a screen that is not quite as good as their TV at home). Nevertheless, the notion of moving towards an immersive, realistic experience almost indistinguishable from reality continues to obsess us.

The concept of Virtual Reality has been with us since the 1980s but much of the initial excitement came more from fantasy literature notions of alternative universes than anything the technology could actually manage. When you consider the first VR arcade machine launched by the UK company Virtuality in the early 90s was based around an Amiga 3000 computer (with a 25Mhz 68030 processor and 2MB memory) you can imagine how disappointing the experience was.

Since then, the VR revolution always seems to have been on the verge of happening, but, although now at least we have technology that can deliver detailed and responsive 3D worlds, there seems to be a general sense of anti-climax.  We have the means but it seems we are not quite sure what to do with it other than extending the gaming experience for affluent niche markets.

So at CES we saw VR shoes that can simulate walking through sand or mud and a prototype Hypersuit – a sort of  elaborate VR exoskeleton that simulates the experience of flying.  Razer Project Ariana offers an immersive experience by extending and smearing the images over your entire room, cleverly adjusting itself to the furniture that is acting as a wraparound screen.

Artificial Intelligence is still not that bright

A major science fiction obsession over the last century has been the idea of machines you can talk to and which will talk back. If you believe Westworld, Ex Machina, and Humans (which you certainly shouldn’t) lifelike synthetic humans are almost with us.

AI is another one of those technologies that never quite delivers what the visionaries imagine. At CES we had creepy robot nannies, destined to traumatise a whole generation and Amazon’s Alexa is joined by the nervously intense Olly, the stone-faced Rokid and the ingratiating Hubble. But voice-activation is a long way from intelligent conversation; anyone who has tried chatting up Siri knows the conversation gets very boring very soon. For the moment, the QWERTY keyboard, based on a 19th century layout disputably designed to slow down the typist, still seems to be the most useful form of input.

However, if all you want to do is buy stuff Amazon’s voice controlled assistant Alexa and the Echo devices that carry her make it possibly too easy.

In Dallas, Texas last week when a 6-year old asked aloud for a dollhouse a Kidcraft Sparkle Mansion duly arrived, along with 4 pounds of sugar cookies. When the story was reported on a San Diego news programme, the anchor’s remark ‘I love the little girl, saying ‘Alexa ordered me a dollhouse,’  triggered Echo devices all over the country to order more. Where will this end? I heard a story that someone in the UK, so impressed with the system, wanted another unit and soon after asking ‘Alexa for another Alexa’, a very expensive package from Arriflex arrived. But that story may be apocryphal…