Steerable lasers: is this how video projectors will work in the future? 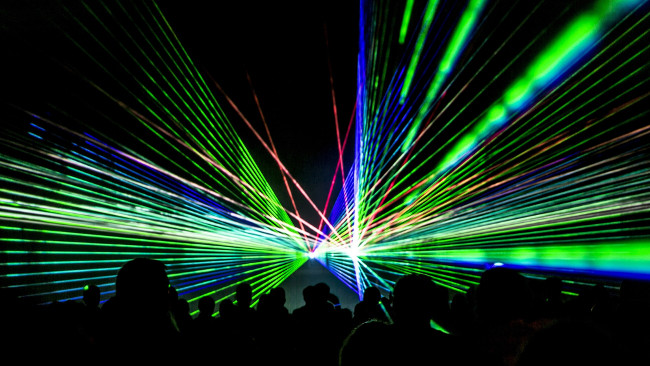 Steerable lasers might be the answer to the "perfect" video projector. As long as they don't burn holes in the screen!

When lasers were first invented, they were routinely described as a solution in search of a problem. After all, a well-confined beam of light where all of the photons were in phase seemed, well, perhaps arbitrarily useful in some way, but it wasn't immediately obvious how. Of course, since then, a million uses have been found, from industrial machining to medical applications and, of course, making nightclub crowds wave their arms in the air and shout "wooh," which is, of course, the principal motivation behind the work of most theoretical physicists.

We mention this in the context of an apparently obscure tech industry acquisition: microchip maker Analog Devices has bought a laser beam steering technology from an American company called Vescent Photonics. This is interesting because the beam steering technique in use doesn't require any moving parts; it's a solid state, unmoving device that's controlled entirely with electronics. Usually, laser beams are fired in different directions by bouncing them off mirrors, which isn't ideal. There's intrinsically light loss at each bounce and practical mirrors are imperfect. They can affect the quality of the beam, scattering some of the light. The main problem, though, with mechanical beam steering is the amount of mechanical hardware that's required to do the job.

Even the tiny galvanometer assemblies used in effects lasers, where the reflecting surfaces are pushed around by magnets, are much bigger and heavier than we'd really like, given that what we'd like is to be able to draw very complex graphics with them and have those graphics animate smoothly. Bulk and weight means things can't move very quickly. In the lighting effects situation, slow movement limits the number of line segments we can draw per second, limiting the complexity of the graphic we can show before it starts to flicker visibly.

Lasers capable of some degree of non-mechanical steering (thirty degrees has been mentioned) have been around for some time. The technique essentially involves a phased array. The idea is that a two-dimensional array of emitters is used and, instead of them all being switched on simultaneously, an extremely short delay is used between adjacent elements. The same approach is used on the radars for modern military aircraft, which can scan the skies without relying on a mechanical, moving antenna or, at least, relying on a mechanical antenna as well, for extra wide scanning capability.

The advantages of solid state are clear: they're fast and potentially lower in cost, containing fewer parts. However, the application which may have sprung to many minds at this point is video projection. If we use the laser beam in the same way we'd use an electron beam in an old-style CRT monitor, to trace out each line of pixels, we need to scan 25,920 lines per second (that is, 1080 lines multiplied by 24 frames) to achieve HD, let alone 4K resolution; the numbers might need to be near twice or three times that for a flicker-free image. Making a magnetic galvanometer scan a wide enough area to draw a reasonably-sized video picture at 26KHz (or 52KHz, or 78KHz) is probably possible, but it's certainly not everyday. A solid-state, electronically-controlled steerable laser might help here.

The thing is, this is not actually how modern laser projection works. Christie's 6P laser projection, which is really designed for better brightness on certain types of 3D material, doesn't fire laser beams at the screen. Instead, it uses the lasers as a high power, colour-tuneable light source, diffusing them onto the surface of a normal DLP micromirror device which does the actual imaging. There are a couple of very good reasons for this, beyond the sheer mechanical issues associated with galvanometer scanning. First is safety: assuming the lasers have the same brightness and something like the same efficiency as the discharge lamp in a modern projector, that's several tens to several hundred watts of laser energy per red, green and blue channel. If, for some reason, the mechanical scanning arrangements failed and a static beam emerged from the projector, well, that's an industrial cutting laser lancing out across the screening room.

The second, more practical problem is speckle. It's fairly clear to see, when a laser strikes a surface, that the spot of light looks speckly. This happens because, again, all of the light in a laser beam is in phase. As it bounces around having struck a surface, various photons will take various routes which will vary very minutely in length, altering the phase relationship. The result is zones of constructive and destructive interference and, thus, the black dotted speckle pattern. Projectors, even the extant Christie 6P system, must take considerable care to minimise the issue of speckle by blending many lasers together. Since different lasers are not synchronised with one another, every time we double the number of lasers, we halve the visibility of speckle. It would be considerably more severe and difficult to solve on a direct laser projector which fired a single multi-hundred-watt beam at the screen.

Direct laser projection has been done, for standard-definition, where a large rotating drum full of mirrors was used to overcome the mechanical problems and create the horizontal scan, but it is not currently a technique receiving a lot of attention and it seems unlikely that the development of this very clever steerable-beam technology will change that. So far, the favourite applications seem to involve LIDAR, that is, object detection and ranging using light, for driverless cars. To search for an application relevant to film and television, we might be able to make quite an effective autofocus device, where the beam could be steered by a finger on a touchscreen, indicating the desired point of focus.

But still, if they can work out how to make the lasers operate in visible wavelengths, this new technology might also cause nightclub effects machines to get cheaper and better.