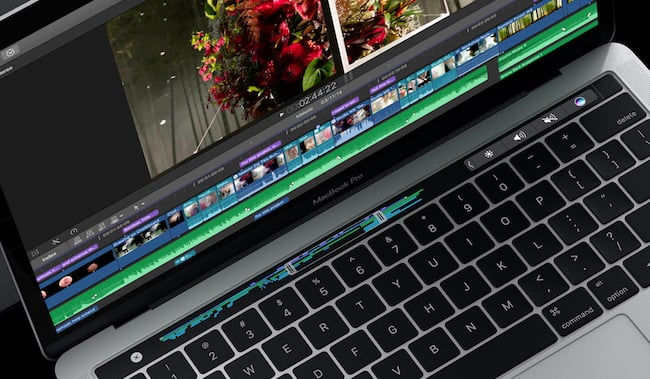 The new Touch Bar gets a good workout with the equally new FCP 10.3

Hello Again Creative Professionals…Microsoft might have stolen some of the innovation thunder with its impressive new Surface Studio, but, from Touch Bars to Final Cut Pro 10.3, K. Stewart finds plenty to be happy about in Apple’s latest large-scale update.

Remember when Apple's laptops were so outrageously priced only truly well heeled professionals might consider them? Well, those days are back. The blurring of the line between consumer and professional MacBooks is gone, sharply polarised by the long rumoured OLED Touch Bar.

The Touch Bar concept has long been rumoured and Apple itself leaked a picture of its Touch ID operation in the latest macOS Sierra upgrade. What was difficult to visualise until now was how far Apple might push it — with the answer being pretty damn far.

As expected, the physical function keys — apparently a 45 year-old IBM innovation — have been axed to make way for an OLED multi-touch strip that also integrates Touch ID with a new T1 Secure Enclave chip.

The OLED bar can, of course, display conventional function keys — including 'esc' — but is infinitely flexible with contextual options based on individual applications and scenarios within apps. This isn't just pause, fast forward icons in iTunes. In Mail, the Touch Bar produces smart auto-suggestions for words, just like typing in iOS. In Photos, you can apply effects such a rotating a picture or changing its brightness level by swiping across a contextual dial. In Safari, you can get favicons for favourite websites or tab selectors.

Possibly the most impressive demonstration was a live DJ session using the Touch Bar in place of custom hardware. The richness of the fluid, sharp multi-touch display — supporting up to ten inputs at one time — was fascinating to watch.

It also looked a little cramped.

A snarky aside about how much 'fun' it was demo'ing a key PhotoShop feature in a few seconds by Adobe's Bradee Evans reflected some of the awkwardness of making use of a new double-size Trackpad together with the narrow Touch Bar.

As with any UI innovation, no doubt there's going to be a period of experimentation and each individual will find their own ways of working with the system — something encouraged by an emphasis on easy customisation.

The range of possibilities on demonstration was enough to make it enticing to simply run through ideas for all your (upgraded) applications exploring how each might work. On a consumer level Air, this could be a killer fun feature. As a professional feature... swiping through PhotoShop filter effects, live previewed in the Touch Bar was fun — but useful?

Evans said the contextual Touch Bar helped surface rich features in PhotoShop that could be lost in its countless menus, while also opening the door to working full screen in photos with key controls in the Touch Bar. It should also be noted how Touch Bar supports different functions depending how long you hold, so the range of interaction is even richer than you might initially expect.

While the Touch Bar could yet turn out to be a gimmick, the thoroughness with which it was demonstrated suggested Apple may have found a way to bring touch to a laptop while avoiding ‘gorilla arm’ and fingerprint smears on your screen. In a post-event interview, Jony Ive said Apple see this as just the start for where they’re going with the technology.

"This is our biggest update to Final Cut Pro X since we completely redesigned it five years ago," claims Apple’s VP of App Product Marketing, Susan Prescott. This is a significant point release and, once again, for existing users of the £230 software it's a free upgrade.

The UI has finally been brought in line with macOS's move to a flatter, simpler look and window layouts are more customisable. There's support for Wide Colour with the ability to log footage from all the main camera manufacturers in real-time while preserving wider colour. More video formats are added including MXF-wrapped ProRes for broadcast delivery, Canon Log2/Cinema Gamut, Panasonic V-Log, XAVC-L at 4K and more.

The key addition, however, is an upgrade of FCPX's signature feature — the Magnetic Timeline which is updated to version 2 with colour coding of clips based on roles such as dialogue, music and effects to provide a more easily understandable overview of a project in a single glance. During the on-stage demo, this made for intriguing usage of the Touch Bar; simply glance down to view and scroll through a project with these vividly coloured different elements.

Most serious FCPX users will have multiple screens — and support for a second screen is also enhanced — but this isn't just a superficial addition. All compound, multicam and synch audio clips are upgraded to the new role-based format which is explained in a 16-page White Paper. The change is substantial enough that Apple suggests you back-up previous files and FCPX itself, so if the new version affects the audio mix of a project you can go back to the old version.

Although Da Vinci support was name-checked by Phil Schiller, it's clear FCPX is still a part of Apple's forward vision. The featured use case of the new MacBook Pro was in an editing studio with a pair of LG monitors plus daisy-chained RAID storage making full use of Thunderbolt 3. The 15-inch MacBook can apparently make use of its discrete GPU to drive 4 4K monitors.

The Gold Standard for Notebooks?

It's been 500 days since the last MacBook update. In part that might be due to Intel's slipping CPU schedule. Phil Schiller made an oblique kind of apology by running a showreel of past Apple laptop innovations, beginning of course with the PowerBook 100 co-engineered with Sony that basically set the template for all the laptops that followed it. The point being that Apple's big laptop releases may take longer, but they make an impact. The third generation MacBook Pro Retina made its jaw dropping debut back in 2012 and the fourth generation is (almost) as bold a move.

The 13-inch model is 17% thinner, 23% smaller and half a pound less than the previous generation. The speakers are far superior, louder with twice the dynamic range. The screen is the best Apple have ever produced, 67% brighter with 25% more colours the sRGB and a 67% higher contrast ratio. Storage is 100% faster, graphics are up to 130% faster while battery life is still around 10 hours and a new cooling system promises quieter operation even under load.

There's no SD Card slot, no USB-2, no MagSafe charging socket. Just four Thunderbolt 3 ports with the form factor of USB-C, any of which can be used to charge the MacBook and (in tandem) a monitor with up to 100 watts of power on tap. Thunderbolt 3 has twice the display bandwidth of 2, so it can run two 4K displays or one 5K display. You're going to need lots of adapter dongles for many devices, including charging iPhones, but thanks to the 12-inch MacBook’s USB-C pioneering debut - these are much more readily available nowadays.

And the headphone socket is, improbably, preserved at least for now.

The keyboard is a second generation evolution of the contentious butterfly switches introduced with the ultra-thin MacBook 12-inch with a little more key travel but still very firm and flat.

Pricing begins at £1499 for a 13-inch 2.0Ghz i5 model but that entry-level model lacks the Touch Bar, has two rather than 4 Thunderbolt ports and was positioned as a more powerful alternative to the MacBook Air, which doesn't appear to be getting an upgrade this year. The real starting price is £1,749 for a 2.9Ghz i5 with Touch Bar and 256GB storage, but just 8Gb RAM. For a non-upgrade-able professional machine, you might want 16GB RAM for an extra £180.

The top of the 13-inch range is £1949 and comes with 512Gb storage, but you still need to pay extra for 16Gb plus there's high spec processor options and a 1Tb storage option for £360.

At least you get a choice of Silver or Space Black whichever model you go for. All models can be ordered now, shipping in 5-6 weeks although the non-Touch Bar model is available almost immediately.

No new Apple Cinema Display, but Phil Schiller took care to properly introduce a partnership with LG on 4K and 5K monitors designed with the new MacBooks in mind. That means Thunderbolt 3 support so the monitors can easily act as a hub for other devices. The 27-inch 5K display (5120x2880) supports the P3 wide colour gamut, as does the 21.5-inch 4K monitor (4096x2304). Availability is scheduled for December. Returning to theme of high pricing, a MacBook Pro and LG monitor make the 5K iMac suddenly look a bargain buy.

iOS 10's remake of the Apple Music subscription service delivered a far more attractive, engaging UI in tandem with smarter personalised track listings to become a truly compelling service. Sadly, rumours of anything similar for Apple TV are being buried under a vision of TV services as a constellation of individual apps, each with their own subscription service where appropriate.

The way in which Apple TV will now 'completely change how you watch TV' is a new app, imaginatively titled TV which acts as a smart aggregator of 1600+ apps to find the content you want, to allow you to continue seamlessly watching a show across all your Apple devices by downloading apps as necessary. Up Next and Watch Now act as smart suggestion listings, based on the shows you like and services you subscribe to.

The TV app will debut in December for the US only. Also demo'd was a Twitter-powered app which mixed a live TV show with a predictable if fun Twitter feed mixing your friend's reactions, GIFs, live analysis and so on. Integrating social media with the more traditional variety is a holy grail of sorts for many in the industry, and this looks an interesting step along the path.