Did we just have a 'Cambrian Explosion' of cameras? 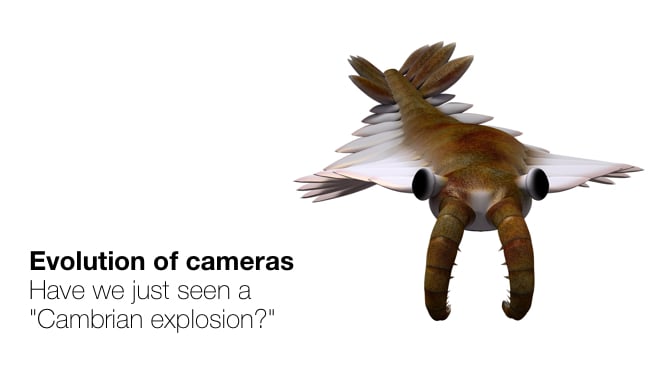 Even with the torrid pace of change in the camera and video worlds, you can expect more change to come from surprising sources.

During the Cambrian period, which started 542 million years ago, evolution seemed to get a rocket boost. In a relatively short time, life on Earth went though massive changes. Before the period started, most life was simple, single-celled organisms. By the end of the Cambrian, most of the complex life forms that we recognise today had emerged.

The change was so dramatic that it's frequently referred to as the 'Cambrian Explosion'.

In a way, what we've seen over the last fifteen years in the field of digital cameras has been analogous to that famous geological period. We've seen an explosion in the number and the capabilities of new cameras. The question is: is this coming to an end?

Whichever way you look at it, the last fifteen years have been remarkable. Digital cameras were available towards the end of the last century, but, honestly, they weren't very good. In fact, the pictures from that time were so poor that film didn't even seem threatened. I remember seeing a digital camera on sale in a local shop with the price marked down and with a note attached saying "please note, this is a digital camera and you should not expect to be able to take quality photographs with it." I owned a couple of devices from around that time and I can confirm that, almost by any standards, the pictures were terrible. Up to a point, though, it didn't matter, because the technology itself was so exciting.

I don't think back then it was very evident that sensors and the processing behind them would be subject to Moore's law, meaning they would improve dramatically over a very short period.

By around 2002, still cameras were capable of two or three megapixels. That's not enough for serious photography, but useful enough for consumers. Taking a picture then was like extracting a still image from an HD video. Pictures were OK as long as you didn't make large prints. Some of the consumer cameras had a very basic video capability, capturing moving images to very low resolution MPEG-1.

Only five years after this, RED launched its RED ONE camera. Able to shoot with 4K resolution and capable of producing 8K still images (one of which was used for a magazine cover), the Irvine-based camera company dramatically showed the world what could ultimately be achieved with video. Meanwhile, Canon's 5D MK II brought cinematic moving images to aspiring filmmakers and started a movement of independent cinema whose legacy is still very evident today.

Accelerating to the future

In recent years, the pace has been maintained by companies like Blackmagic, with its dramatically affordable cinema cameras, by Sony, with its impressive Mirrorless products, and, again, by RED with its astonishingly good Helium 8K S35 sensor.

Just as importantly, across the entire range of professional video cameras, raw video has given us the ability to capture high dynamic range.

But now that we have all the contrast and resolution that we could possibly need, does this mean that the 'explosion' is over?

From our perspective today, it's impossible to say. We would need to be able to look back at this period from perhaps a hundred years in the future.

But I don't think it's over. What's more likely is that the pace will continue and perhaps even increase, but we will see advances in dramatically different areas, like virtual reality, augmented reality and in ways to compress, store and deliver video.

And we will continue to be surprised by products that seem to come out of nowhere. Because the rate of progress now is so vast that we're losing the ability to predict what will happen next. There are good, solid reasons why this is happening, which I will deal with in other articles. Meanwhile, sit back and enjoy the ride.