8K is part of the journey, not the destination 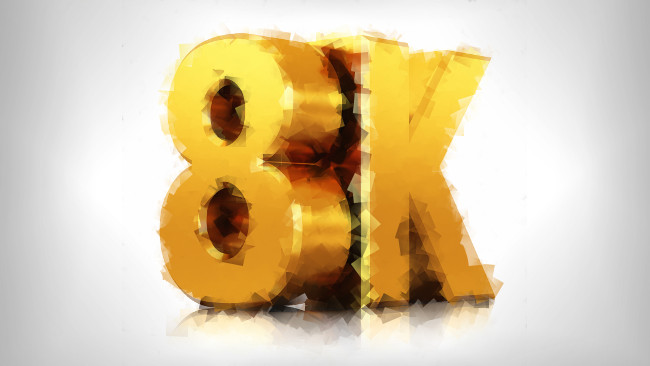 Our industry may be just recently coming to grips with 8K production, but 8K is merely a stepping stone to a profoundly different (and possibly pixel-less) future.

So, how's it going with 8K then? Pretty well, actually. RED's Helium S-35 sensor couldn't have made a bigger statement in support of affordable and managable 8K. There's no doubt now that 8K acquisition is a fact, not a theory. But there's much more to 8K than that.

Because the ultimate video format won't be an array of approximately 32 million pixels. It probably won't involve pixels at all. Pixels have always been an intermediate means to represent images. While it's possible to create and manipulate gloriously accurate and detailed digital images, the point is that we don't perceive using pixels. We don't even perceive using our eyes; we do it with our brains and how we do that is far from clear, but it's getting clearer.

Now, I'm not going to go into detail here, because what I'm talking about is very much in the future, but that future is much closer than we think.

Our brains have a very sophisticated set of mechanisms to turn what we see out there into thoughts and concepts. This process is essentially the "back-end" to "seeing". It seems that we know much more about this area of perception than we used to, although we still struggle with seemingly simple questions like "at what point do we actually perceive something?"

In order to short-circuit all these philosophical questions, let's just say that we do ultimately succeed in turning visual input into thoughts.

It's almost as if, in addition to the process of analogue-to-digital conversion, there's now vision-to-awareness conversion.

And it's this process that we should be focusing on.

The notion of awareness is crucial to even 2D cinema. It's what happens when we engage with a film. When we watch a film, there's a point at which we leave our awareness of our surroundings behind and somehow get involved in the movie. I suspect that this is the same kind of awareness transfer that happens in hypnosis. And it really does happen. Why else would we feel sad or excited by a film, as well as all manner of other emotions?

In everyday life, we are aware of some things and not others. This has to be the case. There's just too much going on around us – too much detail – to take it all in. And it all works fine, as long as we are selective. We don't need to take it all in, as long as we do take in what matters. You might be aware that there's a building in front of you, but it isn't necessary to count all the bricks and to notice all the differences between them.

While it is clear that new techniques like VR call for very high resolutions to avoid pixels looking the size of dinner plates, VR directors are starting to look at awareness as a key factor in VR storytelling, because if you're looking in one direction, then you don't need detail in another. Beyond that, if you can influence the viewer to look at part of the scene, then you can deliberately put more visual resources into that area and move them away from others.

At this stage in our understanding of how the visual process works, all of this speculation is far too early to implement in any useful way, but it's not too soon to start thinking about it. It will be the biggest change in video we have seen yet, and perhaps ever.