Sony has made a new type of screen 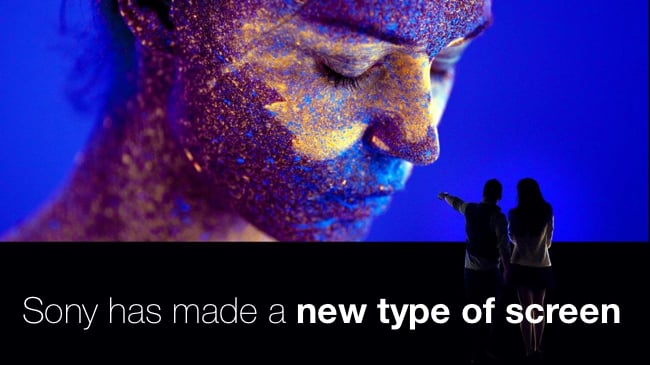 Sony Canvas to be exhibited at IBC 2016.

At IBC2016, Sony will showcase its new Canvas technology, which brings HDR to large screens.

Here's a quick tip for anyone going to IBC in September: Sony's showing its new Canvas screen technology. We're told that this has to be seen to be believed, so if you are at the show, head straight for the Sony stand.

And if you're not going to be in Amsterdam next month, this is definitely something you should know about if you're in the market for an expandable high resolution indoor large screen.

Canvas is a new type of large screen display. It's standout feature is that it has an extremely high contrast range, which means, essentially, that it's capable of reproducing HDR. This may be the first for a large screen.

Typically, LEDs are used for large screens. They're certainly bright enough, but it's been difficult to achieve huge contrast ratios. This isn't the fault of the LEDs, which can individually be turned down to zero brightness. It's more because of the lack of contrast with what surrounds the LEDs. There isn't much point in LEDs being black if the surrounding material is highly (or even slightly) reflective.

Canvas solves this problem almost completely by using extremely small light elements: 0.003mm across, to be precise. The pixel pitch (the distance between the the light elements) is only 1.2mm, so it's easy to build high resolution displays, but even so, an incredible 99% of the surface is completely black.

Apart from being eminently suitable for HDR, the rest of the specs are pretty good. The display brightness is 1000 nits. This is ideal for stage and TV set use, and it would also work well in shopping malls and other indoor venues. Refresh rate with the current generation is 60 Hz, but Sony expects this to increase to 120 Hz. 3D is supported, too.

The pixel pitch is always the same, even across the tiles that make up the display. So, it's possible to make a screen of almost any size – certainly up to 8K.

I haven't seen this yet, but I worked for a short while in the LED Screen Industry and I'm looking forward to seeing what I expect to be a quantum leap in performance.