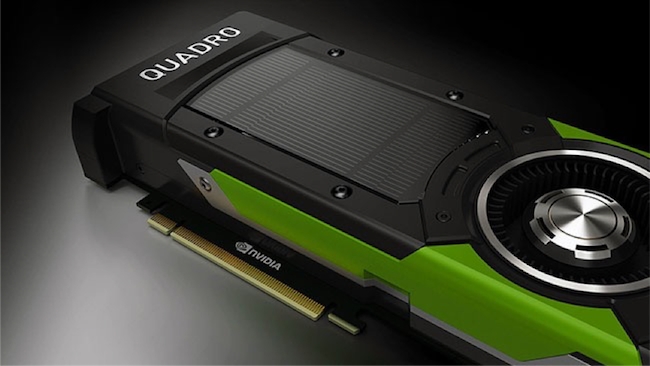 Under a week after the launch of the Titan X, Nvidia has unveiled the Quadro P6000, which it claims to be its highest performance graphics board ever.

Nvidia is accelerating its GPU release schedules. Last week, the Titan X was launched for the new Pascal architecture – faster than Nvidia did for the Maxwell and Kepler architectures. This week with professional users converging on Siggraph 2016, Nvidia gave them a mid-summer Christmas present: Nvidia's fastest GPU ever.

What’s more, alongside the Quadro P6000, Nvidia announced the Quadro P5000. Here are the highlights of the announcements:

It is worth repeating: The Quadro P6000 is absolutely the fastest, most powerful graphics board in the Nvidia family. Not only does it have 24GB of GDDR5X memory, twice the memory of the Titan X, it also has 3840 CUDA cores compared to the Titan X with 3584 CUDA cores. There is no faster GPU in the Nvidia line up.

Virtual Reality, VR, is all the rage in the consumer space. Professionals, on the other hand, have been struggling with VR, stereoscopic 3D displays, and the relevant technical problems for over two decades. The new Quadro products use a technique called single-pass multiprojection. It allows the Quadro P5000 and P6000 to process the 3D scene one time yet generate two perspective views: one for the right eye and one for the left eye. This doubles the performance for stereo projections which, in turn, doubles your budget for complexity and fidelity in the VR, 3D stereo image.

The Pascal Architecture can dynamically balance graphics and computing work on the GPU. This enhances the Quadro's ability to work interactively with realistic, GPU-computed raytracing in the application viewport. Imagine Iray realistic rendering in a Maya viewport for a faster lighting and illumination workflow in VFX scenes.

The professional world is moving beyond 4K. The new Quadro GPUs support DisplayPort 1.4 and 8K resolutions. And they support four simultaneous 5K resolution displays. That is a boon to professionals in video and special effects.

Nvidia loves customers who buy higher up the performance curve. With all the great tools, SDKs, unique technologies, performance and productivity, Nvidia professional products bring great value to the workstation market. But sometimes it seems that the company gives the marketing team just a bit too much rope. Nvidia regularly over-specs the match-up of Quadro products to software applications.

Nvidia is upgrading the Quadro family with the Pascal Architecture faster than any architecture change that I can remember. The Quadro P6000 is not only an equal in raw performance to its consumer counterpart, it is easily superior to it with nearly 300 additional CUDA cores and double the graphics memory. That is refreshing. In addition, the new architecture, combined with Nvidia's excellent GPU-computing support for VFX, video, and colour grading, as well as the features for accelerating VR, make the Quadro P6000 and the P5000 excellent professional workstation solutions.

Pricing and availability details to come.