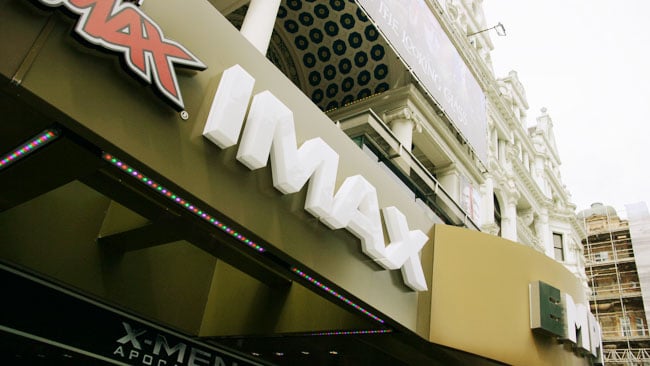 A recent trip to the IMAX theatre at Empire Leicester Square in London gave Phil Rhodes a chance to investigate the quality of current top-end laser projection for theatrical exhibition.

As science fiction has been informing us for decades, everything in the space year five thousand will be powered by lasers. This is something that we've talked about before, perhaps most significantly just after NAB 2014, when several of the major manufacturers showed laser-driven projectors of enormous performance. The comparison, as ever, is with film and readers of our recent coverage of the dual 70mm 3D system at London's Science Museum might find the comparison interesting. Even more interesting are the extreme requirements made of the camerawork that's shown at facilities like this, which are engineered and maintained to a level which clearly shows every possible failure of technology and technique. Imax is, if anything, a wake-up call to camera crews.

Laser technology has only quite recently started to emerge in working installations and has been found particularly suitable for the most upscale setups; none of the manufacturers were ever claiming that the technology would be low cost. It has, perhaps most significantly, become a favourite of Imax, whose move away from 70mm projection received a rather mixed reaction when it emerged that the digital replacement involved 2K projectors. While the carefully-controlled pixel offsetting technique used with this system is genuinely capable of excellent results, which noticeably outshone conventional 2K digital cinema projection, the emergence of a better alternative is no bad thing. 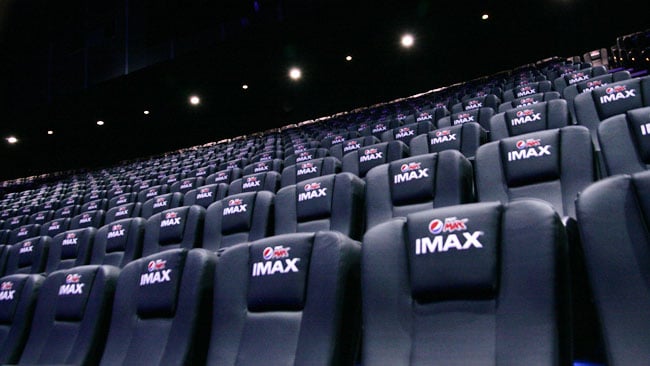 The auditorium was recently refitted for IMAX presentation.

The Empire Leicester Square is one of a very small number of venues which has installed laser Imax; the only other one in the UK is Cineworld in Sheffield. The new installation was announced at the end of 2015 and comprises two 4K laser-illuminated projectors, again using Imax's own pixel-offsetting technique to achieve rather greater real-world resolution. This is probably reasonably competitive with a 70mm print and certainly has better registration, which can be a significant concern with 3D material, where the two images must be very well-registered. Lasers are a convenient source of light for projectors, being capable of producing coloured light, as opposed to the white-emitting xenon lamps of earlier technologies. White light must be split using dichroic filters to fall on the three light-modulating DLP chips, then recombined, whereas lasers can create separate red, green and blue light sources completely independently. 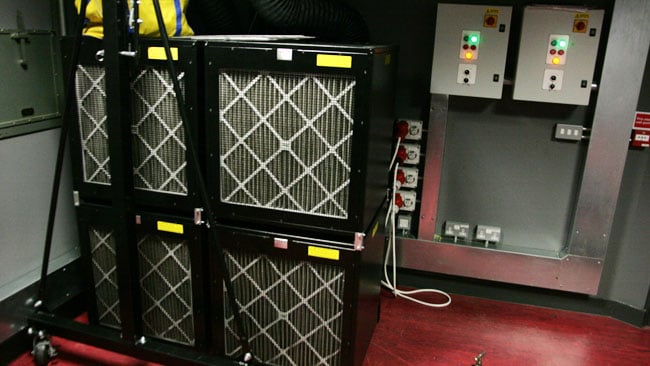 Cooling units for the laser projectors.

The other advantage is the way this is leveraged in 3D presentation, where each of two projectors uses a slightly different set of RGB primaries (the image is preprocessed to avoid this creating a visible colour cast). The audience's 3D glasses use filters with three narrow passbands on each eye, so that both eyes simultaneously perceive a full-colour picture. This can be done with white-emitting xenon lamps, but creating the three narrow bands of red, green and blue light is almost impossibly lossy, resulting in dim and murky images that lack punch. This was never a great idea and, with increasing interest in HDR images, it's an even worse one. Lasers do away with the problem nicely. 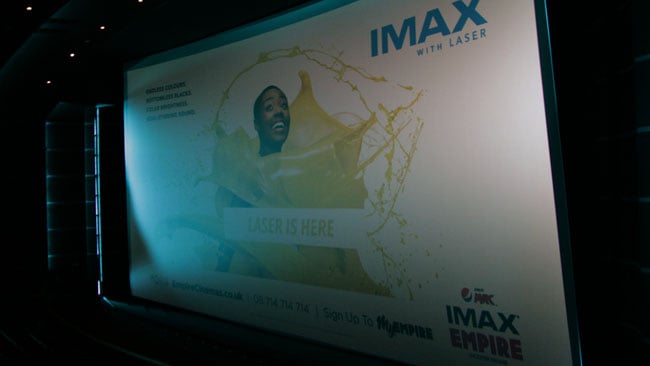 The sheer scale of the Empire's 87-foot-wide screen is difficult to get across in photos.

Of course, there will always be safety concerns: to illuminate a screen the size of the Empire's, at 87 feet wide, many thousands of watts of light are required, whether they're coming from lasers or a xenon lamp. These are the sorts of numbers found in industrial laser cutters and the safety issue is not trivial. What's important to understand, though, is that no laser beam escapes from a laser projector. The projector does not scan the screen with a beam. Although that technique has been used in the past, the safety issues, alongside the mechanical difficulties of creating a sufficiently-fast scan, make it impractical at high resolution. Current designs use lasers (generally clusters of lots of lasers) as light sources only, diffusing the light before bouncing it off the DLP chips and projecting it onto the screen. The only real problem with this is that of speckle, which is quite visible even when aiming a laser pointer at a flat surface. It's an optical phenomenon caused by the constructive and destructive interference of light as it bounces around on a surface that's not entirely flat and, no, a cinema screen is not that flat, at least not to within the wavelength of the light. 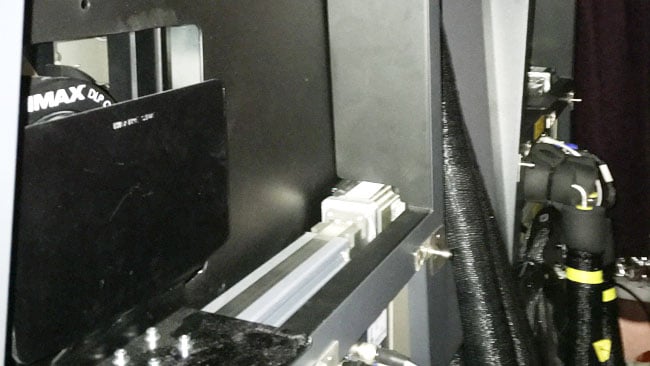 The projector's output aperture is masked with a shutter (left of image) when not in use.

This problem is mitigated to some extent in projector design, where the multiple lasers are not held in phase coherency, so their speckle patterns will differ, and using various techniques of diffusion and polarisation. The screen is also minutely vibrated using drivers mounted behind it, so that the speckle vanishes into a tiny amount of motion blur. While laser 3D projection doesn't actually require the high-gain silver screen of other 3D techniques, the Empire's auditorium has one for flexibility's sake and this can naturally lead to a very tiny degree of hotspotting; within that hotspot, a very tiny amount of speckle can be seen by people who are specifically looking for it. This is more-or-less adjacent to the degree of speckle that was visible in the demonstrations at recent trade shows and is not particularly objectionable.

In short, the enormous installation of projectors, with the lasers built into the bottom and separate cooling plant, is both a pretty impressive physical presence and a representation of more-or-less the state of the art in large-scale projection. The Empire has been used by major film productions to check Imax output and to look for problems and, even on 2K-mastered commercials and trailers, the high standard of projection makes differences between various acquisition and post production techniques terribly obvious. If anything, it's a great leveller and should inhabit the dreams of moviegoers and the nightmares of focus pullers everywhere.

Thanks are due to Chris Tostevin, technical manager at the Empire Leicester Square, for his help in the preparation of this article.