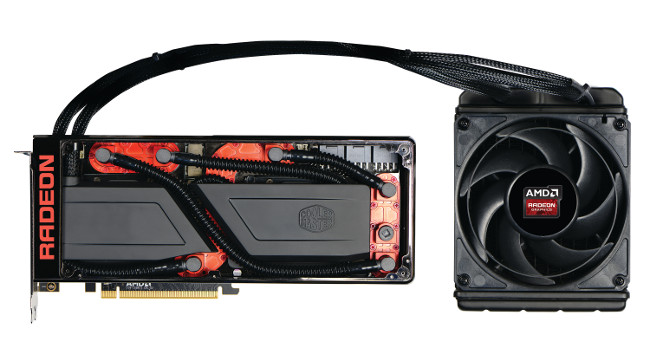 AMD just released a new Radeon which may be ideal hardware for virtual reality users and content developers. By Leo Waldock.

AMD first announced its dual Fury GPU graphics card at its 'Capsaicin' event at GDC in March and now the big day has arrived and you can buy a Radeon Pro Duo graphics card. In the first instance, you are most likely to find the Radeon Pro Duo on sale as a key component in a new workstation. If you can manage to buy Radeon Pro Duo as a bare graphics card, it will cost you a towering $1499, which is likely to be £999 in the UK (and could even be £1099).

While you let that sink in, we'll roll the press release:

Some exciting news from AMD regarding the launch of the Radeon Pro Duo featuring LiquidVR.

Virtual Reality demands ever higher compute performance with rock solid consistency. Leveraging our graphics IP across FirePro and Radeon product lines, our new Radeon Pro Duo with the LiquidVR SDK is the world's fastest platform to enable a world class graphics and VR experience. With the Radeon Pro Duo, it's our objective to solve major problems developers face, by reducing latency and accelerating the VR pipeline through close collaboration with the content development community and with AMD LiquidVR technology. The Radeon Pro Duo is an incredibly advanced and powerful dual-GPU board that delivers the horsepower needed by VR designers, content creators and VR content consumers. We believe products like this will lead to greater immersive experiences.

The AMD Radeon Pro Duo is the initial product of the AMD VR Ready Creator line, and more importantly, it is also the platform of choice for Crytek's VR First initiative.

This program is aimed at nurturing new talent in the field of virtual reality development by powering virtual reality labs in colleges and universities worldwide. As a graphics card that bridges the needs of both VR content creators and content consumers, it's extremely fitting hardware to supply to the brightest up-and-coming developers. We believe these developers will surely shape the future of virtual reality and immersive computing.

The family of AMD Radeon R9 Fury X, R9 Fury and R9 Nano uses a graphics chip that AMD launched in mid-2015 that goes by the name of Fiji. The three significant features of Fiji are the massive number of shaders in the core, a move from GCN 1.1 architecture to GCN 1.2 and the introduction of HBM (High Bandwidth Memory) instead of GDDR5. HBM uses a memory controller 8x wider than Radeon R9 390X, however the technology behind HBM means it currently limits the graphics card to a mere 4GB of memory. On the plus side, HBM requires less power which means that AMD was able to devote more power to the graphics core in Fury, while keeping the overall power envelope at the same level as previous AMD graphics cards.

Fury X made an impressive debut and, when you look at the specification of Radeon Pro Duo, it is clear that AMD has lined up two Fiji chips/HBM packages on one long PCB to deliver a monster graphics card.

The two pieces of information you need to pull out of the specification are the 350W TDP (you will note the Radeon Pro Duo has three power connectors) and the claim of clock speeds  "up to 1000MHz."

The marketing spiel behind Radeon Pro Duo talks about VR content creation and for a very good reason. If you want to play games on your PC, then Fury X will do a fine job and will allow you to push beyond 1080p to 4K. If you are into 4K gaming and want to crank the image quality settings all the way to the max, a second Fury X in CrossFire would probably be a good idea.

What you don't need for gaming is a single massive graphics card with two GPUs on the same PCB, as the end result should be much the same as two lesser cards that have been linked in CrossFire. On the other hand, AMD can reasonably argue that a dual GPU card is ideally suited for producing content for VR, as each GPU can handle the output for one of the two lenses. You will note the screen resolution of Oculus Rift and HTC Vive  (1080x1200 per eye at 90Hz) is pretty much ideal for the Fiji chip, which can drive the screen at full speed with image quality set high.

Fury Nano is absolutely tiny, hence the name, and sacrifices a slice of performance in the name of packaging. AMD speed binned Fiji chips and picked the most efficient silicon for Nano, so a significant reduction in power from 275W to 175W only cost about ten percent performance. This was worthwhile to deliver a tiny graphics card with epic performance, but when you put two GPUs on one PCB, you lose the advantage of the tiny size.

AMD Radeon Pro looks, at first glance, very similar to Radeon R9 Fury X, except you get two GPUs rather than one.

The final part of the equation is that throwaway line in the Press release "AMD Radeon Pro Duo is the initial product of the AMD VR Ready Creator line." AMD tells us that this gaming graphics card will be recognised by the drivers as a professional graphics card, much like a FirePro. If that is correct it may turn out that Radeon Pro Duo is not crazy expensive, but is actually much cheaper than FirePro W9100 in which case we have something new and very exciting on our hands. 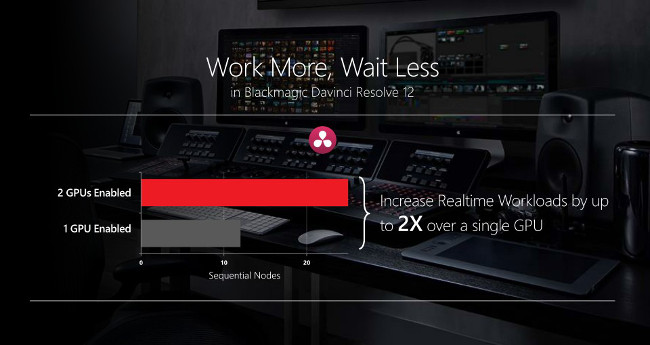 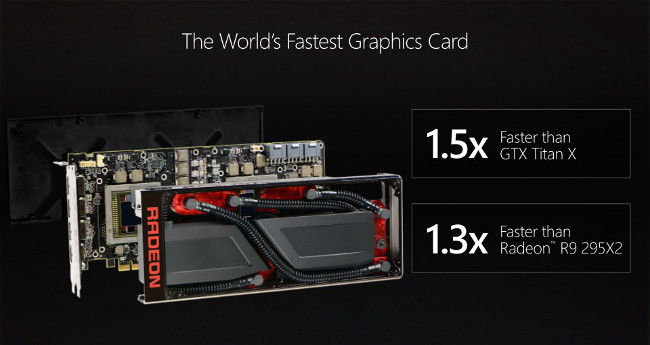 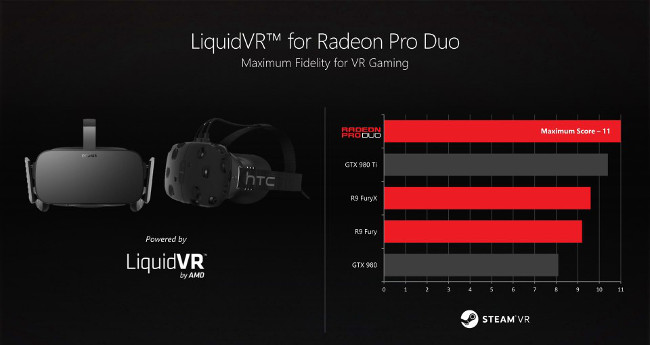 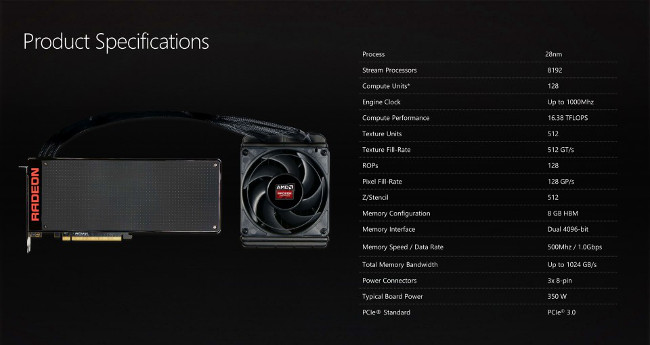