This may be the biggest desktop drive ever: G-Technology G-SPEED Shuttle XL 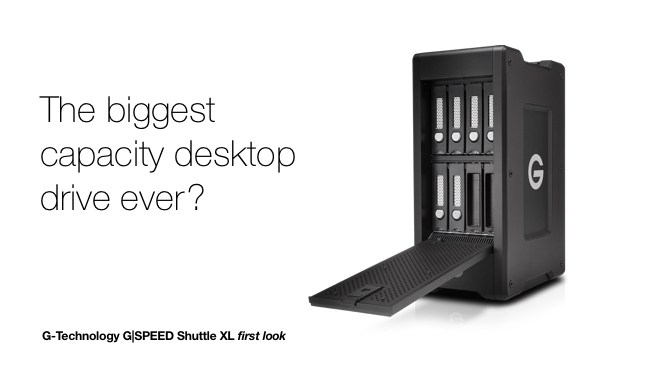 Hard drive capacities - especially when you use multiple drives in RAID arrays - are almost beyond comprehension these days. They’re just colossally big. This, though, is the biggest desktop drive we've ever seen. Here's our "first look" at it.

Someone who’s never worked with digital video might wonder what all the fuss is about. On the other hand, if you’ve seen the transition from SD to HD and HD to 4K - and remembering that 8k is on the near horizon - you’re not going to be at all surprised that there’s a demand for drive units with a simply massive capacity that’s hardware configurable for speed or redundancy (and to some extent, both).

To put this into perspective, HD is approximately five times the data rate of SD. 4K is exactly four times the data rate of HD. And 8K is four times 4K. So 8K is around eighty times SD’s data rate. If you could store your SD production on one disk, you’d need eighty of them for 8K. But in the time between when we left SD and arrived at 4K, drives have of course got a lot bigger, so it’s now possible to build massive capacity arrays in a relatively small space, and for a remarkably low cost.

And it’s probably to address this impending explosion in the need for fast, dependable storage that G-Technology has introduced the Shuttle XL.

On the face of it, it’s a simple idea. Eight drive bays into which you can insert up to 64 TB worth of disks.

But this is very far from Just a Bunch Of Drives (“JBOD”).

The drive, despite its huge capacity, is transportable. It’s equipped with Thunderbolt 2.0 and so is immediately connectable to any suitably equipped computer. Depending on how it’s configured, it can support transfer rates up to 1350 Megabytes per second. That’s enough for multi-stream 4K workflows.

The disks themselves are Enterprise-class, and come with a 3 year warranty. What does “Enterprise-class” mean? Simply that they’re built to last and to be used professionally. They’re made to expect a hard life.

RAID levels supported are 0, 1, 5, 6 and 10. With the included software, it’s all very easy to set up. We had no problems and were up and running quickly.

Remember that this is not a lab test but more of a first look. We configured 6 x 4 TB drives in a RAID level 5 set up. We formatted them as OS X Journaled FS.

We couldn’t test the full potential speed of the array because our MacBooks only have Thunderbolt version 1.0, not the 2.0 that the drive supports. We still easily achieved 800MB/s and don’t doubt the claimed 1350 MB/s maximum throughput. 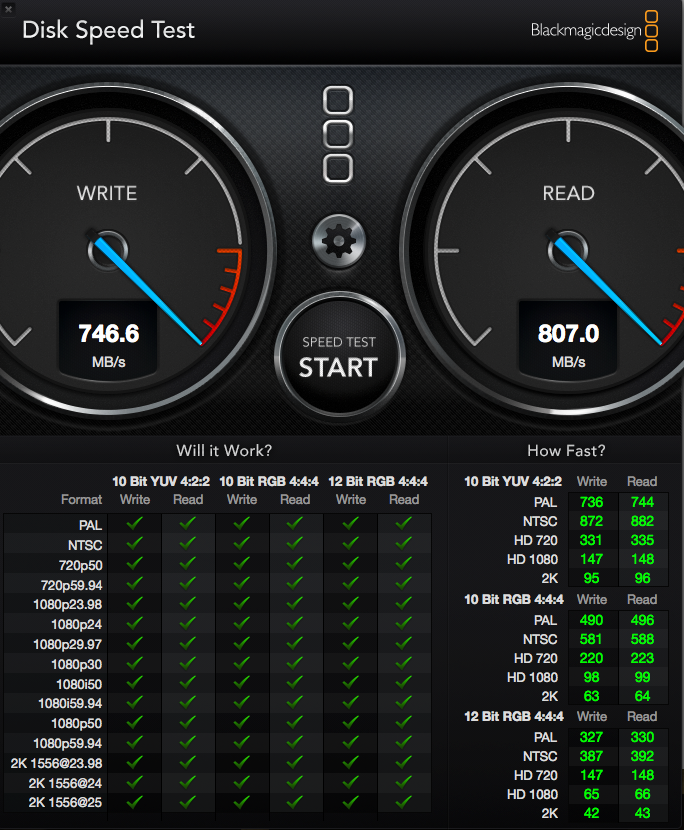 RAID 0, with Thunderbolt 1.0 connected to a Macbook Pro

The Shuttle XL supports Windows and Mac OS X. it’s robust and the design looks impressive; pleasing, even. It feels reassuringly solid in a way that makes you think it will be reliable.

You can buy it in capacities from 24TB to 64 TB. Did we say this is a big drive?

The drive can accept a G-Drive evRAW disk into a spare drive slot, which we think would be ideal for transferring the days rushes onto the larger storage unit. The G-SPEED Studio utility is simple to use, fully featured and has good reporting. It’s available here.

We think this is a significant product because it’s the first time such high capacities, with hardware raid and fast connectivity, have been made available to individuals and smaller production companies.

It means that, at least for the time being, there’s no practical limit to fast local storage. It’s hard to imagine that these drives won’t pay for themselves very quickly.

You'll be able to see the Shuttle XL at London’s BVE on 23rd to 25th February.