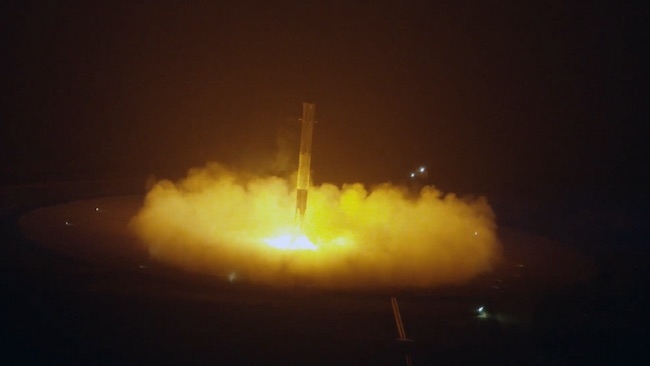 Apologies for hitting you again with another space story so soon, but SpaceX has just pulled off something very, very awesome. It may not look much, but this is a helicopter shot of its Falcon 9 rocket landing back down again after delivering its payload into orbit.

So, what has SpaceX achieved? A 23-storey-tall rocket took off from Cape Canaveral Air Force Station, flew up 125 miles, delivered its next stage payload of 11 communication satellites into low orbit, and, about 9 minutes 45 seconds into the mission, the main stage returned to a landing site about 6 miles south of its launch pad where it made a perfect touchdown.

How hard is that to do? As one of the very happy presenters of its excellent ORBComm-2 Full Launch Webcast which SpaceX live streamed (in 4K we might add) put it: “It’s like launching a pencil over the Empire State Building, having it reverse, come down, and land on a shoebox on the ground... in a windstorm. It’s an insane thing to try and do.”

It might be, but the cheers in the background just as he finished that sentence and the wild scenes of celebration at SpaceX launch HQ that erupted soon after showed that they did it.

The whole broadcast is a good watch — the landing part is around 31.30 on, the take-off around 23.00 — but for those of you who want to cut straight to the chase, below is a 12 second clip of the landing shot from a helicopter. More video will probably emerge as the day goes on.