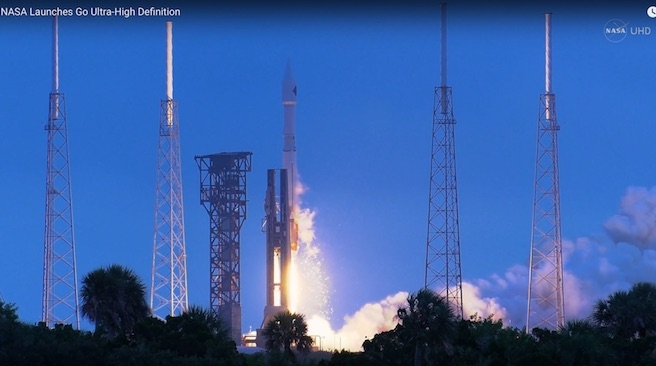 Cygnus on its way to the ISS in 4K

While it’s not quite the Saturn V launches of yesteryear that can still hold us welded to a monitor for hours, Orbital ATK’s Cygnus rocket heading off to the ISS is suitably impressive in 4K.

Of course, rather embarrassingly, the last attempt Orbital ATK made to resupply the ISS failed in a rather catastrophic manner back in October, taking with it a load of food, care packages and equipment. Mission CRS OA-4 was a lot more successful, Orbital ATK’s first Enhanced Cygnus mission making a textbook launch from Canaveral on 6 December.

Even better, it looks like NASA’s partner in its new UHD channel, Harmonic, is starting to document launches in 4K. Six cameras around the launch site caught the lift-off, which apparently included both HFR and HDR options. Harmonic then posted the whole thing together into an 9 or so minute UHD upload that takes the viewer all the way from assembly to launch, with enough super slo-mo loving detail that you can even see the sound waves pass through the billowing clouds of smoke as the rocket accelerates upwards.

Even better it seems that this is a new standard for the agency, the video below being rather happily titled ‘NASA Launches Go Ultra-High Definition’. And even if you’re only watching in HD, the results are rather gorgeous….