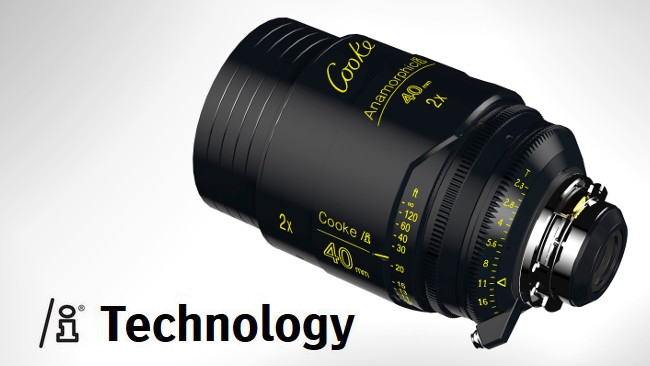 Cooke /i3 is gaining widespread support among manufacturers and software makers that cater to high-end productions.

Until Cooke introduced their /i technology, there was sometimes an odd offset between the features of many high-end cinematography lenses and the comparatively low-cost designs built into cheaper cameras. Often, a PL mount movie prime is a mechanical device (and that alone), positioning glass – albeit with exquisite precision – in the right place to form an image. Other than Arri's Lens Data System, there hasn't been any option to have a high-end lens report its focus position, or even to provide focal length or serial number information electronically to the camera or to associated equipment, such as a recorder or monitor. In the days of 35mm origination, when there wasn't really any straightforward way to record the data, that was perhaps a forgivable omission; now, when quite large amounts of metadata can be trivially recorded, it's something that can make life a lot easier.

Cooke's /i technology, now in its third /i3 (call it 'i-cubed') incarnation, solves this problem and overcomes some interesting engineering difficulties to do so. Many electronic lens systems (Canon's EF, or micro four-thirds) pass data through contacts in the mount, and naturally, most of the PL mounts that exist in the world aren't so equipped. Cooke solved this two ways, by defining a standard for integrated in-mount communications where that could be supported in newly-manufactured mounts, but also by simply placing a miniature connector on the side of the lens.

This is where part of Cooke's good thinking comes into play, because the communications protocol is openly described and based on RS-232 – the thing that most people will think of as simply a serial port. Only some of the more advanced features require a peppercorn payment and a contract signature. Clearly, Cooke intends to be inclusive. This makes the /i system easy to implement on anything from a laptop computer to a monitor to a recorder.

Fujinon has already manufactured lenses capable of supplying /i data via an adaptor, Angenieux has a compatible servo drive unit for its Optimo series, and Zeiss is "adding /i technology to the product line." Even Arri, with its fundamentally competing Lens Data System, is talking about supporting the protocol. This is a level of commercial generosity on Cooke's part, as well as the partner organisations, which is to be greatly encouraged because it creates highly desirable interopability and standardisation.

The information passed over Cooke's /i technology initially included focus distance, aperture, focal length (fixed for a prime, variable for a zoom, of course) and sundry data, such as the lens's serial number. This is perhaps more important than we'd expect, simply because of the inevitable tiny tolerances which create differences between lenses, so identifying matching lenses for visual effects work or stereo 3D production can be quite critical. At this stage, it was already possible for monitors (such as those from Transvideo, one of the companies who have adopted the /i standard) to display lens information, including the calculation of depth-of-field measurements.

Other /i-compatible devices include cameras from Arri, Sony and Red, recorders from Codex and Atomos, and various lens and motion control devices from Preston, Cinematography Electronics and many others. I mention all of these because they are all prominent at the higher end of cinematography equipment and it's otherwise difficult to get an idea of whether /i is gaining any sort of critical mass; based on the list on Cooke's site, things could be far worse.

The latest version of the /i system includes significant new data aimed mainly at visual effects integration. Building an accelerometer into a lens – presumably of a similar type to those found in smartphones – allows a form of inertial navigation to be performed in order to work out where the lens is in space. It won't offer precision sufficient for complete 3D camera tracking on its own, but Cooke suggests that it will make tracking easier, faster and more accurate when allied with more traditional techniques. Other data includes mapping of a lens's distortion profile, which describes the way in which straight lines end up not being quite straight when projected onto the camera's sensor. This is, to some extent, inevitable on all lenses and an accurate profile might again allow for quicker, easier VFX work. The company is anxious to point out that the distortion profile is based on actual measured data for the lens in question, as opposed to a theoretical calculation.

Naturally, the proof of all this is in the software support. It's already in Pixel Farm's very prolific PFTrack software and, apparently, support is upcoming in Nuke's 3D camera tracker. Since Cooke's high-end lenses are likely to be used on exactly the sort of high-end movies that include a large amount of visual effects, the technological approach makes sense. On the other hand, that's still a fairly rarefied part of the industry, as opposed even to the enormous amount of single-camera drama that's made – which might really use only the ability to display focal length and depth of field on the camera assistant's monitor. Either way, it's hard to object to the technology, especially given the openness of the way it's been developed. It's included on Cooke's new anamorphic series, which is currently in the process of being released, with the 65mm macro and 135mm lenses shipping as of a few weeks ago, and more – including a zoom – expected by NAB next year.