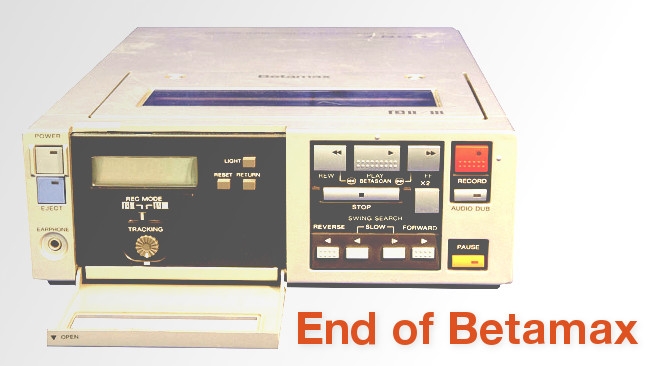 With news that Sony will cease production of Betamax tape, Phil Rhodes take a retrospective look at Betamax and tape in general.

It's been quite widely reported recently that Sony is soon to stop making Betamax tape. Many will be surprised that it's taken this long, given that the format is probably the most famous format-war loser. Even overlooking that, forty-odd years is a pretty good run for a tape system, especially one that helped coin the term 'camcorder'.

Despite common assumption, Sony only stopped making Betamax decks in 2002. What's most interesting about it, though, is not necessarily the well-known story of the format war and the court case over whether it was even legal to make something which had very little purpose other than to duplicate broadcast television. We should remember the rarity and specialism of video recording equipment in the 70s: U-Matic was intended for corporate and industrial use and was nonetheless incredibly expensive and, only fifteen years or so previously, there had simply been no widely available video recording equipment.

The beginning of tape

Early efforts to record electronic moving-picture signals were horrendously cumbersome, with the high bandwidth of video forcing conventional linear-scan designs to move incredibly quickly. The BBC's VERA, the Vision Electronic Recording Apparatus, was more or less a laboratory experiment that relied on spooling wire very quickly between giant reels, and it only predated Betamax by a couple of decades. For comparison, the gap between commercial availability of DVD and Blu-ray (at least commercial movie distribution) was something like 11 years at a time when it was vastly easier to develop electronic devices. Early video tape development went quickly.

The sense of lingering injustice over the famous format war stems from the popular idea that Betamax made better pictures than VHS, that the fight was lost to inferior competition. The reason behind it is that VHS is a composite video format, where a composite video signal – the yellow socket on an old-style TV – is more-or-less just modulated with an FM carrier, so that high signal level is represented by a high frequency recording and a low signal level by a low frequency recording, and thrown at the tape. That's a considerable simplification, but what it means is that VHS is subject to all of the problems that composite video has in regards to bright colours creating crawling dots in the picture.

Betamax records its pictures with separate stripes of information on the tape for luminance and chroma information, rather like the four-pin mini-DIN Y/C video interconnection, which keep colour and brightness separate. While powerful colours may still interfere with each other, the crawling-dots effect is avoided. VHS does, on paper, have rather higher chroma resolution than (the original) Betamax, but the caveats of composite video more than make up for it. Naturally, these aren't problems we face any longer, as practically all digital formats record completely independent information for luminance and two separate chroma channels, but Betamax certainly was better than VHS and for good and supportable technical reasons.

End of a mainstay

The other important contribution is that Betamax was the founder of a great line of tape formats that more-or-less defined standard practice for four decades. Perhaps the last great helically-scanned video tape format, HDCAM SR, uses media that looks more-or-less like that of Betamax (although modern formats invariably use metal evaporated tape, as opposed to the rust-coated plastic of legacy systems). The original HDCAM was, by comparison, perhaps a less worthy member of the family, suffering significantly reduced performance, because the actual data rate of which the tape deck was capable only exceeded that of the standard-definition digital betacam by about 60%, whereas the HD signal contains more than four times the pixels.

Nonetheless, Betamax holdouts can use orginal Betacam tapes in Betamax decks, although ideally not the successor formats (Betacam SP, Digital Betacam, etc). These will work in extremis, but reportedly cause premature head wear in decks expecting metal oxide tape, because of the harder, evaporated metal magnetic coating. Half-inch tape continues to be used in LTO, which seems likely to be the last tape format altogether, although the underlying technology is, of course, wildly different than the spinning-head arrangements of most video tape.

Later updates to both Betamax and VHS would improve the performance of both (particularly adding separate colour and brightness recording to Super VHS) and add features such as hi-fi audio, but by the time that happened, the fight was largely over. Betamax has now officially gone the way of eight-track and Margaret Thatcher and, if anyone needs consolation, consider that it is just one of many dozens of formats that have existed and will exist – the fact that it's being remembered in this way is an indication that it's still held in high regard.