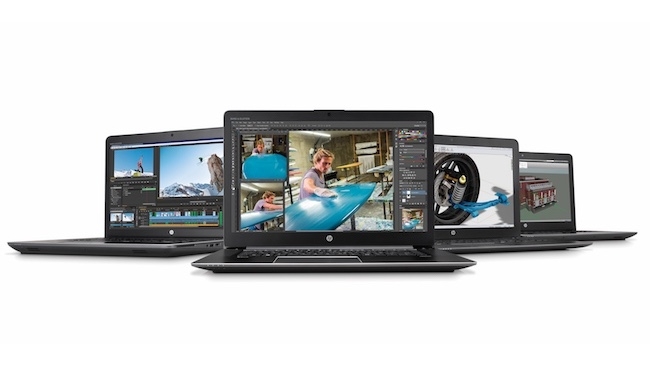 Hewlett-Packard chose New York to unveil the third generation of its Z-series laptop/workstations. Phil Rhodes was cautiously impressed by what he saw.

Given the advertising column inches dedicated to the topic, it'd be easy to draw the conclusion that computing in general is drifting back toward a client-server model, with processing to happen in the literally-nebulous cloud and the workers running around with tablets boasting the processing power of a trumped-up cellphone. Thankfully for those of us working with data that's hard to get onto a cloud server, such as rushes from a film set, HP has other ideas.

The company has existed for over seventy-five years, but will be most famous among film and TV people for its current line of Z-series workstations and laptops. Having said that, HP seems to prefer the term “mobile workstation” for its most recent release, the third generation of the ZBook series. While the specifications are beefy – with a healthy 64GB of RAM available at the high end – perhaps the most directly movie-relevant feature is the inclusion of what HP calls Dreamcolor, but which is of course a calibrated liquid crystal display (no OLEDs yet, more's the pity).

It remains to be seen exactly how far this dedication to colour matching is taken on the laptops, the examples of which we've seen are preproduction prototypes, but some standalone displays sold under the Dreamcolor banner offer factory calibration to all of the most important standards. sRGB, Adobe RGB and Rec. 709 are common across the range but DCI-P3 and Rec. 2020 are available on at least one device. It's been shouted about a lot, but the Dreamcolor line won a technical Oscar in February this year, and is regularly seen on the desks of artists at well-known visual effects houses in behind-the-scenes material. 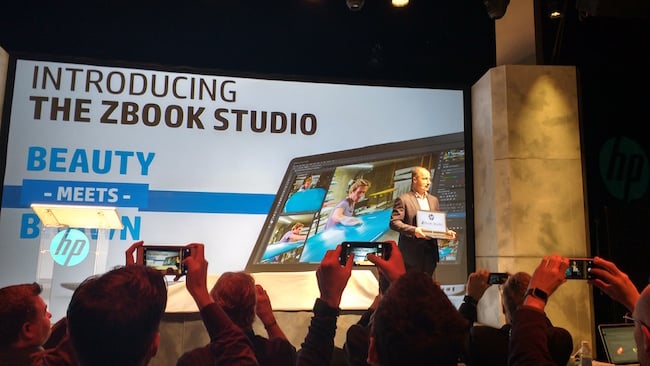 There are four products in the generation-3 ZBook range, three with roughly 15-inch displays and a larger 17-inch version. While it's been possible to get big, chunky, luggable laptops with a lot of hardware in them for a while, and despite the fact that the company clearly wants this talked about and I am therefore cautious about obediently doing so, even the largest gen-3 ZBook is small and light by comparison to the market as it currently exists. Naturally, a laptop computer of any kind with a 17-inch display has at least two minimum dimensions imposed upon it, but the 17-inch version is only 30mm thick and, despite my natural reticence against gushing about these things, pretty lightweight.

The bottom of the range, the ZBook 15u, lacks the precision display support, which unfortunately makes it look a bit lacklustre against its bigger brothers when compared side by side as they were today. However, this does facilitate a significant reduction in power consumption, and thus battery capacity, making the whole thing a lightweight little number.

It couldn't be clearer that the mid-range ZBook Studio is the company's darling, representing what HP clearly feels is a sweet spot of price and performance. This is always a matter of some opinion, since the enormous range of key parts that are available, from processors to GPUs to storage to RAM, permit an endless series of permutations and a company such as HP is free to implement, and clearly capable of implementing, effectively any of them depending on what it thinks it can sell.

Because, like most laptops, the machines can be ordered with a degree of configurability, it's difficult to make definitive calls about value for money and the purpose of a design, but the Studio seems well-specified. Memory, of the most recent DDR4 variety, can be up to 32GB, and the mobile versions of Intel's Core and Xeon processors are supported with at least four cores (plus hyper-threading) available. Nvidia applies the “Quadro” name to its M1000M GPU, which is, according to the SPECviewperf benchmark, double the performance of HP's previous range. Of particular interest to film and TV people will be the terabyte or two of storage, provided by the technology that HP call Turbo Drive G2. This is actually implemented (at least in the full size workstations) with what looks to be the highly respectable Samsung SM951-series PCIe SSD. It'd almost have made more impact if they hadn't rebranded it. Naturally, the guide price of $1699 is unlikely to include all that very, very fast flash, but the upgradability will presumably remain.

Of course, terms like “Xeon” and “Quadro” are just words. Generally, the laptop versions of these devices are not as capable as those which go in desktop computers or workstations, simply because the power consumption, and therefore the battery life and bulk of cooling equipment, would be completely impractical in a portable machine. But that's not really the point: despite the impressive benchmarks, no modern computer really competes on its CPU or GPU horsepower. Any manufacturer can go to Intel or Nvidia and purchase the parts. What differentiates laptops – sorry, mobile workstations - is the way they're packaged up, and, particularly in terms of the Dreamcolor-branded display technology and fast storage, HP does well.

The other way to look at high-end portable computers is in comparison to Apple. The Big Fruit has never been difficult to beat on price for portables, and has drifted away from the serious workstation market in the last few years to the obvious glee of companies just such as HP. Although software availability (Silverstack and Livegrade spring to mind) is a factor in specific markets, it seems a shame that hardware which is generally better and cheaper than Apple's is often overlooked simply because it can't run OSX (though whispers behind the scenes indicate that, with sufficient ingenuity and a willingness to live life somewhat on the edge, it actually can)

Whether Apple decides to turn itself entirely into a cellphone company remains to be seen, but even if it does, HP's recent releases suggest we still shouldn't have any trouble getting hold of a decent laptop.