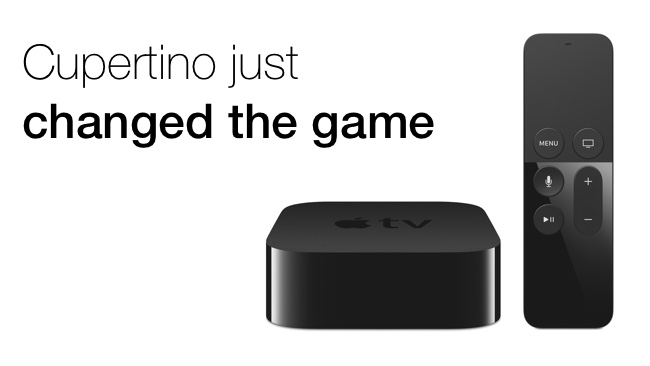 Welcome to the app-centric future

Apple TV boasts the slickest media streaming UI yet, but that's only a fraction of its true potential. By realising an app-based future for television, K Stewart reckons that this device really could rewrite the consumer rulebook.

The last Gen Apple TV was as locked down a device as Cupertino ever shipped: a Spartan media streamer for iTunes content and approved partner channels only.

This new 4th Gen model is a completely different proposition.

Barely a week after release, the App Store is already packed with an array of weird and wonderful apps, from Netflix to Easy CCTV, Zova TV workouts, Airbnb, House Interior Design and countless virtual aquariums, fireplaces and snowfalls. And you’re entirely free to rearrange which apps have the priority positions.

On 4th Gen, Plex is an prominently featured (& free) app with a slick UI that feels perfectly at home on Apple TV.

Elevate this to prime position and you need never bother with iTunes again for your media consumption needs.

There's also Air Video HD which for £2.99 will directly play content from a free media server app on your PC or Mac, Simple X is an unofficial £2.49 Plex client, while movieboxx accesses media on UPnP AV/DLNA servers.

For Big Media companies dragging their heels over tvOS apps and Apple's delayed streaming TV service, this is a reminder people can always obtain content by other means if necessary... 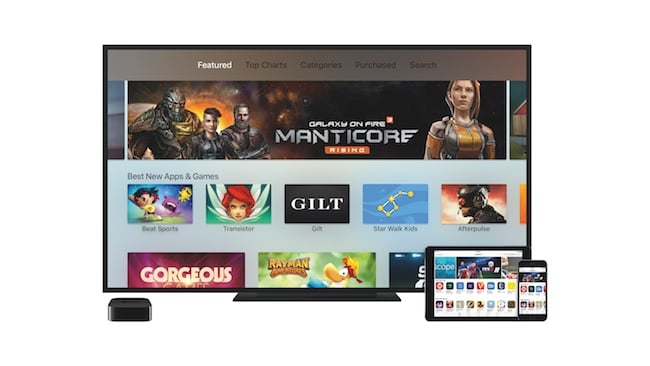 How often nowadays is the 'second screen' where your real attention is while TV provides background noise?

Nevertheless, TV itself has largely remained a bulwark against App-ification due to the balkanised nature of a multitude of smart TV platforms, from games consoles to Android TV to LG’s WebOS 2, Samsung’s Tizen and Panasonic with Firefox OS.

iOS is the world's most lucrative app market and Apple is making it as easy as possible to port those apps to the new UI.

Rather than watching the Beeb’s Travel Show, why not plan the family holiday with Trip Advisor? Instead of a game show, go virtual shopping via Gilt.

In the US, QVC's home shopping has won praise as one of the best apps available due to its skilful blend of video and interactivity.

Ultimately, the established TV business, the Big Media content creators, all depend on eyeballs. Whether it’s selling commercials or justifying a TV licence fee, they need viewers to keep the cash flow up.

Interactive Apps aren't going to draw audiences from Strictly Come Dancing, but will provide another competitive pressure for lesser shows.

The Apple TV UI is so familiar, so fast and slick that zipping between Apps is immediately enjoyable. Just as with your iPhone or iPad, there's an addiction in finding the latest, newest app to transform the screen before you.

In a few years' time, how many children will be watching linear TV compared to those expecting something interactive? And what better platform, right now, than iOS to deliver it?

Those shows and movies we do want to enjoy without interactivity benefit from a smart Siri-driven Universal Search feature that roams across supported apps, so if Netflix is offering Casino Royale for free you know there's no need to buy it on iTunes. During a movie, you can also ask Siri to rewind ten seconds or swipe down to see the credits, turn on subtitles, flick between chapters and access audio functions - including reducing loud sounds for night-time viewing.  All of this is quite nice, even if Siri isn't quite as reliable as in the demos, but the biggest benefit in our view is simply keeping a primary place within the Apple TV UI.

You don't want to switch from Apple TV even if, right now, support outside of the US is still ramping up (in the UK for instance, while Netflix and NOW TV are there and the all-conquering BBC iPlayer is due in a few months, there is as yet no ITV, 4oD, Five etc.

While the latest Fire TV and Roku streamers feature 4K, it's conspicuously absent from Apple TV. Its lowly HDMI 1.4 interface can technically support 4K resolution content at 30fps, but HDMI 2.0 is generally regarded as mandatory for 4K due to copy protection reasons.

Insurgent content distributors such as Netflix, YouTube and Amazon have every reason to grab first mover's advantage by embracing any new technology to set themselves apart.

Rather than simply quadrupling resolution, broadcasters are looking at superior colour depth, higher frame rates, enhanced audio and advanced compression technologies: a true next generation TV standard - AKA UHD-1 Phase 2 that is yet to be fully defined. And TVs that can support a REC.2020 colorspace are not going mass market any time soon. Maybe when they are, we'll finally see a 65-inch Apple UHD-TV...

If the omission of 4K can be justified by uncertain standards, other missing features are more surprising.

Web browsers, however poorly implemented, have been a standard feature of smart TVs for years.

In fact, Apple TV has already been hacked to run a web browser, but App Store rules for tvOS mean it will never go on sale.

There's an ongoing debate between web developers who wish to see browsers add ever more advanced functionality and those whose priority is more app-centric. Basically another front in the Google Vs Apple Cold War.

On Apple TV that debate is resolved quite simply: no Safari, no option for developers to use WebKit to open web links within any App.

The presumed intent is to avoid developers relying on Web pages that the Siri remote is not designed to navigate. To reach its full potential, tvOS needs Apps with native code tailored to is requirements.

Also unsupported currently are Bluetooth keyboards, a feature long supported by the 3rd Gen model and invaluable for entering long usernames and passwords.

Given how well the iPad Air's similar chipset runs mobile Office - as an App or even a web app within Safari, you might wonder about Apple TV's potential as a micro productivity centre, a cheap homework machine.

Clearly there's no imminent prospect of that happening.

Also missing is support for iOS' Remote app, again a helpful means of inputting passwords that's not compatible with the new Apple TV.

Apple's Keychain feature, which securely shares passwords/usernames between Macs and iOS device would be a godsend but for the now takeaway is that those with convoluted passwords need plenty of patience logging into Netflix, Now TV etc. 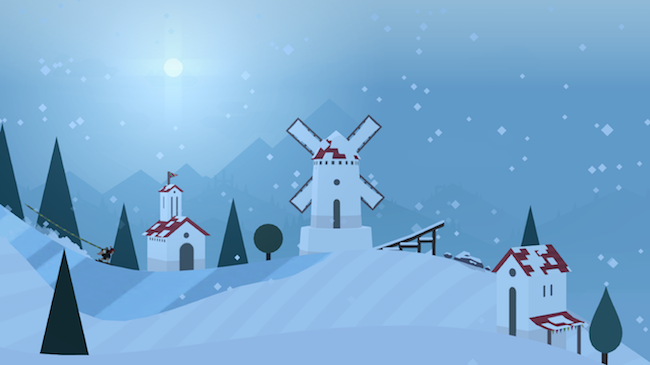 Shortly before launch, Apple made support for the Remote mandatory - despite working closely with Steel Series on the excellent £40 Nimbus gamepad. This seems to have delayed some releases, but the games which have so far arrived offer a tantalising preview of what's possible.

Casual games such as Crossy Road and Alto's Adventure (above) look surprisingly gorgeous blown up on a big TV, while their simplistic controls work perfectly well on the Apple Remote.

Asphalt 8, by contrast, is much better with the gamepad - it's one of iOS's best and most intense racers, similar to Criterion's Burnout arcade series. It's fast, polished and fun. Occasional frame rate stutters don't affect the fun but will hopefully be patched out. It's a substantial download, after a 96 MB initial install, the full game is over 1GB.

In terms of Apple TV exclusives, Beat Sports is a rhythm action game that's most fun in multi-player mode with other players using iOS apps - since the controls are gentle on-screen swipes rather than Wii-style motion control swings, this is less dangerous than it first sounds. It's fun for a while, but doesn't justify the £8 price tag.

Manticore Rising is a simplistic space shoot-'em-up developed for Apple TV as a preview of the next instalment of its Galaxy on Fire series. At first the lightweight Remote makes the game feel unmanageable, and there's no support for a gamepad. However, with a little practice it becomes more fun to play, with auto-fire a natural part of a visually dazzling experience.

Apple TV is no rival to PS4 or Xbox One. Mainstream console games such as Disney Infinity and Guitar Hero are on the release schedule, but these are very much the exception rather than the rule. And multiple user accounts are clunky to switch between.

However, on its first showing Apple TV has certainly got the potential to be an excellent micro-console, the best place to enjoy the casual games which define iOS alongside second tier action games now thought too simplistic for £50 major console releases.

As a media player, you might hope greater storage would open the door to caching a couple of movies but this doesn’t seem to be the case. You watch one movie and going to the next will purge the original from memory.

In future, Apple could theoretically enable a TV series to cache future episodes, but it's not a feature right now.

In terms of Apps, there's a maximum 200Mb limit for any initial download, after which additional assets up to 2GB can be pulled down with a potential maximum per app of 20GB in the cloud.

When PS4 was introduced, one key feature was how installations would be managed to prioritise the first levels, so you could start a game more quickly.

To make better use of as a little as 32GB storage, tvOS goes much further than this and Apps need to be written in a way that respects the fact Apple TV can delete any content as it feels necessary. When you progress in a game, the initial levels and tutorial could be deleted. Or in fact, pretty much the entire game if space is needed for a new installation. With a fast Internet connection, you simply re-download as needed.

Without a fast connection, this can be painful and there's also an issue of ownership. If a publisher withdraws a game from the App Store, there's no obvious way you can be sure of keeping it on your console right now. 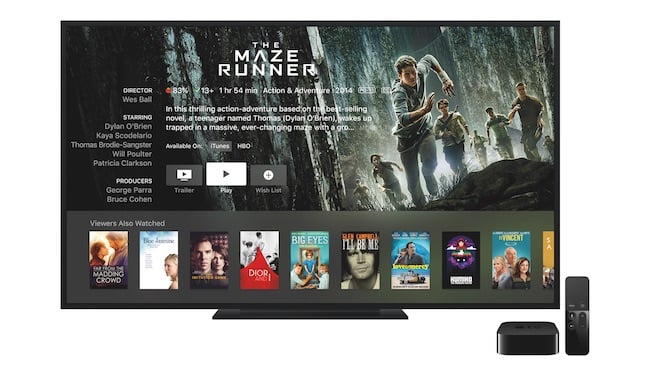 The 4th Gen Apple TV is a vast improvement over the previous version and in UI terms the slickest streaming media device yet.

Small but meaningful touches such as on/off and volume control via HDMI-CEC, the ability to learn another remote's controls, universal voice search and some stunning live wallpapers help transform a basic streaming device into a best-in-class TV experience you'll want to stay within as much as possible.

In the days of analogue TV, BBC One's position on the dial gave it a distinct edge. In today's world, HDMI 1 and the universal remote you usually turn to are the equivalent keys to the kingdom.

If you've invested heavily in iTunes content this is a dream come true compared to the previous machine. It's also, surprisingly, a very serious contender for people who have content on Plex or similar services.

For other consumers, the BBC have promised iPlayer within a matter of months (and in the meantime, Plex has a pretty decent iPlayer channel as a stopgap). Other services such as ITV, 4oD and even Amazon Prime can use Apple TV to relay/AirPlay streamed content to your TV in an effective, but clumsy stopgap.

Hopefully, that situation will change soon and Apple TV's own streaming service should launch in 2016. But the most interesting thing about Apple TV is how conventional TV becomes just another App, one possible destination amongst hundreds of other Apps...