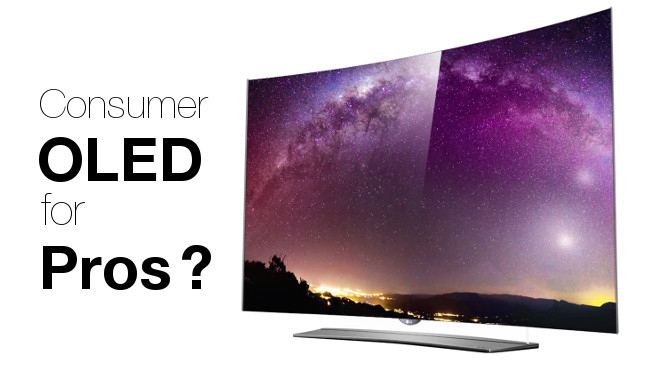 Consumer OLED for professional use?

The rise of OLED 4K televisions raises the question: are we nearing the time when consumer displays will be suitable replacements for professional monitors?

Anyone who's wandered through a consumer electronics store in the last month or so will have noticed that there are now OLED TVs available – and 4K ones, at that.

Okay, so they're curved in profile. While that's being sold as a benefit, it's probably more realistic to see it as a limitation of the manufacturing process that's being used to keep the price down. And the prices aren't actually microscopically low – LG's 55EG960V, a 55-inch 3840 by 2160 display, goes for about UK£3000, which is more than three quarters the value of a Flanders Scientific CM250. But the LG is bigger and it's higher resolution and, well, if it breaks, you can take it to your local electronics retailer and bang on the counter. Sony's BVM-X300, while doubtless a vastly superior device in every respect, capable of high dynamic range and many more advantages, is (wait for it) eight-and-a-third times the cost.

In all seriousness, why are we talking about this? Well, someone's going to want to do it, so it's worth discussing the potential pros and cons of pressing consumer gear into service in this sort of scenario. On one hand, if half the promise of OLED displays is fulfilled in these consumer-level devices, they ought to make at least moderately decent monitors. At some point, there are a limited number of ways in which sheer consumer targeting could mess up an OLED before it became worse than the big TFTs it's trying to replace.

There are problems, of course: consumer OLEDs typically don't cover all of the ITU's recommendation 2020 for UHD material and there will be the usual selection of irritating consumer-oriented processing to switch off. Nonetheless, it remains likely that, with a bit of basic calibration, things like the HD-resolution little brother of the 55EG960V would make extremely serviceable Rec. 709 HD video monitors. Back on planet Earth, Rec. 709 covers the vast, overwhelming majority of material that's currently being produced.

Getting accustomed to OLED

As with any new technology, it's invariably the case that the incumbent techniques (in this case, TFT displays) start to be replaced at the very height of their powers, so for a while, there's often an argument about whether it's worth giving up the sophistication of a well-developed technology for the benefits of a new one. Particularly, with regard to OLED, early devices were notorious for losing blue output over time. That problem seems largely solved now, if only by the expedient of making the blue-emitting subpixels bigger and driving them less hard. With OLED, though, the benefits are more clear-cut, notwithstanding the unconvincing demos in consumer electronics stores that try to imply that a 4K TFT has better contrast than an HD one. Either way, people in certain parts of the market (those parts best described as 'cheap-but-demanding') are going to chase consumer OLEDs. If we can get hold of one to test (it tends to be difficult with consumer gear), we will.

As a final note, though, it's worth airing one of the concerns often raised over OLED. The blacks, it turns out, really are black, and neither audiences nor vision engineers are very accustomed to that. More than one DIT of our acquaintance has complained that nobody likes OLED pictures until the blacks are lifted to compensate, which would seem to be the most egregious example of defeating the object. If, in a few years when we all have OLED at home, we see a generation of early twenty-first century productions with strangely foggy shadows, we'll know why. It's because the monitoring suddenly got too good and nobody could deal with it.