Microsoft's version of our tech future 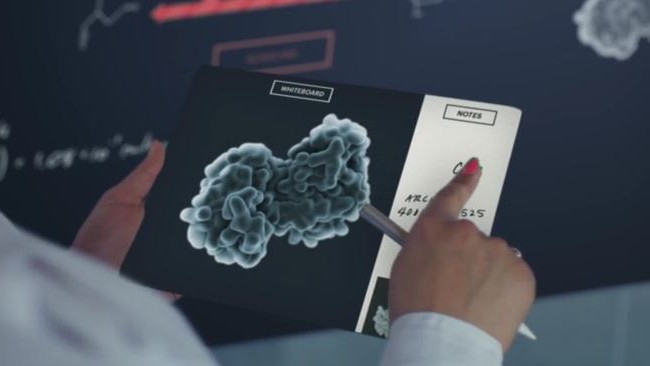 For the last few years and most recently in February, Microsoft has been enthusiastically committing random acts of filmmaking as part of their Future Vision series. It's a strange combination: the material is very nicely-produced, in the vein of a near-future science fiction film, but perhaps slightly lacking in terms of both the working lives depicted and the normal bounds of advertising hyperbole.

The reason we're talking about this now is that there's a growing realisation that practically all film and television production hardware is fated, eventually, to become software. The recent rise of software-defined video networking, in which video-over IP is presented unblinkingly as a direct alternative to SDI, is just one example. Even people used to the gritty tape rooms of old are already much more likely to work with a keyboard and mouse than a bunch of patch cables.

That's been an uncomfortable transition for some, although the idea of replacing task-specific boxes with computers is not new. There remains, however, a significant distance between the be-suited executive world of Microsoft's short films and the reality of dusty fans and sweaty server rooms that exists for the people who actually make this stuff work. OK, fine, the films are made by the Office Labs part of the company and they're clearly going out of their way to present a near-future experience which is relevant to the sort of tidy, corporate ethos they've long since tried to cook up around the Office product line.

But it's not as if there's a Microsoft Film and Television Labs alternative to watch. The company has hardly touched on the field since Windows Movie Maker, which was hardly an Avid-beating product. The treasonous thought occurs that they're deliberately leaving that part of the market to Apple, although Big Fruit's world of glittering whiteness is hardly more relevant to someone hauling flight cases out of a camera truck and into a muddy puddle on a rainy Monday at 6am.

High quality, but for whom?

The actual filmmaking is high-end. Clearly, a lot of the budget has gone on locations and the cool, sparkling look of the production will be aspirational to a lot of people. There's some seamlessly-done (if actually fairly basic) integration of visual effects and the design elements of the virtual user interfaces shown are desirable. There remains a nagging feeling that laying out pages or respecifying components, both of which are tasks that the films show, will always be a messier task than pressing one button – unless these executives are actually just reviewing the work of someone else. In all, though, it's very pretty and much of what's shown, with the possible exception of the advanced display technologies, could be done right now given a huge standardisation effort. The whole thing recalls – or perhaps more accurately predicts – the look of feature films like Elysium, although Neill Blomkamp's politics as presented in that film, unsubtle as they are, again reflect rather dubiously on the vision presented by Microsoft.

One of the nicest things about the Microsoft films is that they're presented almost completely free of language. They are effectively silent films, set to music (although the director would probably call it an "ambient soundscape"). There is no spoken dialogue and it would be easy to rework the visible text to suit international markets, as is clearly the intention. They're attractively globe-hopping and the photography is flawless. The cinematic technique on display is superb and the direction convincing, even if the action on display is someone walking through an airport looking at a cellphone. It's easy to overlook how hard that sort of thing is.

If there's any sort of conclusion to this, it's possibly that content of the films would be recognisable as a desirable future by, say, the people who probably worked on them and that may be an untapped market for some division other than Office Labs to address.