How to calibrate your monitor 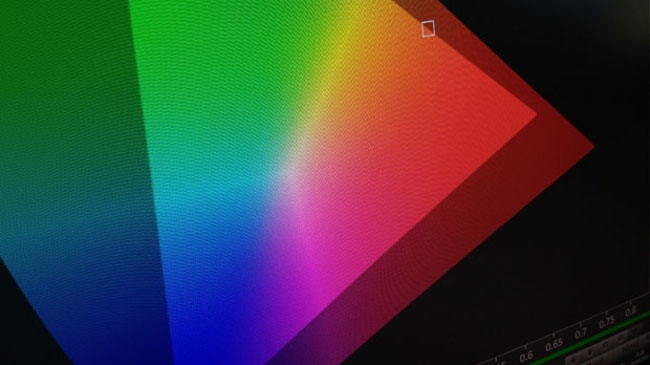 Phil Rhodes provides a lesson on how to calibrate a display for use by image professionals.

We frequently pass judgment on lights and cameras, software and art by looking at monitors, monitors which, if we put a whole bunch of them together, probably match no better than those on the back wall of the average electronics superstore. Even if this doesn't provoke concern, it's much easier to deflect complaints from clients that everyone looks green if you can produce a calibration certificate to the effect that yes, it's their TV, not your carefully-tweaked grade.

Our interest in calibration coincides with the availability of the new BenQ SW2700PT monitor, which we're discussing separately (and arrives, I can confirm, in a very respectable state of calibration). As part of this review, SpectraCal and X-Rite got together to provide a copy of the CalMAN 5 software and an i1 Display Pro monitor probe, which together provide exactly the sort of tools required to ensure the average monitor or projector is in trim. As we discovered with Eizo's CG318 and CG277 displays, the only way to reliably establish what sort of light is coming out of a monitor is to aim some sort of external measuring device at it. 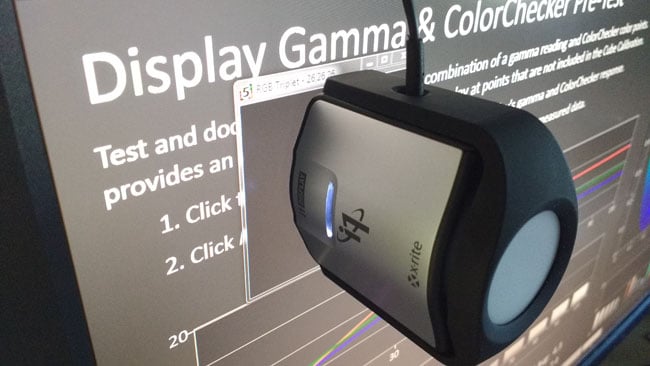 The X-Rite i1 is technically a colorimeter, a device which looks at the incoming light using a set of photodetectors mounted behind coloured filters. Various types of colorimeter are available, but they all use a variation on the same technique. Because a limited number of detectors can't directly measure the brightness at every point on the visual spectrum, the host computer must perform calculations on the results from those detectors to extrapolate what's actually going on. While this may sound a little like interpolation (and a bit approximate), it is a well-understood field and the price-to-performance ratio is high. The i1, at about £150, is probably the lowest-cost option capable of reasonable results and is suitable for periodic calibration of on-set monitoring and displays for general use. 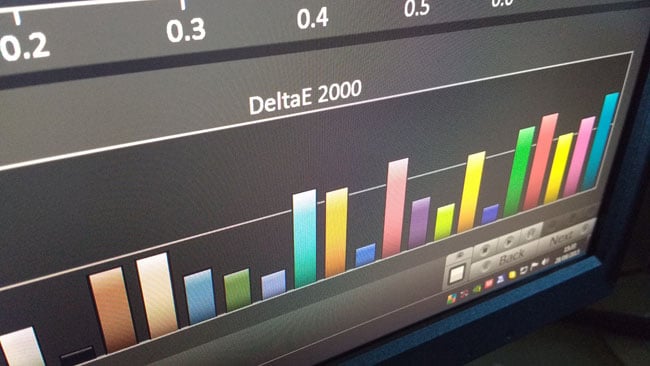 Delta E represents the visual difference between two colours. An error of over 2 is visible; the horizontal line is at 5. This monitor needs calibrating.

Getting really accurate results requires a – deep breath – spectroradiometer, which is a more laboratory-grade approach. In such a device, light passes through a prism (or more usually diffraction grating) so that it spreads out into the familiar rainbow pattern, then passes through a very narrow slot beyond which lies the photodetector. By rotating the prism very slightly, the intensity at different wavelengths can be read. It's slower, but very accurate. They can be used to characterise light sources for colour accuracy, as well, and we'll try to look at one in future.

SpectraCal's CalMAN software manages the process of displaying a test pattern and reading the results with the probe. Simply displaying test colours on a monitor is not necessarily a straightfoward task; the software itself warns that there are too many opportunities for the test colours to be modified by overeager graphics cards and the software that controls them. It will, however, agree to pop up a window on the computer desktop in which the test colours are displayed. More ideally, an external hardware pattern generator can be used or something like a Blackmagic I/O card via SpectraCal's VirtualForge software pattern generator. Once we've performed a calibration, we need some way of imposing the adjustment on the video image. The software will produce lookup tables (LUTs) in various formats suitable for importing into software such as Resolve or for loading into a device such as a Blackmagic HDLink or Fuji IS-mini. 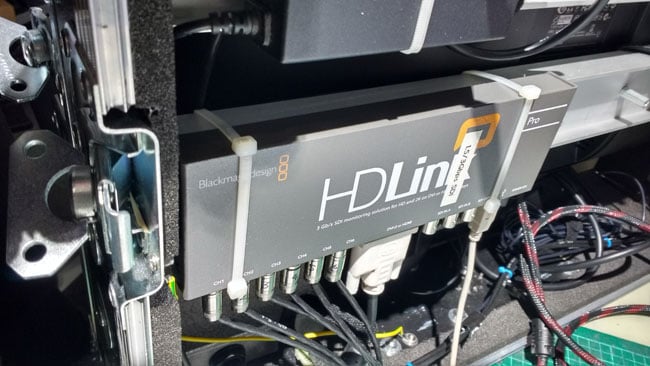 The Blackmagic HDLink installed in a flight case with accompanying display.

The process of setting up a worthwhile calibration environment is, therefore, a multi-step process involving the products of several manufacturers. One of the key capabilities of SpectraCal's software is, therefore, the ability to tie all of these disparate things together and it does so ably, supporting a huge range of different colour meters, LUT boxes and displays. Configuration options are comprehensive and involve telling the software about things like the type of backlight used in the display under test (with options including  cold-cathode fluorescent, RGB LED and white LED), information that is used to inform the decisions made by the probe. 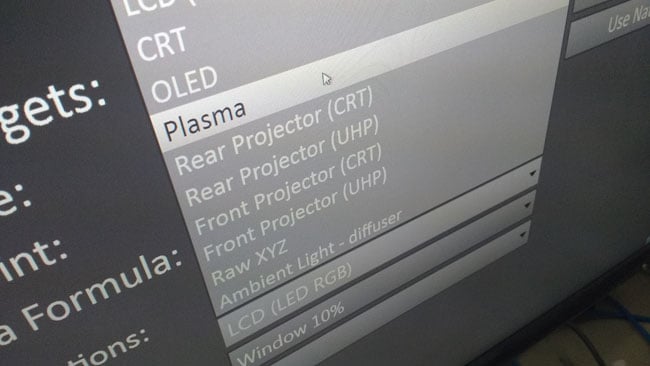 Some probes need to know what type of display is being measured.

CalMAN offers a number of different approaches to calibration, organised principally into workflows (there's also a quick-analysis option to simply run tests and output the results). Perhaps the most important setting is made at the beginning of a test procedure, where the software needs to know what the display is attempting to be, before it tries to measure what the display actually is. Each configuration necessarily involves a colourspace (such as sRGB, Adobe RGB, or Rec. 709), a white point (D65, D55, etc) and a gamma formula (such as ITU BT.1886, which often goes with Rec. 709 colour primaries). 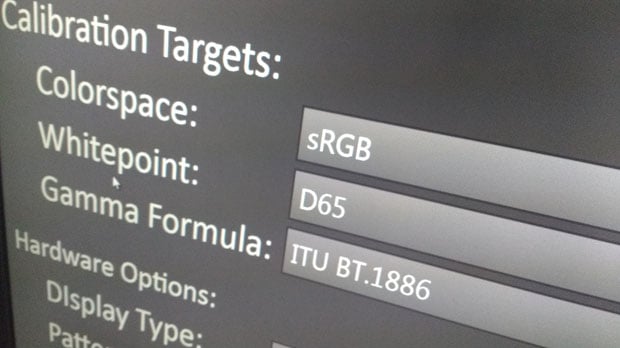 It's possible to deliberately misinform the software about what the monitor is trying to be and this can be used to make a best-possible normalisation of a display to any standard. Trying to make an sRGB computer monitor show DCI P3 digital cinema images is probably a nonstarter, as the P3 colour gamut is larger than an sRGB display is capable of showing. What's slightly more reasonable is to ask the software to look at an sRGB monitor as a Rec. 709 display with ITU BT.1886 luminance response. sRGB and 709 use the same colour primaries, so in this situation, CalMAN will do its best to produce a result that turns an sRGB computer monitor into a Rec. 709 video monitor, avoiding the overbright shadows that might otherwise occur. The company warns that trying too hard with this trick will waste precision in the output LUT and potentially create banding (quantisation noise) in the resulting pictures, as well as distorting colours that are out-of-gamut, but it's a useful trick in certain circumstances. 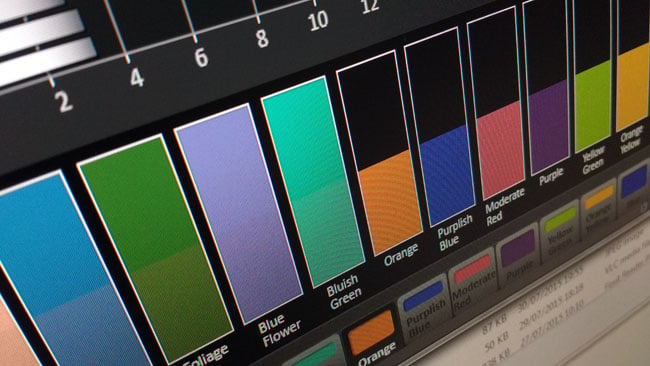 CalMAN gives users the option of trading time for precision.

Calibration can take anything from minutes to hours, depending on precision requirements. There's a 'lighting LUT' option which takes just a few minutes, relying on some assumptions about how predictably the monitor behaves in between the measured points. 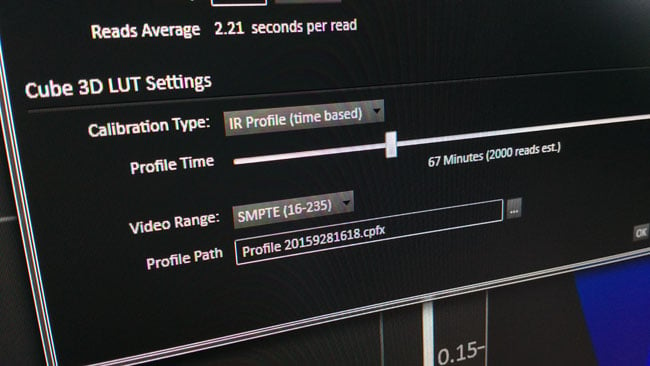 CalMAN gives users the option of trading time for precision.

The CalMAN Business version of the software sells for $1495 (about UK£1000), which is a price clearly aimed at people performing calibration work as a service. Creating a good calibration setup will also require a pattern generator (perhaps just a Blackmagic I/O card), a probe and a LUT box, or compatible software. Nevertheless, the software itself is comfortably under half the price of its nearest competitor. Given the need to implement a huge number of options and specifications, as well as compatibility with a wide variety of external probes, LUT boxes and pattern generators, and given the narrow market of interested professionals (and deadly serious home theatre enthusiasts), the price seems reasonable. If anything is missing, it's an awareness that LUTs are used for things other than calibration: there is not currently any option to combine a calibration LUT and a creative look that might have been exported from something like Resolve, nor is there any way of analysing before-and-after images to estimate the LUT being imposed by another piece of equipment. CalMAN is very much a tool rather than an application and there isn't any way of processing, say, a directory full of stills with a given cube.

Nevertheless, the company itself is very cognizant of these requirements. Although there is no fixed schedule for updates, SpectraCal seems keenly interested in understanding the needs of digital imaging technicians and we should probably expect to see it happen at some point. Even now, though, there is the potential for everyone, not just the high end, to enjoy accurate monitoring.