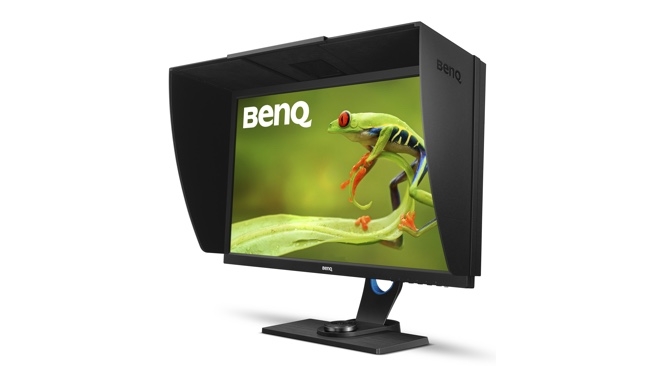 The BenQ SW2700PT is a monitor aimed at photographers that could be an intriguing option for filmmakers and pros who don't need 4K resolution.

When we've discussed displays in the past, it's often been with two applications in mind: first as a desktop user-interface monitor and, secondly, pressed into service as a camera monitor. We're going to jettison the second idea for the BenQ display under discussion today, because it's at the intermediate resolution of 2560 by 1440, which doesn't really lend itself to field monitoring of common camera formats. However, the £500 or so BenQ SW2700PT does present a very nice selection of capabilities when attached to a workstation. 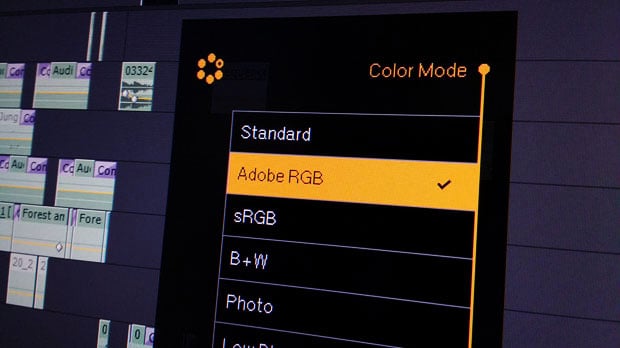 Various colourspaces are supported, although sRGB and Adobe RGB will be of most interest.

BenQ promotes the display as "for photographers," although it isn't really the Adobe RGB colour capability that makes it stand out, so much as the more subjective aspects of imaging performance. The off-axis colour and contrast shift is barely present, placing the display easily in the top quarter of all TFTs. It's vastly improved over something like the Dell UP2414Q that we looked at in January this year. The reason I mention the UP2414Q for comparison is that some places are advertising a fairly similar price for the two displays and because it illustrates a couple of problems that the BenQ doesn't have. First, the Dell's AH-IPS panel is bright, because that particular technology is designed to let a lot of light through, but it suffers really quite severe off-axis colour and contrast problems. These issues are greatly minimised on BenQ's product (which is also an IPS type, of rather different pedigree). It's still not quite as good as the S-PVA panels of yore (I have the SW2700PT next to an ancient Dell 2405FPW which shifts even less), but the price-performance ratio, in terms of white or purple glare at extreme angles, is very respectable. It goes a little cool toward the sides and just dims slightly top to bottom. 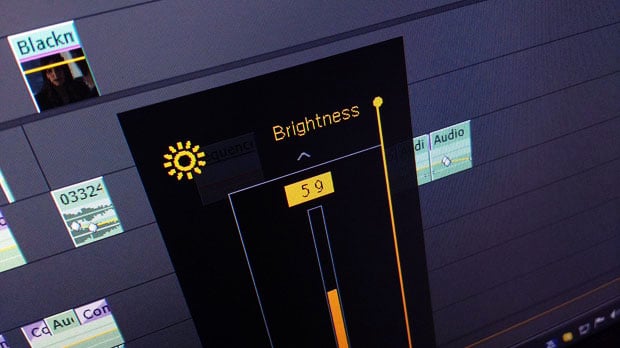 The display is supplied set to 50% brightness, equating to about 180 nits.

The second reason the SW2700 is interesting is because it's slightly larger than the now-commonplace 24" panels that everyone seems to get with their box-shifted PC from a big retailer, but also because it's not full quad HD resolution – and that's a good thing. Twenty-four inch displays (and probably twenty-seven inchers too) feel too small for quad HD resolution, unless the operating system supports high-resolution scaling of the UI elements without making things ugly. The combination of 2.5K resolution and the slightly larger 27" display is just about ideal. The other thing about BenQ's effort is that it is bright – really almost dazzlingly punchy, reading well over 300 nits at max chat. It's not an HDR display, but as a general-purpose computer desktop monitor, it emits plenty of photons. The stated power consumption of 65W is positively miserly, although that probably refers to the display as supplied, at less than full brightness.

The "for photographers" claim implies something about colour accuracy. As luck would have it, the presence of the display coincided with the presence of X-Rite's i1 Display Pro probe and the SpectraCal CalMAN software. These revealed highly respectable accuracy, with a delta E (error) of under four across the wide Adobe RGB colour gamut. A delta E of less than two, depending on whose study you like, is generally considered invisible. If this display is typical of its type, then it's entirely suitable for precision photographic work. Particularly, the grey ramp, which characterises how the monitor displays neutral colours, was highly accurate, with errors kept under three and usually under two, except for the very darkest grey, which is often subject to measurement errors in any case, because it represents such a low level of signal for the probe.

Naturally, the Adobe RGB colourspace is most suitable for stills people, whose industry regularly works to that standard. If there's anything wrong with the BenQ SW2700PT, it's that it doesn't support the Rec. 709 standard used for HD video work, which effectively all sRGB monitors could but very few do. It would be nice to see the industry begin to implement it, given the number of people producing back-bedroom video now. The other objection is that the menu buttons are on the underside of the bezel, which makes for a tidy front-panel appearance, but means it can be a little tricky to relate them to the on-screen display. That and the on light feels too much like one of the buttons. 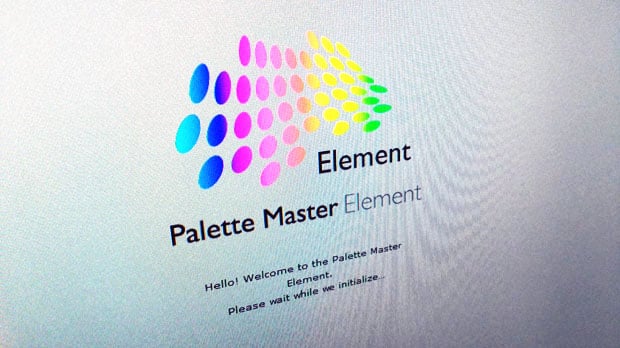 What's particularly unusual is that BenQ supplies quite a comprehensive setup application with the display, capable of performing calibration to various standards. BenQ calls it Palette Master and, while it doesn't even vaguely approach the level of capability represented by something like CalMAN, it does permit access to the display's internal fourteen-bit lookup tables. It's also compatible with the X-Rite probe, as well as the lower-cost Datacolor Spyder. Using the internal LUTs is a great convenience over trying to profile the thing using the somewhat-awkward ICC profile support in many operating systems, although the software could be a bit more comprehensive. If we're going to go to the lengths of providing a user-accessible hardware LUT and calibration software, it would be nice to see support for things like 709, so we can at least run programs like After Effects with some degree of confidence as to what we're looking at. Even DCI P3 overlaps quite considerably with Adobe RGB. It would hardly be a vast extra effort and the hardware should be capable of it. A software update could add it, perhaps.

Menus are clear, although the buttons are a little hidden, underneath.

As ever, a purchasing decision on something like this is guided not only by what the product will do, but also by what competes with it. At this price point, hungry eyes might reasonably turn to the display's big brother, something like the BenQ BL3201PT, which is both higher in resolution and larger to the point where that resolution might be usable. It's also only about 20% more money. However, BenQ doesn't promote the two monitors the same way – the 3201 is part of the "designer" range, designed for CAD work where a big, sharp display is more important than precision colour rendering. It doesn't support Adobe RGB and the calibration options are fewer. As such, it's easy to recommend the BenQ SW2700PT as a desktop display for people involved in film and TV work. It combines the right resolution with the right size and the right price, and the colorimetry is okay; those awkward buttons are the only real downside.