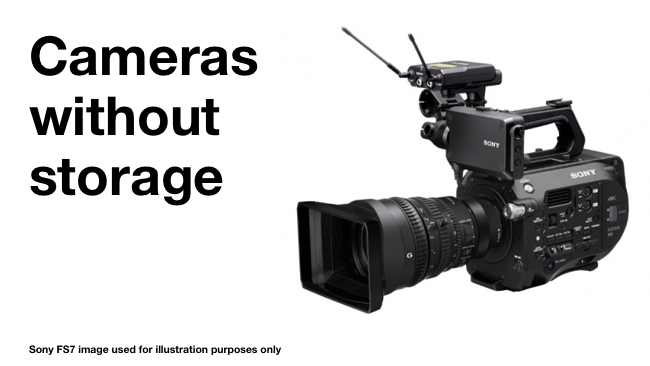 New developments in wireless networks, coming soon, mean that we won't have to use memory cards at all in our cameras

I recently moved from a house in the countryside where I had a maximum of 1 Mbit/s broadband and absolutely no mobile coverage, to a place in the middle of a city, where I have 80 Mbit/s fibre and - unbelievably - the same bandwidth on my mobile phone. There's a very simple explanation for this massive increase: I can see the 4G cellular mast from my window.

You very quickly get used to this abundance of bandwidth. Photos you take on the phone upload to the cloud almost instantly, and videos don't buffer. In fact I often don't notice that my phone hasn't latched on to the WiFi in the house: there's no difference in speed. (And just in case you're wondering about the cost of using all this mobile data: I've got a contract where I get my broadband and phone from the same network operator and have a massive 20 GB per month mobile data allowance).

But even these speeds are going to seem pathetically slow in as little as five years time as the technology behind mobile networks evolves into something that will be known as (no prizes for guessing this one) 5G.

According to this very good article about 5G, the aims of 5G are extremely ambitious:

1,000x increase in capacity
Support for 100+ billion connections
Up to 10Gbit/s speeds
Below 1ms latency

Each of these four points is profoundly important for almost almost every aspect of the technology that surrounds us. For cameras, it can only mean one thing - there will be no need any more for local storage. Actually, it means a lot more than that, but one thing at a time.

A 1,000x increase in capacity is essential. This new bandwidth isn't being dangled as a carrot: it's being driven by demand. Mobile data usage is rocketing and in some ways we're only just getting going. Video accounts for a very large portion of the demand and it's only going to increase as quality and resolution go up.

Only this week we've seen the release of the world's first 4K phone. Such resolutions on mobile phone screens are almost pointless, but it's reasonable to expect that virtually ever movable screen - whatever size - will use mobile data when 5K arrives.

Over the last fifteen years (yes, only fifteen years!) we've seen a rapid evolution in storage technology for video. We've gone from analogue tape, through digital tape to optical disks and we now have solid state storage.

Just now, that's where things have stopped for a while. The original memory cards were pitifully small and very expensive. Now you can store 4K raw video on a memory card that doesn't cost a fortune. Prices have come down and capacity has gone up. This virtuous circle means that it's tempting to think we will never dispense of physical storage in a camera - and that might be true, in emergencies. But, most of the time, we won't need it at all.

Support for a hundred billion connections

That might seem a bit excessive when even with rapid population growth there are only (only!) seven billion people on the planet, but that's not a good indicator of how many connections you need. How many mobile phones are there on the planet? Also about seven billion. But there are of course plenty of people that don't own a phone. Which means that a very big number own more than one. That's not the only reason you need 100 billion connections. The real reason is machine to machine connections. It's things like your electricity meter phoning your electricity company. It's things like your fridge telling your super market you've run out of goat's milk. And it's things like your security camera telling the police that you've got a hedgehog in your garden.

And this is indeed known as the Internet Of Things or IOT. The IOT really is going to need hundreds of billions of connections. Maybe we should be planning for 6G?

Up to 10Gbit/s speeds

This seems insane. How can you get the sort of speeds wirelessly that you need a Thunderbolt connector for with a cable? It is possible. It's just a more intensive application of the sorts of technologies that have given us 4G. It's also using cellular networks in cleverer, more responsive ways. A cellular network is has an almost infinite capacity if you make the cells closer together and connect them intelligently. It helps if you can tie in different types of network, on different frequencies and in all shapes and sizes. This is what 5G is going to do. It's called Heterogeneous Networking.

And remember, whenever you see a wireless speed quoted, it's the maximum speed. In reality, you will rarely achieve this.

But even so, 5G promises massive bandwidth, and more reliably too. As the networks become more intelligent (and more co-operative) you'll be able to "assume" a fast wireless connection most of the time. In the same way that I know I'll have a fast 4G connection when I move from my kitchen to my bedroom, you'll know you'll have a solid 5G connection from one side of a city to the other, and quite possibly in-between cities as well if satellites are able to add to the fun.

There's more reason than ever to expect this, because while it's a minor inconvenience if you drop a call, self-driving cars, which will be commonplace in ten years time, will need rock solid networks, not to navigate, but to optimise their routes and behaviours, and even to communicate with other cars.

If you haven't even thought much about latency, try moving a mouse when you have a delay between your hand movements and the cursor. It just doesn't work.

To put this in perspective, a frame is around 25 milliseconds. If you can have a wireless latency of 1 milliseconds, you can edit across a wireless network in real time.

It's all about responsiveness and accuracy. Such a low latency will make many things not just possible but nice to use.

So how would a camera without storage work? Pretty seamlessly. You'd use remote storage just like a local memory card, but you'd be reassured that it would be safe and fully redundant. It would probably also mean that proxies and other versions could be made on the fly. And editor could start work on your material immediately. A colourist could even grade your material and send you the finished result to see in your viewfinder, as you're shooting. You could work collaboratively with colleagues across the world - while you're still on set.

It might be sensible to keep a backup on local storage, but you'd rarely need it.

At some point, soon, we'll be able to rely as much on a multi-gigabit wireless network as our electricity and water supply.

How will this change things for you? Let me know in the comments.