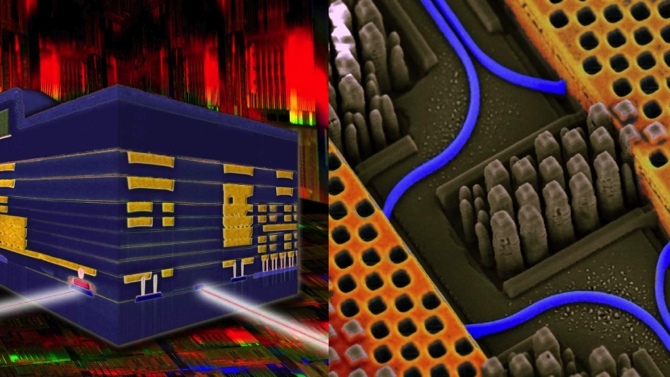 IBM uses Photons instead of Electrons to communicate chip-to-chip. Massive increases in speed and bandwidth predicted.

This was a cue for a few talented individuals like Michael Okuda  to invent a phrases like "Heisenberg Compensator" (without which the Transporter could be a bit unpredictable).

All of which came to mind when reading today's press release from IBM, which sounds more like a missive from the 24th century than the output of a 21st century PR department.

Titled "Silicon Integrated Nanophotonics Technology", it tells us that IBM has announced a breakthrough that will allow light to be used instead of electrical signals to transfer data between computing systems.

Sounding a bit like fibre optics, this differs because the chips used to send and receive the the information-carrying photons can be made by standard chip fabrication processes, which means that they are potentially very cheap to make.

Information can be sent between chips on the same circuit board, or between nearby computers. The technique is so fast that it has the potential to eliminate virtually all data bottlenecks for the foreseeable future. And if that's not fast enough, multiple chips can be used to send several streams of light down the same path. A single transmitter/receiver can transfer data at a rate of 25Gbit/sec.

IBM says this technology has been "verified in a manufacturing environment" - which means that it's not science fiction but can actually be made.

All of which makes the idea of moving 4K and 8K video round an editing facility sound pretty trivial.

Here's how IBM summarised their achievement:

Technology Breakthrough Demonstrates Feasibility of Silicon Nanophotonics for Chip Manufacturing
Light Pulses Can Move Data at Blazing Speeds to Help Solve Bandwidth Limitations of Servers, Datacenters and Supercomputers
After More Than a Decade of Research, Silicon Nanophotonics is Ready for Development of Commercial Applications