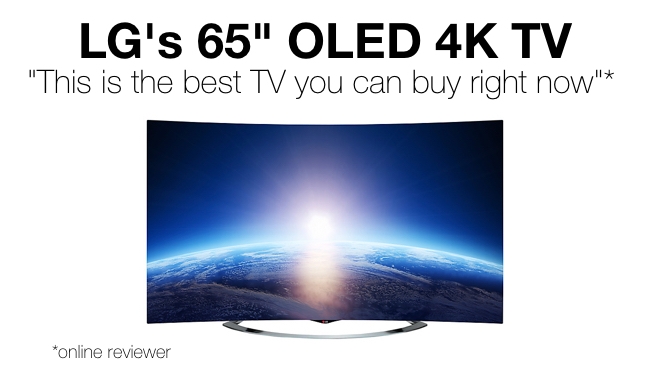 That quote is essentially what virtually every online reviewer on a UK Department store's site said about LG's 65EC970V OLED TV. I thought that too.

I don't visit the consumer electronics sections of department stores very often. I would spend far too much money. One chain of stores in the UK, John Lewis, is fairly upmarket, but offers to price-match too. Often they sell expensive-looking stuff that no-one else sells, so the price-matching doesn't apply. But they're a default choice for many buyers for high price goods, because not only are their prices realistic, but they offer a five year warranty on TVs too.

Which is exactly what you'd want if you were buying into a brand new technology like OLED TVs.

Brand new? Well, not really. They've been around in products for around ten years now but until very recently, OLED TVs have been very expensive, and to make matters worse, very small. Not only that, but they have exhibited questionable lifespans too. That's why you'd want to have that 5 year warranty.

But recently, OLED seems to have found its footing. Poor yields and a difficult manufacturing process have kept prices high and screens small. But all that seems to have changed now. Honestly, £6K isn't exactly cheap, but then the picture you get on these screens isn't exactly shabby, either.

I had some time to kill at the weekend so I wandered into the Radio and TV department of John Lewis in my home town of Nottingham, UK. Nottingham's a big-ish city in the UK, neither conspicuously rich nor poor. It is pretty representative of a wide cross section of consumer electronics-buying society in Europe.

So the electronics department of John Lewis, then, is also representative of what the store expects people to buy.

So what about 4K? It was all over the place. Exactly what we predicted would happen, has happened. More than half of the sets on display were 4K. And around half of those were curved!

Sometime pretty soon, we're going to lose the ability to buy "mere" HD sets in the shops: I reckon within the next two years.

There was only one OLED TV on show. That wasn't surprising, because only one big manufacturer makes them right now: LG. It was also unsurprising because not many would consider spending £6000 ($9000) on a TV these days.

But this was no ordinary TV. It was fully OLED. What's OLED? It's a crucially different technology to "conventional" LCDs.

LCDs filter, or block light. They require a powerful backlight that's always on. To create "black" LCDs have to use their ability to polarise light to block as much of the backlight as possible. They won't block it all, so you never get a true black. Not even close. The best you'll ever get is a sort of medium grey. Your eyes and your brain fool you into thinking you're watching black, because compared to everything else on the screen, it is pretty dark. But it isn't dark compared to true black, and that's the problem. If you want to see a wide dynamic range, you won't be able to use a conventional LCD screen.

OLEDs, on the other hand, are like millions of little light bulbs. Each pixel is generates light, as opposed to blocking it. This is important.

It's important because when an OLED pixel is off, it's really off. Being off to an OLED pixel means that you don't generate any light. So there's no light to shine through from the background, or to spill into other, adjacent pixels.

The effect is remarkable and striking. At the end of a program, when the titles roll, you can peer as closely as you like at the screen, and you won't see any grey pixels. It's just complete velvety black.

So, without having to have especially bright white pixels, you can have a very high contrast ratio, which in turn means that you can display a wide dynamic range.

I had some of my non-technical family with me. They too were astonished at the blacks, which means that this wasn't just a geeky thing - this is something that consumers might actually crave.

For a very long time, OLED technology has been waiting on the margins. This first OLED large screen TV (4K of course) from LG looks like an extremely confident entry to the market. Right now, the world's capacity to build OLED screens is limited, but I've heard that LG is making much bigger plants to manufacture OLEDs in much bigger quantities.