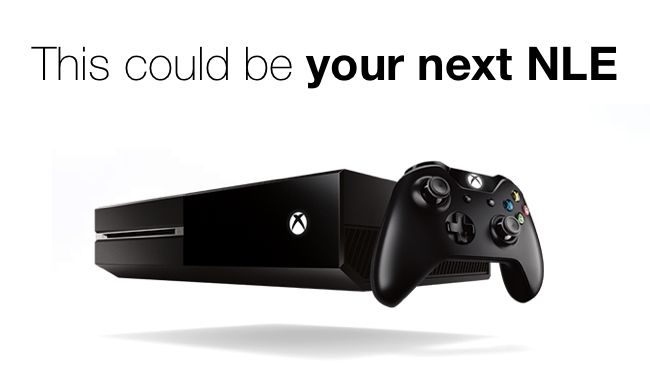 Xbox as an NLE

The graphics power of the Xbox One would make video and graphics applications fly - for only $350.

For the first time, Microsoft is going to port its flagship desktop operating system to its current game console, the Xbox One, in November. This will mean that any "universal" Windows application will run perfectly fine on the console. Plug in a keyboard and a mouse and you will have, for around $350 dollars, a powerful, compact PC.

While this might seem of marginal interest in an era where for at least general purpose computing we're migrating towards laptops, tablets and mobile phones, it does open up the intriguing possibility that we might be able to do video editing on the gaming device.

And if turns out that we are able to do this, it will be a very good thing, because the there's one area where Xboxes really excel: graphics, and hence video.

We've seen this capability before, actually in Sony's PS3. This relatively expensive device was able to remain current right until the end of its life cycle because it had extremely powerful video capabilities, which were almost all due to the specially designed "Cell" processor. This chip consisted of multiple "vector" processors that were ideal for video calculations. Even the earliest demonstrations showed that the PS3 could process and output two independent HD channels at once, and this was back in 2006.

The Cell was so powerful that it even found its way into Sony's professional line of equipment, notably with a stereo 3D processor at the peak of the last 3D bubble. https://pro.sony.com/bbsc/ssr/product-MPE200/

In the nine years since the PS3 was launched, "conventional" processors and GPUs have caught up and overtaken the Cell processor, and the new generation of consoles therefore have components with a more traditional provenance. The Xbox One has an 8 Core AMD CPU and GPU with a throughput of 1.3 TFLOPS.

The reality is that the Xbox one probably has a lot in common with a modern PC but the arrival of Windows 10 isn't going to mean that you'll just be able to run Photoshop on the games console yet - if ever.

That's because while Windows 10 provides a set of core services that are available to "universal" applications that are specifically designed to run across a wide range of devices, any app that needs a more "traditional" Windows environment won't run.

The reality is that Windows 10 on "other" devices than PCs is a bit like the ill-fated Windows RT, which ran on 32-bit ARM-based chips, and which disappointed users precisely because it wouldn't run conventional Windows applications. The problem was that you can't just expect legacy applications to run on an "alien" hardware platform, and a somewhat less powerful one at that. Even though the original Surface tablets worked as well as any other manufacturer's designs, the disadvantageous comparison with the vast repertoire of software available for the full version of Windows was always going to hold back sales. (More recent versions of Surface run full, unmodified Windows, and are much more popular).

But even if Windows native applications won't run on the Xbox, it's not quite the same as with Windows RT, for two reasons.

First, the Xbox is hugely more powerful than the original Surface tablets. It's designed for speed and graphics ability. So, as a platform, it might be worth developers writing video editing and processing software specifically for it.

And while this won't be trivial (and who knows whether it would be worth it commercially?) the AMD chip used in the Xbox one has an X86-64 architecture, which means that porting software is at least one step easier than if it had a completely different internal design.

The advantage of writing video software for a gaming console is simply that it is entirely geared up for processing 2D and 3D video in real time. And, at around $350, it's a very cheap way to access this graphical processing resource.

There are disadvantages too. The whole point about games consoles is that they provide a stable, unchanging environment for games developers to target their software at. But this means that a given console will gradually become less competitive with whatever computer hardware is available at the current time. So, unless some very good video software is in development now, it's likely that when it does become available, it will be running on a two or three year old platform.

Perhaps what's most exciting about this is the sense that, in the future, we may see video applications running on a much wider range of hardware, becoming more portable, and able to use whatever processing power is available either locally, or across a network somewhere.