Do cameras actually change the course of history? 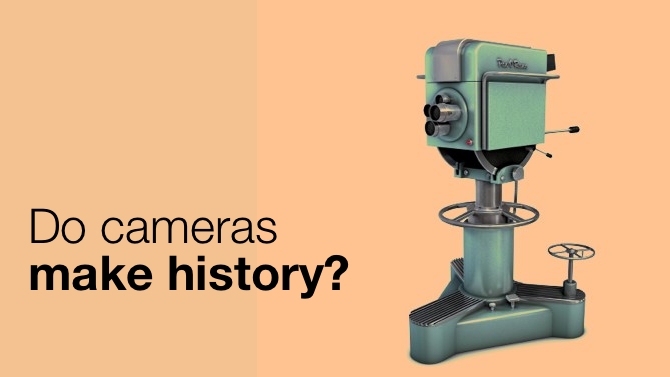 Has the presence of cameras altered the course of history?

One of the more tangible facts about Quantum Physics is that you can’t measure something without changing it. The mere act of observing a phenomenon alters it, so, in a sense, you can never see what would have happened if you weren’t there at the time.

Surprisingly this doesn’t just apply at the Quantum level. To measure the air pressure in a tyre, you need to let some air out. Taking somone’s temperature with a conventional thermometer means that some heat will taken by the instrument itself in order to give a reading.

I’m not sure we can conclude that there’s a definite law here, but there might be an empirical one. And it might apply to things in the past as well.

Our visual history goes back as long as art has existed. Maybe 50,000 years or more. Cave paintings around the world give a vivid, if stylised view of ancient times.

But while art in the form of painting has given us glimpses into life through the ages, and photography even more so, there’s nothing to compare with the immediacy and impact of moving pictures. When you have a film of a historical event, it is, literally, just like being there.

Well, within reason. Although the horrors of crimes against humanity can be seen on film, it’s fairly safe to say that watching the images in the comfort of a cinema, living room or news organisation is certainly not like being there. Nothing could be.

But to what extent does the ability to capture historical (current at the time) events on film and video change things? I suspect that the answer to that is, quite often, completely. You can break this down into three different effects.

First, there’s the effect of having a film crew at an event. This can change things in various ways. People behave differently when there are cameras around - especially if they know that they’re from a big news organisation. Proof if this is when you get demonstrations in non English speaking countries, and yet protagonists might carry banners in English and not the local language. They’re doing this, of course, to get noticed and to get their message carried across the globe.

Then, there’s the the restraining effect of having cameras at an event.

Let’s imagine that in some location, somewhere, there’s the possibility of an egregious abuse of human rights by the ruling authorities (or by some party in a regional dispute). Is this more, or less likely to happen if news cameras are clearly visible? No wonder news crews are often efficiently shepherded away from likely trouble-spots by news-savvy government PR teams.

The effect of the medium

Finally, and this is where it gets less obvious and possibly more interesting, there’s the effect of the medium itself.

To understand what I mean here, just imagine any news event from the 1960s. The chances are that it was shot on 16mm film, with all that implies: a somewhat low-resolution picture, grainy and full of dust, hair and various artefacts associated with the medium. (Of course not all 16mm film looks like this - it can look quite wonderful in the right circumstances, but by the time it’s been captured in the field, developed and telecinied for use by the broadcasters, it could look pretty rough, if you were to be strict about it.)

But whatever the reasons for the way it looked, the fact that it looked like that is what is indelibly stored in your brain. It would be the easiest thing in the world to fool someone into thinking your film was made in the 1970s by shooting it with a 1970s camera on 1970s film stock. Sure,  the fashions are a clue too, but you see what I mean. The look of the film is the look of the time.

The same goes for videotape as well. Standard definition, NTSC, PAL, 405 line: whatever the standard, it has a “look”. There’s even something rather “early 2000s” about the first high definition footage shot ten years ago, although you’d like to think that the higher the resolution your recording medium, the less the impact on appearance of the scene.

In fact, this might be something that we now have to get use to: extremely high resolution and accurate recording of historical events. I wonder if this will change things. Will we see things differently when - in a hundred years from now - our recording of today’s events is as clear as looking through a window?

Maybe. But what will influence us more than that will still be be the combination of what we choose to film, and what we’re allowed to.