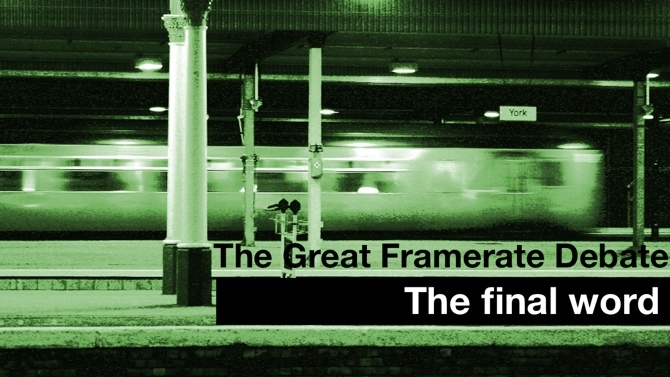 We've had a fantastic response to our series on the effects of different framerates. Phil Rhodes has the final word - for now!

(Note that the views here are those of the author, and not necessarily those of RedShark)

Part 1 of the series is here

We recently had a very interesting comment come in from reader Scott Hooson, referring to my recent article on frame rates with a note of concern over the psychological and physiological effects of various filmmaking techniques.

Perhaps most interestingly, Scott refers to research done by the estimable Douglas Trumbull during the development of the 60fps Showscan film system which found that his high-definition, high-frame-rate pictures created physiological effects in the audience, including changes to heart rate and skin resistance (basically, sweating). It's probably true that this is an under-discussed if not under-researched area, and I'd be the first to affirm that my dislike of stereoscopic 3D is based primarily on the fact that it very nearly always makes me feel unwell. I've wondered in the past if the glasses required for current 3D techniques should really be considered a medical device, and whether the whole system has been adequately assessed by people with appropriate qualifications in opthamology. It seems likely, at least, that there is a proportion of the audience whose brains perceive, with greater than average sensitivity, any mismatch between focus distance and (apparent) convergence distance, and that this proportion of the audience will consistently suffer ill effects from current stereo 3D systems no matter how good we get at the technology and the craft.

I think Scott's also right to reinforce the (perhaps obvious) point that capitalism is a significantly distorting factor in this situation. Regardless of growing audience apathy, a lot of people are currently making a lot of money out of stereoscopic 3D photography. There is published research on the subject (which you can read on the PubMed database at http://www.ncbi.nlm.nih.gov/pubmed/22733100  and http://www.ncbi.nlm.nih.gov/pubmed/22974235 ) which only really dealt with ostensibly minor and temporary things like asthenopia (eyestrain), nausea and headaches, and I don't think it's being suggested that watching stereo movies will cause permanent injury. Nevertheless, it's moderately well supported (and empirically believable) that people who are making money out of 3D do so knowing very well that they are making more than half the audience feel, to varying degrees, ill.

So, it's fairly clear that filmmaking techniques can have psysiological effects, and that the film industry is, at least in part, more than willing to overlook potential negative health outcomes to make money. On the face of it, that's pretty scary, and if stereo 3D goes to its grave in the same way it has several times before I probably won't need to wipe away too many tears.

The thing is, it's been pretty obvious for decades that films can affect us both psychologically and physiologically. Almost everything does, given the close interaction between how our brains perceive the situation around us and prepare our bodies to deal with that situation. I'd be dismayed if a suspenseful scene in a well-made horror movie couldn't raise the heart rate and lower the skin resistance of an involved audience, and we've all twitched in our seats as something unexpected happened. This is desired, it's a goal, and we've been doing it long enough to be reasonably confident it isn't doing anyone any long-term damage. I don't think any of this is a reason to make the blanket assumption that film should not have any physiological effect on people. That's probably both impossible and undesirable.

In a wider context, humans constantly do things which have physiological effects on them, from dieting to drinking to making love to drinking coffee. Some of those things – sex and alcohol spring to mind – are legally regulated, because we are conscious of their potential negative consequences, but I don't think we're anywhere near needing to do that to, say, high frame rate film and TV production. Even so, the dubious situation with stereo 3D suggests to me that it's not impossible for a filmmaking technique, of whatever sort, to be developed which would require some sort of regulation. After all, nobody does subliminal (Lightworks!) advertising anymore.