Technology: There are probably big discoveries, just round the corner 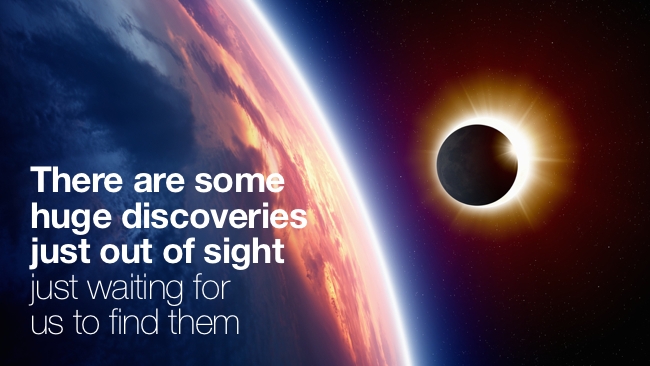 Big discoveries just out of sight

History shows that we don't always see the big discoveries coming. The technological landscape can change overnight and there's never been a better time for this to happen

Very few people really understand quantum physics. I certainly don't, although occasionally I feel a slight glimmer of comprehension that lasts for a few nanoseconds until it disappears into the mental fog again. Actually, it might be that nobody at all really understands it and all it is, is a reasonably self-consistent mathematical model that looks like it resembles the behaviour of the real world as long as you squint at it from the right direction. And as long as you don't mention gravity.

Well, to the relief of almost everybody, including me, this is not about quantum physics. But it is about something that resembles some of the effects of it (and might ultimately be caused by it). It's about how we are sometimes completely baffled by certain phenomena, until we drill down to a level of detail that was invisible before because we couldn't see it with our current technology, or because we didn't know we should be looking in that direction. And because we're not looking in that direction, it is possible - not to say likely - that there are bigger discoveries than we are currently looking for just waiting around the corner.

You can see this happening all over the place. Before our predecessors invented the wheel, the idea that you could move something easily by merely pulling or pushing it must have seemed absurd. Friction was much too big an issue, the expectation of which was ingrained into our neural pathways. A cart with wheels must have seemed like an anti-gravity machine. And yet it seems obvious to us now.

In a slightly different category - one where things do work but still don't seem obvious to us - is anything to do with electricity. Even though we pretty much accept that it it is an actual phenomenon, it's not easy to understand how it works - mainly because it consists of things (electrons) that we can't see, unless they collide with the phosphor on a cathode ray tube screen.

But although electricity might not be easy to get the hang of, you can certainly learn a few rules and tricks that don't depend on you seeing electrons. A glowing light bulb, or the motion of an electric motor are macro effects that we see at our level, without necessarily being able to give an empirical (or "observed") explanation.

At least when it's explained to us it makes sense.

Going digital is another conceptual leap that can lead to head scratching, because it's pretty abstract.

In the analogue domain, we're always told that you can't unmix things. And yet with digital, you can do exactly that. You can put sixty four audio signals down a cable and unmix them, perfectly, at the other end.

If you tried to do this with analogue audio, well, it just wouldn't work. Mixing signals is always additive. How does it work with digital? The signals squeezed into the cable by clocking through through as many times faster than real time as there are channels of audio.

How do you unmix the signals at the end? It's because each of these numbers, or Samples, are put into the cable in a known order, and/or they can be identified individually. There is no sense in which they are mixed together. Numbers can't be blended together. So all you have to do at the other end of the cable is break out samples channel one and put them on a cable called "1", bring out the samples for channel 2 and put them on a cable called "2" etc. They were never mixed in the first place.

What makes this hard to understand is that all of this happens in real time. What you hear is audio, one stream for each channel. They can co-exist on a single wire because the signals on the wire (the numbers relating to the individual samples and channels) are labelled and sequenced.

Remember, if you put the numbers 3, 7 and 12 into some computer memory, they don't all blend together to give you either 22 (the total) or 7.33 (the average); they just stay separate because they are concepts, not some kind of semi-viscous numerical liquid that congeals into a bigger blob when more is added. It takes digital electronics to separate them.

To someone who doesn't understand digital audio, seeing separate signals coming out of a single cable will seem impossible.

And from where we are now, it is very likely that there are things, possibly just around the corner, that will seem miraculous to us when we see them for the first time.

So, whatever you do, don't think that we've nearly discovered all we can, or even that the pace of progress is slowing down. It isn't. It's speeding up. And it's almost certain that just around the corner will be things that will baffle us at first, and still more that we haven't discovered because our current models don't even encourage us to look in the right direction.