If you want to get the best out of digital, buy an old film camera. 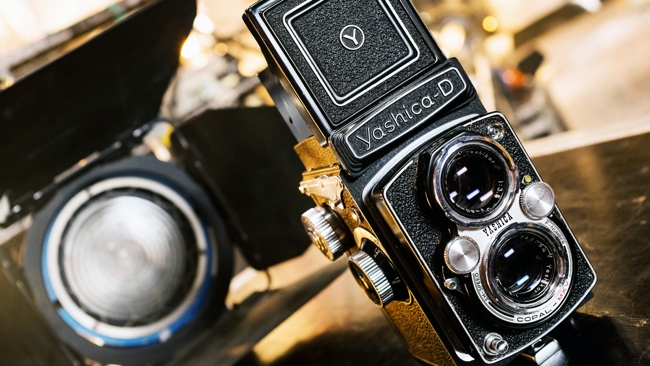 You should buy an old camera

I was in Leeds this week and I came across a wonderful photographic shop. It only sold vintage cameras - including the Zenith SLR that was my first SLR when I was seventeen. This camera was a quite remarkable device, because it cost very little and not much short of a nuclear explosion could stop it working. I have proof of this. I bought a Russian telephoto lens, which felt like it was made of depleted uranium, and once left it and the camera on the roof of my car. I drove off, and didn't notice until I saw the camera and lens in my rear-view mirror, tumbling along in the road behind me. Apart from some fairly deep dents and scratches (in the road) it was fine. The lens still worked as well, although when you zoomed in it felt like a pepper grinder.  It's probably in a land-fill somewhere now, ready to take some more pictures as soon as someone finds it.

I couldn't tear myself away from the shop. There was something about the beauty of the cameras and their sheer permanence. I'm not completely sure what I mean by that but maybe it's that none of these cameras had any software in them. No updates, no bugs. No electronics, even. Everything you need is there, and if it breaks, it's fixable.

I was drawn to a shelf with a row of stately-looking Medium Format cameras. Mamiyas, Hasselblads, Yashicas. All of them looking like they had every intention of being around as long as Stonehenge.

I'd buy one of these

I am seriously considering buying one of these. They're not expensive (until you start using them) and the pictures are wonderful. I have a friend - a proper photographer - who has a Mamiya, and there is something quite indefinably good about the pictures. Maybe it's shallow depth of field. Maybe it's the sheer size of the frame. And almost certainly it's because of the nature of chemical film.

I spent the rest of they day checking my phone and pecking out emails on my 4G iPad, as usual. But just for half an hour or so, I was transported  to another place where the world seemed different, and better in some ways.

In a completely unplanned way, we seem to be having an extended discussion in RedShark about the merits of analogue vs digital. It's like once we started it, we couldn't stop. But it's OK, because it gets right to the heart of what we do when we work with creative imaging - moving or still - in these mercurial modern times.

Very recently, we looked at why some people prefer the sound of Vinyl to the demonstrably more accurate sound of a good digital recording. I know that this is a real thing. I know dedicated audio enthusiasts, fiercely intelligent, and entirely logical in their outlook. They still prefer the sound of what is by any scientific measure (apart from human preference) an inferior medium.

If you look at the comments to the article you'll see there's a common theme. It is that when records were made primarily for vinyl, they were made differently. Specifically, they were mastered in a different way.

If you've never worked in the audio business you could be forgiven for never having thought about mastering. It's a very important process.

When a record is made, there will be a master tape. It will be a two channel stereo recording. It will be the best quality that the sound recordists could make. But it won't necessarily be the best recording to make a record from, because consumer recording mediums have different properties. Vinyl has a limited dynamic range. You can't have sounds that are too loud, or the grooves in the record will bump into each other, and it's also possible to make the needle jump out of the groove. So vinyl masters took this into account. They might also acknowledge that the needle moves slower through the groove as it gets closer to the centre. So that's why you often find the gentle ballads near the middle of the record.

CDs, on the other hand, only carry numbers. They're all represented by the same size pits on the surface of the optical disk. 999 doesn't need a bigger pit than 000. There's no issue with the centre of the disk.

So you can have loud sounds at any point. And this is where the trouble starts. According to the feedback on our vinyl vs digital article, record producers and mastering engineers conspire to make the audio on CDs as loud as possible. It's quite possible to hear a completely differently treated track on a CD to a Vinyl record. No wonder a lot of people prefer vinyl.

Now that's perhaps a specific issue with audio recordings, but another point came up, which is kind-of a superset of this one. And that is that people behave differently depending on the characteristics of the medium. Vinyl records were around for so long (and are still all playable!) that their vagaries and their foibles became embedded in our culture. We anticipated them, compensated for them, and rejoiced in them. We turned them into advantages. These are the nuances that digital can (but doesn't have to) loose.

Turning back to video: it's sort-of the same with film. And possibly nowhere more intensely than with old cameras.

Old film - and even modern film - wasn't perfect. Neither were the cameras. But put them together with a talented photographer and you get a magical combination. I don't think there's an art critic in history who has rejected a photo because it was shot on film and not digital.

With digital, you just take as many shots as you like. If you have a 4K video camera you can take as any as sixty per second and then just choose the best one.

But if you know that each picture you take is going to cost you $10 by the time it's processed, then everything moves more slowly, and so is different. And possibly better.

And obviously this is applicable to moving image film as well, except more so. With movie film, the costs are so high that every shot will be planned to the finest detail. Surely that has to make it look different.

I was brought up on analogue but moved to digital at an early stage. I was using digital audio in the early eighties, and digital video in the early nineties. So I'm pretty steeped in digital culture.

But looking at those old cameras has made me think differently. I'm sure about it. There's no reason why people can't spend more time composing their shots, and applying old-fashioned analogue thinking to digital photography and film making. Whether or not only film can truly look like film, we can certainly act as if it were. That doesn't mean we have to wait overnight to see the rushes, but it does perhaps suggest that we should be taking more time over our shots, and taking more care with them as well. I certainly had to do this when I started. My first cameras didn't have any kind of exposure meters or autofocus. I had to use a light meter. I needed to understand film speed, aperture and shutter speed. This took some time to learn but I learned practically and it became second nature - even to a seventeen year old. I took a lot of pictures in some some woodland near my Parents' house. It was a fantastic laboratory to practice lighting, with strong, contrasty, dappled sunlight and then completely different conditions on a grey day. (I found that overcast days were best for photographing detail in tree bark or flowers, because the light was more even and analytic.)

A few years later I visited Berlin. This was a long time before the wall came down. The place was electric: two superpowers facing each other across the street. I was able to visit the East because I had a friend in the Military. I took pictures in the East and the West. Today, the ones that I can still find have a quality to them that is timeless, and yet firmly identified with that time. They have an incredibly presence. This was photography at its most basic, but perhaps most real.

This is a complex discussion. Some digital cameras are very good in low light. That makes us behave differently as well. It's just one more reason not to take the same amount of care over a shot. Maybe even if modern cameras are sensitive enough to take landscape shots in candlelight we shouldn't be using this ability unless it's an emergency. Maybe what we should be doing is setting up our lights (or looking for the best natural light) carefully and precisely, just like we used to do, when we were trying to avoid wasting film.

I suppose what I'm saying here is that we've built up an awful lot of knowledge that has been hard-won over around a century of making films and even longer taking photographs. Most of this knowledge was moulded by the nature of the medium. A lot of what we learned was good. Quite a lot was bad. But we don't have to throw it all away just because we're working digitally now. Digital brings new freedoms, but also the temptation to think that little of what we knew before matters now. I think it's a shame if we act like that.

Old cameras are bargains now, and, mostly, they're as good as they've ever been. If you want an oasis of tranquility in this increasingly frantic modern world, go out and buy one.