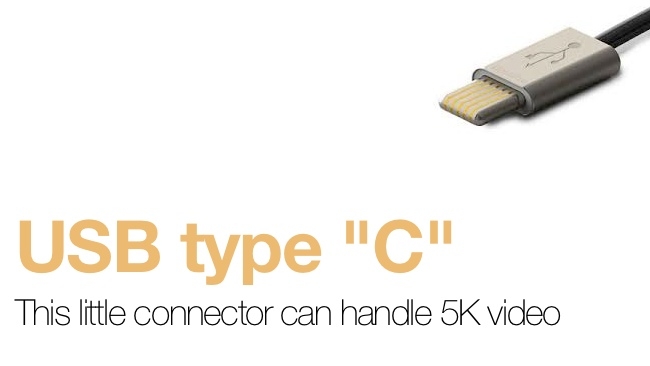 Rumors of a new 12in slimmed-down Macbook Air have revealed details of an eye-popping capability for the new C-Type USB connection.

The new Macbook Air, if the rumours are true, will have only two ports: a 3.5mm headphone/microphone socket, and a new type of USB port.

Unlike previous versions of (full size) USB, it will be smaller and also reversible, meaning that it will no longer be necessary to invert a USB cable before insertion because it was always the wrong way round the first time you tried.

But an article in Apple Insider suggests that the new USB standard might be capable of carrying not just 4K video but 5K at 60Hz. This would make it a perfect match for a new 5K Apple Cinema monitor.

According to the Apple Insider piece:

“USB 3.1 Type-C also supports "USB alternative modes," which essentially enable a different, non-USB signal to be sent over the same physical port. This will explicitly support up to four lanes of DisplayPort (including 1.3 HBR signalling for up to 32.4Gbps of bandwidth), as well as providing compatibility with standard HDMI, VGA and DVI signals. “

This would be sufficient to support a 5K display at 60 Hz with 24-bit colour. This is beyond the capabilities even of Thunderbolt 2.

Speaking of which, it is being suggested by Apple watchers that the new Macbook Air will ship without any Thunderbolt support. In a way this is surprising because Thunderbolt, which was jointly developed by Apple and Intel, has been strongly featured on Macbook Pros, Airs and Mac Pros. But the Air has always existed in a slightly different space in that it’s primary differentiator has been mobility: sheer processing power and connectivity have come in second place to small size and lightness.

Interestingly, USB Type C connectors can be used for completely different purposes than facilitating a USB connection. They could potentially be used to carry a PCIe-type signal, which would largely obviate the need for Thunderbolt in the first place, albeit necessitating some different connections on peripherals.

It’s always a nuisance when yet another standard and yet another connector appear on the scene, but there are clear benefits to this one (and unclear ones as well - it does seem to have a lot of potential uses) and the old connectors were quite simply too big. The pressure for smaller, lighter, slimmer devices is means that there isn’t going to be much sentimentality over a connector that’s been around essentially unchanged for around sixteen years.