Testing Lightworks with an SSD-based workstation 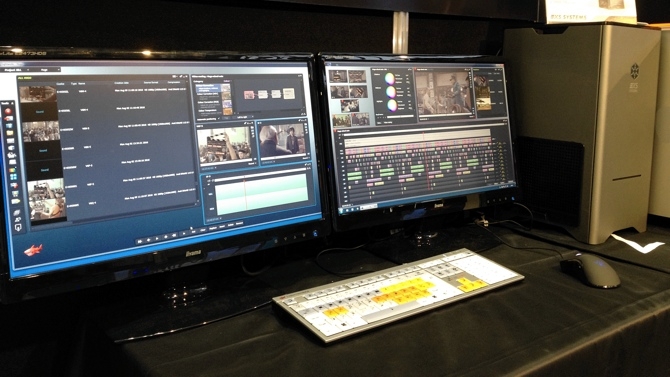 Solid State drives have plummeted in price over the last year - more than 50% in some cases, and there's no telling whether this trend will stop. We test a high-performance but affordable system with an SSD media drive

SSD prices have even been falling faster than hard drives - although this metric has been distorted by the unusual rise in HDD prices caused by the flooding in Bangkok.

Of course, per gigabyte, SSDs are still much more expensive than HDDs, but if you look at value rather than price, then things are becoming much more competitive. This does all depend on how you define "value" but for video editors, this surely has to include speed.

Speed means more real-time streams of video, better scrubbing, and perhaps better reliability and safety for your media, because using a fast SSD might eliminate the need for striping HDDs. HDDs that are striped for speed lose any type of redundancy, and actually increase the risk that you will lose your media because if any single drive in the array fails, it will cause a loss of data on all the drives.

What's it like using an SSD-powered PC workstation in the real world? We borrowed a system from Scan in the UK and tested it with Lightworks. It was then given a gruelling two days demonstrating Lightworks at the UK's BVE North Show in Manchester.

Scan is a specialist supplier of PCs for gaming and content creation, so their systems are at the top of what you can expect for an expertly-configured workstation. We asked them to supply a computer that did not skimp on speed, but which could be kept to an affordable price. We figured that you can always build a faster PC, but the cost rises very steeply beyond a level, that that was the set-up we aimed for.

We didn't do any extensive lab testing because we simply wanted to get a "feel" for the capabilities of a powerful but affordable machine.

How did it perform?

Overall, it felt very speedy. Almost everything - except rendering, which was itself very fast - seemed to happen almost instantly - pretty much as you'd expect with an Intel i7 processor with 8 x 3.54 GHz cores and an Nvidia Quadro 2000 graphics card with 1GB RAM.

Another very big plus point: It was virtually silent. This is exactly what you want in an edit suite.

We tested the computer's ability to export to various formats. Our source material was one minute of DNxHD, and in all cases, all cores ran at between 85-97% while exporting.

Storage speed (given a massive boost by SSDs), a powerful graphics card (the Nvidia Quadro 2000 in this case) and a capable processor (the Intel i7 with 8 x 3.54 cores) add up to an extremely powerful workstation that's not exactly cheap, but extremely realistic - especially, for content creators, in the absence of any significant new updates for the Mac Pro.