This could be a great 4K monitor for filmmakers: Dell UP2414Q 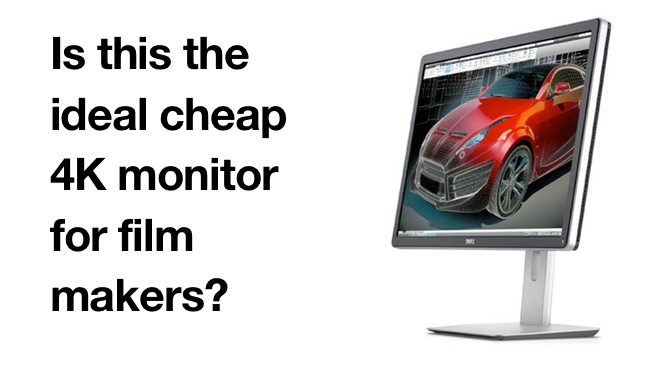 I'm spoiled when it comes to monitors. To date, I've used Dell 2405FPWs as workstation displays and occasionally, with reservations, as video monitors. These increasingly venerable displays are ten years old next year, as the 05 model number implies, but are still around and still moderately hard to find, for a reason: they use a TFT technology, S-PVA, that is considerably better than average in terms of consistency when viewed from various angles, circumstances that other technological approaches find tricky.

That said, there are problems with gear of this vintage. They use cold-cathode backlights, limiting colour quality and increasing power consumption over more modern LED backlights (and increasing weight, which is an issue when carrying cheap computer TFTs as secondary displays on set). Perhaps the largest problem is that there's no HDMI input, only DVI. On the desktop, this is a non-issue, since it's possible to convert between the two with a simple adaptor, though there are some signal formats that more modern HDMI devices use which the 2405 can't handle.

Time for an upgrade?

These are issues affecting many TFT displays from the mid-to-late noughties, many of which are now likely to be begging for an update. Basic 24-inch 1080-line monitors can now be had for considerably under £100. With quad-HD displays ducking under the £500 mark, though, there is the potential for a more significant, but still affordable, upgrade.

One such display is the Dell UP2414Q, based around the same LG panel as several current 24-inch 2160p displays. While there are some things which can be done in the drive electronics to improve the performance of a TFT panel, the absolute performance – particularly the colorimetry and off-axis viewing characteristics – are more or less set at manufacture. Two things about this panel are of particular interest. 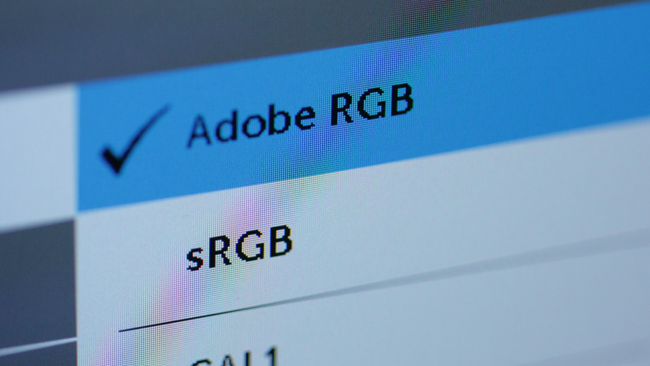 First is Adobe RGB colourspace support. In practice, a wider colour gamut means that the red, green and blue primary colours are a little deeper than would be normal for a computer monitor, many of which are set up to reproduce the more limited sRGB colourspace. sRGB uses the same primary colours as the ITU Recommendation 709 standard for HD video displays, which are notorious for having been defined largely based on what's achievable with phosphor-based CRTs. Adobe RGB is intended to offer better coverage of the CMYK colours available to print workers, but it also works as a partial antidote to the Rec. 709 problem, defining more saturated primaries, particularly green. Dell supplies the UP2414Q, which has an sRGB setting for backward compatibility, set to Adobe RGB, which is arguably a poor choice because most people will plug it into a workstation that expects an sRGB display and simply enjoy the resulting over-saturated colours, but that's a user-education problem.

Adobe RGB is indirectly useful to filmmakers. Most video DSLRs appear to encode Rec. 709, or (oddly) 601 primaries, and probably only things like the Magic Lantern firmware and RAW recording would allow full access to the wide-gamut primaries of a 5D Mk. III as a video camera. Adobe RGB is really intended for still photographers and print people. That said, anyone looking to monitor DCI P3 colourspace on the cheap will find that Adobe RGB covers a lot more of it than sRGB does, raising the possibility of software calibration to a more accurate (though still incomplete) DCI output.

The DCI red is deeper than Adobe, and the green more yellow. One other thing that Adobe RGB coverage implies is very complete coverage of sRGB and thus Rec 709, which is probably only limited by the performance of the backlight.

Speaking of which, the second key thing about the LG panel in the UP2414Q is that it has GB-r LED backlighting, an approach to the colour performance problems of white LEDs which involves both green and blue LEDs coated with red-emitting phosphors. This is not quite as desirable as full RGB LED backlighting, but it's very considerably better than white LEDs alone.

Given these technologies, the improvement in gamut is very obvious, with deep blood reds, ruby and crimson colours available – which is counter-intuitive, since Adobe RGB actually defines a very similar red to sRGB (out by 0.03 in the CIE 1931 y axis). Perhaps the improved backlight performance is influential here. The improvement in greens is more predictable, particularly where green begins to shade towards blue in colours, such as the deep turquoise of a tropical sea, a notorious problem area with less capable equipment. Anyone who's seen a digital cinema-oriented setup next to a conventional sRGB display will be used to this sort of feeling, but viewing a side-by-side comparison of two monitors with such different capabilities delivers an immediate education into what one has been missing. 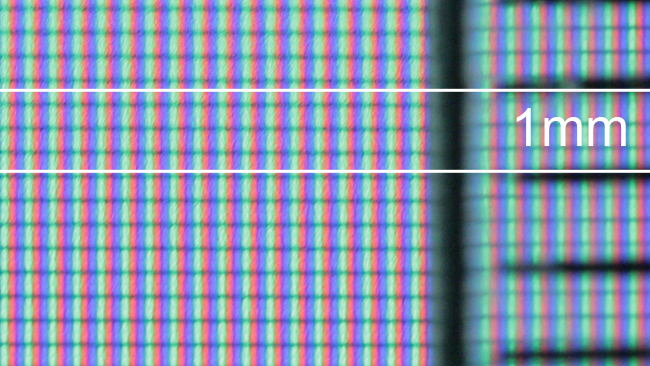 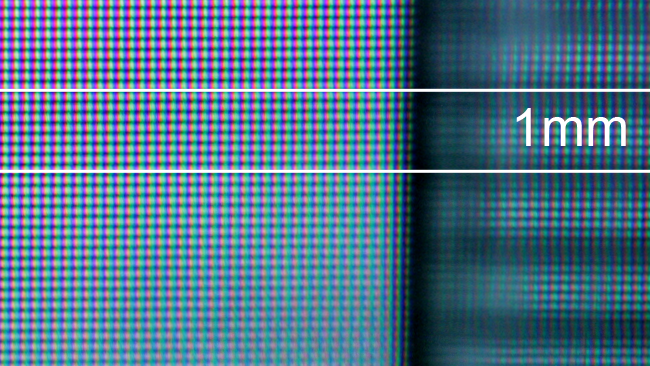 Dell clearly takes the colour and contrast performance of this monitor seriously, supplying a factory calibration report claiming an average delta E of less than 2. Delta E is a measure of colour difference where, very simply, a difference of less than one (or two and a bit, depending whose study you like best) is considered invisible to most observers. In fact, the UP2414Q's peak error in greys, primaries and secondaries in Adobe RGB is only just over one, which is pretty respectable for a £500 display. In fact, it'd be pretty respectable for a decent OLED broadcast monitor at literally ten times the price, so what's the catch?

Well, as with many TFT displays, and especially those using IPS technology, it's viewing angle. The old Dell 2405FPW, with its S-PVA display panel, has really superb off-axis performance, with contrast shift well controlled from even the most acute angles. Not so the UP2414Q; there is significant white glare when the display is viewed from off-axis in the vertical, although the horizontal performance is better. From any angle other than straight on, the calibration claims are dubious in the extreme (though it looks good from straight on). 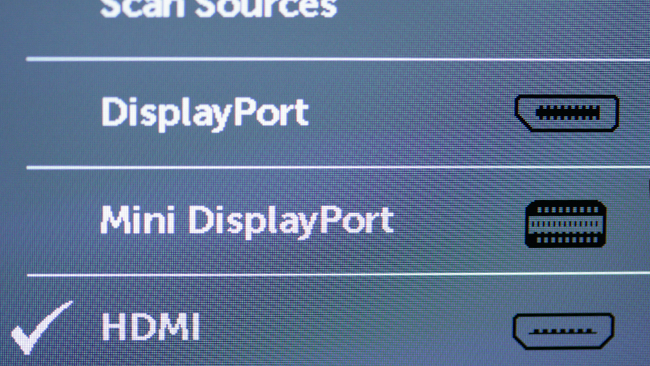 The only other setup issue concerns sheer bandwidth. The UP2414Q supports only HDMI 1.4, which only has the bandwidth for 30Hz updates at 3840 by 2160 (though it is the first revision to actually support quad-HD and 4K).

Higher refresh rates must be supplied via DisplayPort and Dell supplies the display with the option for DisplayPort 1.2 switched off. This is required for refresh rates above 30Hz in DisplayPort, although toggling it on is easy and the 60Hz options immediately become available. As a potential on-set monitor, the 30-frame limitation is perhaps less problematic, since high frame rate shooting is rare, though anyone shooting quad-HD beyond 30fps will need to supply the signal via DisplayPort.

While the market for quad-HD-compatible converters handling SDI and HDMI signals is not really mature, there are already ways to take a quad-HD SDI signal and turn it into HDMI that the UP2414Q should display quite happily (we'll try to look into this in the near future). Blackmagic's quad SDI to HDMI 4K converter should handle the task, for about two thirds the price of the display. Regrettably, there is no 4K HDLink equivalent, with lookup table capability, at the moment; this could have made good use of the monitor's wide colour gamut capability.

Is this display right for you?

The purpose of buying this display, as a filmmaker, is to make critical noise and focus assessments either on a live camera image or in post, and this it will do nicely. It is not a grading display and we should not expect it to be for the price, although the extra colour capability is nice. The irony is that as a workstation monitor, the sheer resolution makes it feel small. The absolute spatial resolution, pushing 180 dots per inch, approaches that of print media and text looks fantastic. This is perhaps not as useful on the desktop as keeping the graphics at the same absolute pixel dimensions and considering it as a larger workspace, though to do that, it really isn't a physically large enough display; text ends up too small. For a workstation display, then, get the 32-inch version. But for a newly affordable way to monitor 4K pictures, especially on the move and with the nice surprise of that on-axis colour performance, it's a decent piece of kit.